*With a tip of the sailing hat to Judith Viorst and Alexander’s Terrible, Horrible, No Good, Very Bad Day. 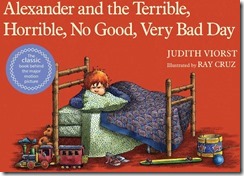 OK. Just let me be up front, our enforced stay in lovely (some people’s favorite stop) St. Augustine has made both EW and me a tad very testy at times. On the worst of days, both of us were testy and discouraged at the same time. Fortunately, usually one of us is upset and the other one has perspective so we recover fairly quickly.

I am thankful that Stew was indeed the larger person on the morning of my birthday.

I have a two-day-a-week office job, usually Sundays and Mondays, but this week I had to swap with the full-time person and worked Wednesday and Thursday. Now, I truly have no ownership of the 24 hours that is “my” birthday. After all, I share the day with about 19-million folks and some of us have to work. So, trust me when I say that actually going to the office didn’t bother me. In fact, I had a great day at work.

It was the getting ready that flummoxed me.

I had to get up by 6:15, had prepared the percolator the night before and planned a fairly relaxed 45 minutes before EW took me to shore for my shower and bike ride to work. I woke up at 5:00 and could not get back to sleep. I had also stayed up later than EW the night before. These facts are important as when in the states, we purchase 2 or 3 cards for the other and secret them in places to be found in the morning. EW had no opportunity to do that.

In the meantime, I discovered that the $30.00 I had gotten in “change” during a grocery transaction the day before was missing. I (quietly) began a search of every bag, all the pockets in my man-purse, and pretty much all spaces probable and improbable. That’s not an amount that will inhibit us, but it really made me mad—at myself—on a day when I had been taking stock of all the things I had not accomplished since my last birthday. So I was ready for a blow-up.

I started to prepare for my day, scooped up my favorite (and one of the most valuable) pair of earrings, stomped through the boat and heard one of them fly through my loosely clasped hand. The second frantic search of the day began at about 6:30. I needed a flashlight, and our go-to light was not where it is supposed to STAY and that necessary third search of the day set me off from pissed-off-bitch to possessed-woman-spewing-venom. I woke EW up, trying to contain my bile as he didn’t deserve it (though he had miss-placed the flashlight), used another light, found the earring and got ready to go. All the while I told him what had been going on with me, trying to keep my tone neutral and give his neurons time to wake up.

He prepared the dinghy. I prepared me and my gear (including lunch, a coffee, and my shower backpack) and off we went to shore at 7:10 in the morning. Just one mooring later I signaled him to turn back as I had forgotten my flipping SHOES! (At least I knew where they were.)

In the meantime, he maintained his cool, wished me a happy birthday, and tried to stay out of the line of fire. On the way in he casually mentioned he had “found some cards in your backpack”. I, in turn:

1. Didn’t even question what he was doing in my backpack

2. Immediately jumped to the conclusion that he was talking boat cards which I thought we were out of—because I hadn't ordered them as promised.

3. And started apologizing for not ordering any new ones. (Because, after all, I was a horrible person.)

He remained silent. When we got to the dock, he handed me my backpack and I asked him if he had taken the cards as he should have them (after all, I didn’t deserve them). He rolled his eyes and refrained from saying, “You idiot!” before explaining that he had placed all THREE (!) BIRTHDAY cards in one pouch in my pack, thinking I’d find them when I got ready.

So we paused at the stone bench and I opened my cards. One with a cute dog, one with the promise of wicked behavior and this one—which in the infinite wisdom of the universe, I opened last. 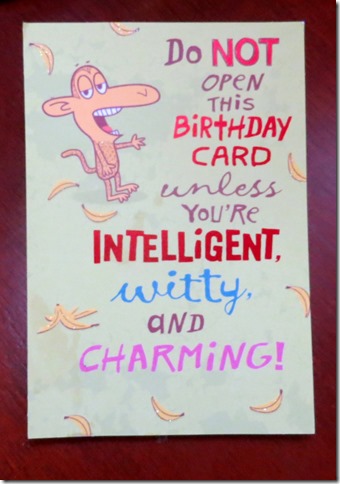 I stared at the card.

I looked at EW.

And we laughed. We laughed and hugged and I did open it (despite wondering if I’d get immediately struck by lightning.)

But I didn’t get struck by lightning. And I kissed him and apologized and had a really great day. And he forgave me and came ashore after I got out of work and we went out to eat together, and listen to music together, and watch the Red Sox together for a while.

And they won. And I had wonderful awesome birthday messages, a super great card from Kathy, and a song from Judy and Stephen. And my Terrible, Horrible, No Good, Very Bad Start to my birthday became another funny story about living together on a boat.

I am indeed a very fortunate person. I need to remember that.

I’m also a good person who just had a bad day. I need to remember that, too. 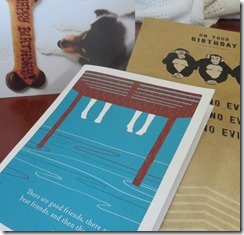 Posted at 12:10 PM in Boat Projects, Maintenance, and Parts, Living Aboard, Relationships at Sea | Permalink | Comments (3)

Perfect!
A quote I use to slap myself (lovingly) when I think I’m having a bad day comes to mind:
“Did you really have a bad day? Or did you have a bad 10 minutes, that you nursed for the whole day?”
Yeah, I’ve been known to do that...
Happy Birthday Barb!!

Such an endearing post, thanks Barb for writing the words that me and others sometimes feel too! Happy Beautiful to a beautiful woman and friend.
Love,
Cathy