Home Archives Profile Subscribe
We are Claiming our Dream and it is....Cleveland
Living in Limbo

No, I'm NOT Used to this Weather

Yes, I know this isn’t the coldest weather Florida has seen. (The most recent worst winter here was in 2010—when we passed through on our way south. Coincidence?)

Yes, I did live aboard this boat—year-round—for seven years in Maine and thrived.

No, this hat is not a good look for me. 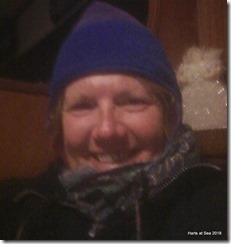 Here’s the thing. When I lived in Maine:

I know the Northeast is having a horrible winter and yes, I’m delighted not to be living at below zero temperatures.

Here in St. Augustine, we are on a mooring in a very bouncy Matanzas River (Disclaimer: Today is Thursday, January 4th and it is not bouncing. The prior three days included north winds with gusts to 50. Bouncing.) This is the coldest weather we have experienced since February 2010. How cold is it? We had ice on the hatches this morning, and the laptop would not start until I had brought her to shore and warmed her up. Bitch.

My dear land friend, Lynnelle, thinks we are crazy and asked whether we were alone. Heck, no. There are folks who have arrived via boat for the fourth year who usually enjoy spending the entire winter in St. Augustine. There are others who timed their stop for the holidays and Nights of Lights. And there are others who have been stuck waiting for the weather to change because the only thing worse than living aboard in this is moving in it.

Let me count the ways:

That’s enough. I am not really complaining. (OK, maybe a bit.) This is not the coldest winter Florida has had, but it’s the coldest I’ve experienced aboard since 2010 (when we had all the comforts noted in 1-4 above. I know that dear friends are now enduring the storm Grayson, and a number of these friends are living aboard. It will not be fun. It will be horrible. They will have much better stories and much higher ranked bragging rights.

And we are fine. We have a propane heater that keeps us comfortable when we are up and bundled  (all those layers.  And we are both sleeping surprisingly well at night. I figured out why. We have so many blankets that we’ve created our very own weighted blanket which evidently helps alleviate anxiety. What, me worry?

This too shall pass.

Love you guys! This, too, shall pass.
-6° right now and falling, but we are cozy in our tiny apartment in Maine!

It hit us a low as -3° in Grand Forks. We too shall survive!

Hi Barb and Stu,
So much has happened since we last saw each other in Gozier...Guadeloupe...many Lunas ago.
Would love to chat with you both.
We are now landlubbers in Florida until early February then heading for crazy times in Louisiana for Mardi Gras!
Would love to hear from you both!
Sue and Dan
Former Canadian sailing vessel Triumph

I'm not used to this weather too! Great post, dear. Stay warm!