We are Claiming our Dream and it is....Cleveland

On December 16, EW and I will have been in St. Augustine for two years, which would we absolutely awesome if we were ready to leave—but we are not. We are determined to be out of here in May, though because there will be no more hurricane seasons in Florida.

A Dream Must Be Specific (But may be subject to change.)

When we set sail, we were truly living our dream and incredibly excited, and we felt that way for 99% of our first five-years of cruising. (That 1% represents a brief moment in time during the “Endurance Crossing in 2014”.) We are still living our dream but a cruisers’ dream is not a fairy tale. Boats break down. We get health issues. Boats need repair. We find bad weather or it finds us. Do you have any idea how many things can go wrong in this cruising life? Most of us can imagine the worst, but I’m talking about those things you don’t think about, like an infestation of bugs, or losing the dinghy motor overboard, or (and this happened to at least one person I know on Facebook) you are knocked down by a severe reaction to lime juice and sunlight.

Seriously, be careful with the lime juice. Here’s an article that starts with “When life hands you limes, don’t juice them outdoors.” Who knew?

Sometimes during these past two years, I’ve had to keep reminding myself that we are still living our dream. But, then I hear of someone who must sell their boat due to family or health issues, or those who lost their boats during this horrible hurricane season, or even those whose life partner has decided they are done cruising—and I know that I’m living my dream and that EW feels the same, and I am incredibly thankful.

Claiming Our Dream Motivated Us When We Lived Aboard in Maine 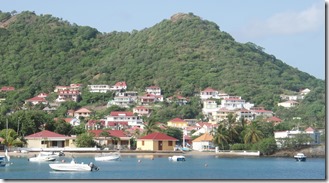 So, what did we do back B.C. (Before Cruising) to keep us focused? We planned and plotted and researched destinations. We imagined anchoring La Luna in a beautiful Caribbean Harbor, or going through Scotland’s Caledonian Canal, or sailing into Quebec City. Deshaies in Guadeloupe was the first Caribbean anchorage that met my dreams, we have not yet opted to go to Scotland, nor did we get to Quebec before we left the northeast. Still dreaming and planning and plotting—claiming our next adventure is what keeps us going while we live the dream of the live-aboard (boat project and working) life here in St. Augustine. 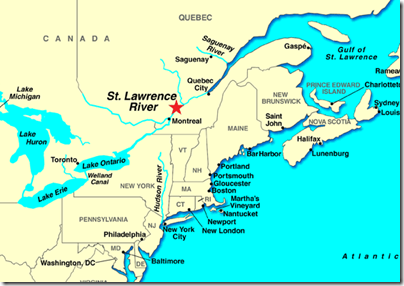 Well, EW still continues to surprise me after over 33 years together. One day this summer we realized we would not be ready to set sail in 2017 and began talking about where we would go if we left here in the spring of 2018. Here are his exact words, “I’ve always wanted to sail to the Rock and Roll Hall of Fame.”

Really? Can we parse that sentence?

Define “Always”. Well, the museum didn’t open until 1995 (10 years after we were married) and I’ve never heard him say this. So I’m not sure when his “always” started, but I’ll let it go.

“Sail to”  Since I didn’t grow up on the Great Lakes, I keep forgetting that one can actually sail to them from here. So yes, you can “Get the-ah from he-ah, de-ah”, as my dad would have said. You can, but it’s a heck of a sail.

As for the Rock and Roll Hall of Fame, it’s not on my bucket list, but I’m game. (Heck, I was willing to sail to Gambia!) I’m sure Cleveland will be interesting, and there are a lot of great stops along the way. (Such as—ta-da!—Quebec City.) Now, we are still in the planning stages and cruisers know that living the dream requires us to cast our plans in sand but here is what the 2018 dream looks like right now.

Current Plans for 2018 Include the Following

I make a bunch of money. We fishing the decks, get the bottom cleaned, and get new rigging. (Both of us have a lot to do to make that happen.) Then, we leave here and sail as quickly as possible to Maine. This may require going to Bermuda, or going to Providence, or just going. Yes, Maine people, we plan to stay a couple of weeks to see as many of you as possible and to eat lobster. (Alas we will be too early for corn on the cob.) From Maine we’ll head to Nova Scotia, again bypassing many “must do” stops for other cruisers, and aim for Cape Breton Isle and the Bras d’Or Lake, where we will spend a week or so. W will exit to the north, and sail into the Gulf of St. Lawrence, where we will spend time with whales and visit Quebec City. (See, I’m getting something out of this.)

By mid-August, we will transit the St. Lawrence Seaway which will take us from the ocean to Lake Erie. (How cool is that?) Watching the weather, we’ll sail to Cleveland and dock just steps from the Rock and Roll Hall of Fame! Seriously. I mentioned this dream trip to folks who sailed to Florida from the Great Lakes. Guess which was their favorite stop before getting to the Erie Canal? Yep. Cleveland and the Rock and Roll Hall of Fame!

From there, we’ll again watch the weather (the Great Lakes scare me a bit) and skip back to Buffalo and EW’s family, plus take the mast down before going down the Erie Canal. Down the canal (down my foot – EAST again) and down the Hudson to New York City, where we plan to have a bit of time for to play tourists before heading south to the C & D Canal and more touring and family in Baltimore, Annapolis, and Washington D.C.

It’s ambitious, and we have a lot of things to get done before we can go, but this will certainly keep us motivated and focused. Right now, this is the dream we claim for 2018 and we're going to do everything we can to make sure it happens—after all, it’s apparently something EW has always wanted to do.

Well, well, it is officially public! Can't wait to see the comments about taking down the mast....

Yeah to your dream. I think the Hall of Fame induction is in April and the river is no longer on fire. Quebec City is one of my favorite spots so you will love it. My family got there a bit early - in 1628 - and then sailed a similar route on the great lakes for beaver and furs - so you will be following in my "voyageur" relatives' footsteps. If necessary, I have met several cruisers who have wintered in Toronto - they say its not too bad since the marina is surrounded by large buildings and a wall to block most of the winds! Plus you get all the nice Canadians as neighbors. It will be lovely to sail Windrifter to see you and La Luna where ever you end up in Maine. Wonder how difficult it is to head south to New Orleans?

I grew up on the Great Lakes. They are tougher than they look. Fresh water is so much nicer than salt, though.

Sounds like an awesome adventure. Our dream for 2018 is that La Luna ties up at our dock when she makes the Annapolis area. I'll keep the guitar in tune!
Cheers!
K&D

Yes! Sounds like a great plan! Ours? Well, having two functioning eyes in my head is top of the list. You heard we're parking Sionna and returning to Maine in January to accomplish that? *Shiver...!*
Then? Get to somewhere - anywhere - that isn't south Florida for a while, and isn't in the USA would be a close second as well. Can't wait to follow your adventures!

Sooo... if the trip includes the ICW through SC I'm trusting we'll get to share a beer or something here & then, hopefully, another one when we both get to Maine.

Glad to know water will be moving under your keel again!

Hey Barb and Stu (EW),
You must sail northern Lake Huron...ie...the north channel...best fresh water sailing in the world!
We’ll be in London, Ontario for the summer and can provide you with many gunkholes... Barb, this could be one of your best sailing adventures!
Sue and Dan
Former sailboat Triumph