Home Archives Profile Subscribe
Post Irma Spam—Part One
Where Did We Go Right? Every Step of the Way

Boat Projects and the Cruisers Who Live Amongst Them.

EW was actually very upset that the boat was not finished when we moved back aboard. I never expected it would be and had already started contingency planning. Hey, we’ve been married for 32 years and we’ve lived on a boat for 15 of them. This is not my first rodeo. 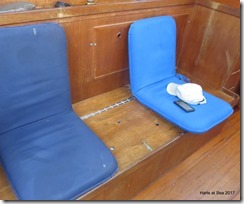 The port settee is our living space. We have two ratcheted cushions for seating and there’s an American Gothic feel to our meals as we eat side by side, facing the same direction. I could go on, but just let that sink in. 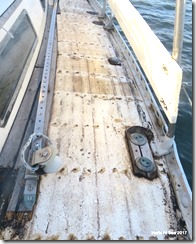 Now, non-boaters might think that repairing the toe rails and stanchion bases, and removing the teak decks would have no impact down below. Non-boaters would be wrong. Ninety-nine percent of the things on deck are bolted through the deck to the living space below. EW has had to remove the genoa track from both sides of the deck (non-boaters, imagine a long, narrow piece of stainless steel with holes every inch or so.) Now imagine those bolts going through the deck and into many parts of the boat because it’s really long…from master stateroom to the galley (or pilot berth on the starboard) to the main salon. At a dam angle.

In fact, here’s a photo before it was removed. (To the left near the cabin.)  And yes, I know they aren’t exactly an inch apart, but there are still at least a thousand nuts and bolts to deal with here. (Do NOT shake your head at me. It will seem like a thousand when we put them all back.)

Side note, these were removed with the volunteer (?) assistance of Matt from S/V Kook Cat and Tim from S/V Scout. I will be the volunteer when we put the tracks back on. Also, a small piece of duct tape was placed over each hole and every blessed one withstood the hurricane.

How the Deck Job Messes Up the Cabin

Removing it impacts the bookshelves next to our bed, both clothing lockers, the aforementioned pilot berth, every cupboard in the galley and the three cupboards along the port side that are also used for food and dishes. On the starboard side, we have a slightly different configuration so the cupboards are not impacted.

Add the stanchion bases and other random parts that had to be removed and you know why we are living in (somewhat) organized chaos. We didn’t even bring the main salon cushions back to the boat. Lest I make this sound sad and trying, note that EW is more bothered by this than I am. He feels he should have been farther along, and I am delighted he is fully back to normal and able to do so much. As for the mess, I am resigned and calm and having a “make it work” moment. Most of the time.

Barb at Sea Loses It

When I assured EW that I was OK with it. That I’d make it work. That we’d do just fine. (Cheesy grin.) I also said. “You can have the bed we aren’t sleeping in and you can have the entire dining space, table and seats and under the table. I (well we really) get the galley, chart table, and port settee for living.” Both of us were a bit surprised to find out how sincere I was. I have never once complained about the mess on the dinette side of the boat, but let him leave one box of screws out overnight on the living side...whoo-eee…I surprised myself with my vehemence.

His tools and screws haven’t  trespassed on the port side since. 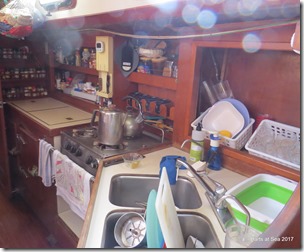 Note the lack of cupboard doors in the galley because—genoa track. And you see pretty much all the dishes I have for the duration.