Irma Was Not a Help

NOTE: While I had every intention of getting these posts up in a timely fashion, time is skewed after a hurricane event—even one during which we have sustained no damage. We are now getting into a routine on the boat, we’ve moved back to our (inspected) mooring, and life is getting back to normal as we know it. Let’s look back at the week a couple of weeks:

The Plan for Moving Back Aboard

We were fortunate to have found an apartment to use from essentially June 1-September 13 and we are grateful beyond words. Even though the boat projects aren’t done (not by a long shot!), we were delighted to move back aboard.  I had planned the moving project with great care for the Wednesday, September 13 move.

1. EW agreed that Thursday the 7th would be his last day for working on projects and that he would spend Friday clearing up his tools and debris so that I could spend all of the weekend and some of Monday and Tuesday getting the boat ready for habitation.

2. We decided to rent a small storage locker and store all the things that we didn’t need when living on a project boat (and way too many things that we hadn’t yet decided to get rid of). Do note, some of those things to be stored were in the apartment and some were still on the boat.

3. We decided to rent a cargo van that would allow us to move in one go.

4. We agreed to bring La Luna into the dock at St. Augustine Marina so that we could get things on and off more easily.

It wasn’t going to be easy but it would be organized, planned and doable by two crazy cruisers used to living an adventure.

Plan B for Moving Back Aboard

1. We watched Irma obsessively and worried about our many friends and relatives in her path. (Our anxiety 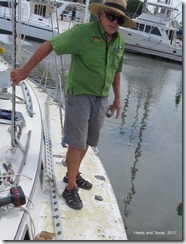 levels peaked in that time between Irma hitting St. Thomas and us hearing from EW’s cousin Jeff and Barb Hart the First—they are fine. They also made it through Maria with few issues.)

2. On Monday the 4th and Tuesday the 5th I started calling marinas and boatyards from St. Augustine to Georgia and found “no room at the inn”. EW had removed a bunch of bent and broken toe rail (some from Matthew most from an incident at sea) and had a lot of holes in the deck. His priority was to get the new toe rail on and it did not go well—even with steady and patient help from our friend T.S. (who prefers to remain anonymous—those aren’t even his initials).

3. Within those two days, we learned of  “Not Really a Marina” a never used tiny marina with floating docks in an excellent location up the San Sebastian River. On Wednesday the 6th, EW called me and said he and T.S. had decided we needed to move the boats NOW to make sure we got a spot at Not Really a Marina. I agreed and we spent the rest of the morning moving the boats. EW then went back to toe rail because…holes.

4. By Saturday, the boat was secure, the toe rail installed and the holes filled. We had numerous invitations for

evacuation out of St. Augustine, but after talking with other tenants in the building elected to stay and invited T.S. to join us. By this time, we expected Irma to come near us as a CAT 1; we and the building were good for that. We continued to watch the weather obsessively, the guys watched a bit of football, and there was a pre-hurricane party and sandbagging

5. Hurricane Irma happened to St. Augustine. As one local explained later, “It was a wind event. The flooding event was similar to Floyd, but the wind was worse than Matthew.” Good to know. The apartment lost power for 2.5 days, the boat did great, most of the docks on the St. Augustine marina were destroyed or severely damaged (worse than Matthew), 8 boats broke free from the moorings, Conch House Marina—which never recovered from Matthew—was destroyed, and a few boats/docks were damaged on the San Sebastian River. We walked over to the boat the day after Irma hit when it was still pretty windy. I had never seen wind waves with whitecaps going upriver before and could only imagine what it looked like at the height of the storm. (Due to Irma going up Florida’s west coast, St. Augustine got wind from the south. They aren’t used to that here. I’m not used to anything hurricane here.)

So, on Tuesday the 12th, we still had no storage locker, nothing had been moved back aboard, the boat was still a mess and dirty, and my head was spinning. Thankfully, our kind landlords moved our drop-dead moving day to Friday the 15th.

Stay tuned. Moving back aboard made for a fun day. 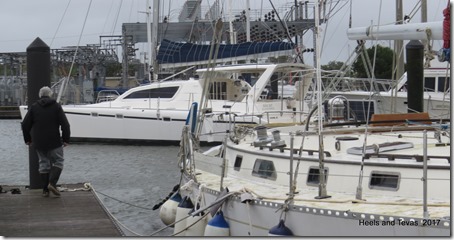 One last check on the lines before Irma.