It all fits together.

Let’s start with the Bikes. Soon after we arrived in St. Augustine, I imagined EW and me riding around town on lovely old-fashioned bicycles. (There are no hills here.)

It didn’t happen. Our friends Kirsten and Rocky from S/V Nightmusic bought a bike for Kirsten while they were in town last year and left it here under EW’s care. I had trouble riding it and thought that I may be the only person in the world who forgot how to ride a bike.

This year, Malcolm and Laura from S/V Thistle were here for 6 months and purchased two second-hand bikes from a thrift shop. We bought them when they left. “Bluebird” has wide handlebars, big tires, and (at first) a low seat. I considered the ability to plop my feet down the adult version of training wheels and spent a bit of time over two weeks to get comfortable. Yesterday, EW raised the seat and I’m a real bicyclist.

I like it so much that I found myself smiling while biking and this morning I passed my destination because I was enjoying the ride.

(I smile more and my basket is smaller and in the front. Plus I love dogs. Other than that, I feel like this when I’m riding my big girl’s bike.)

That brings us to Radio. One of the reasons I’ve not been prolific on the blog is that there are a whole lot of important things pulling at my time now that I am a “liveaboard” instead of a cruiser—particularly a working liveaboard. I’m working to make money so that we can fix the boat and become cruisers again, socializing with cruisers, spending time with EW, and doing all the normal life things one does—except I live on a boat on a mooring and we have no car.

This morning I had a networking breakfast at 8 and a live interview on a radio station at 11:30. They were only a mile apart so I rode my bike to the first, stayed at Café Bistro and worked, and rode my bike to WSOS, 103.9 for the interview. 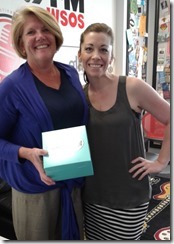 EW said I did well. It’s been a long time but evidently, I haven’t forgotten my media voice either. During the half hour interview punctuated with cool oldies music (Allman Brothers and Rolling Stones to name two), Nicole and Kevin mentioned cupcakes. Specifically, Sweet City Cupcakes from St. Augustine. I love cupcakes so I rolled with it.

After the interview, Nicole said, “Wow, I suppose since you’re on a bike, you can’t take the cupcakes.”

“You really have cupcakes?”

“Yes,” she said, as she opened a cupboard and presented me with a box of four beautiful cupcakes. I told her I would find a way to carry the cupcakes, and I did.

However, I had to make a stop at Rype and Readi, one of my new favorite St. Augustine haunts, to pick up fruit for a fruit salad. There was no room in the basket for the fruit, so EW got a call.

“Honey, can you come in and pick me up --- and meet me at Rype and Readi? I have my bag and cupcakes and can’t add the fruit.” Since EW’s bike has no basket (yet), I asked him to wear his backpack. Cupcakes may have motivated him to agree but probably he would have done it anyway, 'cause he’s a nice guy.

So I purchased a half watermelon, a pineapple, and strawberries, and Sebastian gave me three ripe mangoes, and I waited for EW to arrive. I had my purse/laptop case and the cupcakes in my basket and the bag of produce waiting for EW. He rounds the corner and I wonder why his backpack straps are invisible.

He looked at me, “You know,” he said, “On my way over here I remember the backpack and thought, ‘You had 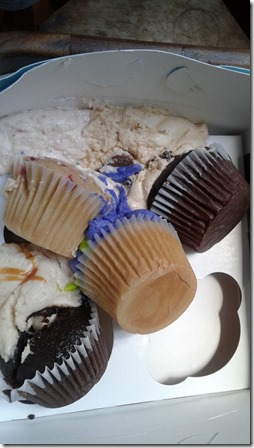 So, we put the fruit in the basket, put the cupcakes on top, and dangled my heavy bag from the handlebars. It worked.

I have learned, however, that small bike baskets are not the best place to carry cupcakes. I may have to get a large basket in the back like Miss Gulch. (And no, I am not going to get a small black dog to ride back there. He’d only eat the cupcakes.)

For lunch, I put the cupcakes on a plate and reapplied the frosting. They were not pretty but I assure you they were delicious. The chocolate one with peanut butter frosting was our favorite. Evidently, at one point it looked like this 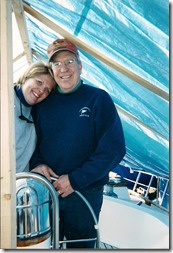 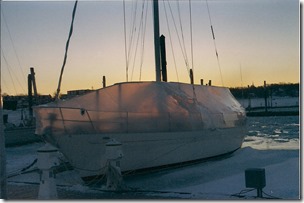 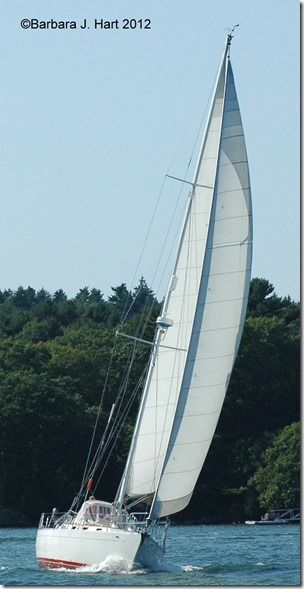 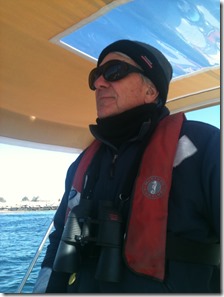 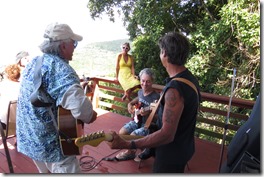