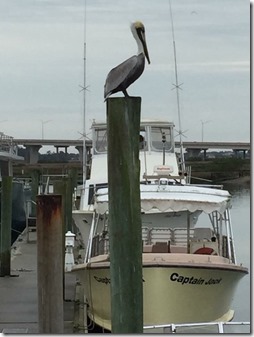 Liveaboards live on board.

All cruisers are liveaboards but not all liveaboards are cruisers. I think I’ve explained this before.

Please note:  though none of my spell checkers have caught up with reality, “liveaboard” is one word in our world. There’s even a Facebook group to prove it.

Living aboard is different from cruising. I miss cruising. We have cruising friends here in St. Augustine. They come down from the north to get warm or come up from the south to do boat work and get used to 60 degree days before going to Maine. (Just kidding. Kind of.) The point is, that there are few folks like us who live on board and work here, and many more who are moving north and south—albiet very slowly once they reach St. Augustine as this is a very sticky harbor.

We are liveaboards and I am working three gig jobs which equal one and a half full-time jobs and we’ve been dealing with EW’s health issues (all is great there) so my work days have been interrupted and I have spent hours during the past four weekends either working or helping EW.

I have often felt as busy as that run-on sentence while I have not once felt like a cruiser.

Until Saturday. That’s not to say we actually moved the boat; we are still on the mooring and will remain here until we haul her this summer. But on Saturday I felt like a real cruiser.

First of all, cruisers don’t have land vehicles. We use dinghies and public transportation to get ashore and get groceries. (Oh, the buses and “taxies” I’ve been in throughout the Caribbean.) For cruisers—whether you go by dinghy or bus or have the grocer come to you in an ulu—getting groceries is an adventure.

On Saturday, I had to get groceries and took

the dinghy to Cat’s Paw Marina, a distance of about a mile and a half by water. It felt wonderful. I even took my little shopping cart to help me transport all my goods back to the dinghy. We’ve done this B.M (before Matthew) with no issues but I didn’t realize that Hurricane Matthew had pretty much destroyed the dinghy dock and filled in the mud on the back side. I blithely dinghied to my normal out of the way docking spot and promptly got the dinghy motor firmly stuck in the mud.

Well, I promptly got it stuck. I got it firmly stuck when I stood in the stern and tried to raise it out of the mud. (Blond much?) The attendants came my way with offers of help, but I waved them off. For one, I was not a paying guest and for two there was nothing anyone could until the tide came in. Instead, I tied the dinghy with a spring line in addition to the bow line so that Lunah Landah wouldn’t get punctured by the four big ugly bolts sticking out of the broken dock, and went to Publix.

Upon my return, I purchased a bag of ice from Cat’s Paw Marina and dumped it into the cooler bag, bought a bottle of water, and sat in the shade to Facebook for a while. Also, I called EW who remained calm and asked only that I raise and check the engine before simply starting it.

The tide rose as the tide always does.

I wandered down to the dinghy, observed that she was floating (though the engine was still very close to the mud), and (this proves I learn from my mistakes) got into the bow, untied the lines and used my hands to push Lunah Landah to the deep end of the shallow dock. I did not move to the stern and raise the motor until I canoed the short distance to the good dock. 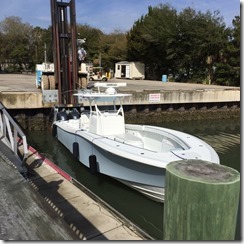 Cat’s Paw Marina has a few slips with large power vessels and stores all other boats on shore in a hanger, lifting them out with a huge forklift. Mark, a boater and fisherman, was on the good dock washing his boat prior to having it lifted. Of course, he wanted to know what was going on. Evidently, he doesn’t normally see a woman paddling an inflatable with one oar from the bow. Go figure.

I told him my sad tale, lifted the motor so we could look at it, and asked if he thought I should hose off the mud.

Our little Tohatsu (of whom I’ve not always said good things) started right up and only bled mud for about 30 seconds.

Life in St. Augustine is great, EW is much better, and I haven’t forgotten (or learned to disdain) the joys of the cruisers’ life.

You may quote me anytime you want. Hope to see you on your way north. Hugs