What Not To Say After a Hurricane 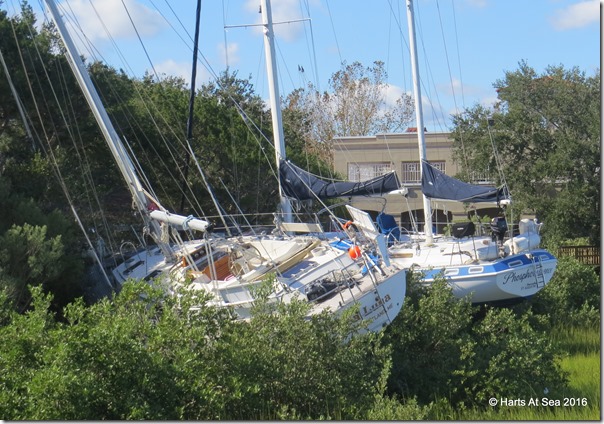 First of all…the St. Augustine community, the cruisers, the marina staff, everyone we have met during the past year, and especially our friends have been outstanding post-Hurricane Matthew. Please note that this is a time of stress for pretty much everyone in this community, whether boater and non-boater. It is heart-breaking to walk down any city street to see most of a home’s belongings piled in the yard. Cars and homes were smashed by trees; sewer water flooded stores, restaurants, and homes; and boats broke free to crash into docks, on shore gazebos, other boats, bridges, and mangroves. One marina was nearly destroyed and St. Augustine City Marina has major damage. They are not accepting reservations for at least a few weeks. 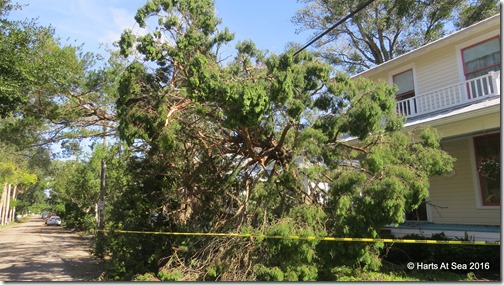 We are cheerful, optimistic, and helping each other. One of our favorite bars got up and running in two days, and is asking for Home Depot and Grocery Store Cards for their staff and clients who lost nearly everything. Another woman purchased cleaning and personal care products and made up 50 bags to give to those who need them. People are helping each other. Stew and I are certainly grateful every day for all the help we’ve received.

Still, some people don’t get it.

The first was a local boating lady who stood to one side and listened as I talked with David at the marina just after seeing our boat. David already knew La Luna’s location and was appropriately and sincerely concerned for us. I told him the boat was in great shape and we just had to figure out how to get her back in the water. As he walked away, the woman turned to me and said, with deep sympathy, “What kind of boat was she?” I was not in the mood. “She was and still is a Cheoy Lee designed by David Pedrick. And don’t talk about my boat in the past tense.”

Oops. Guess she struck a nerve.

The Facilities Manager of the Bayview Retirement Center where La Luna ran ashore kept making a joke about all his new boats and how he was going to put a rope around them. I was not pleased. After dropping our anchor to shore (a signal that she was being tended and not available for salvage) we learned that Florida actually has a law that prevents others from claiming your boat for salvage. (First Florida boating law I’ve liked.)

Gawkers have wandered down to the waterfront and usually joke a bit before they realize it is our home they find so droll. I pretty much handle that just fine. The St. Augustine Police Department has been amazing, first going out in a vessel the day after the storm to seek lost boats. They came to us during our first visit to La Luna, moved close enough to read her name and converse with us, and offered their condolences. They also made sure she was our boat and took our contact information. Other police officers have stopped by to check on us and the boats. Last I heard, the SA PD found 29 boats and posted their names and  coordinates on Facebook so the owners could find them.

EW and I love the Coast Guard. I have two wonderful, brilliant, and accomplished nephews who have made their careers with the Coast Guard, and we have met many other members of their force in our travels. My recent favorite was the CG plane who flew over us on our way up from Panama and who contacted us. Sure, he was probably trying to determine if we were drug runners, but we had a delightful conversation.

Unfortunately, communication skills were lacking in the CG crew who showed up in a truck when EW was aboard La Luna. Like the SAPD they came within speaking distance and said, “Are you leaking oil or gas?” That was it. No, “Good morning, Captain, is this your boat?” No, “I’m very sorry to see this.” No nothing. EW answered in kind. “No, we are not, but frankly that is not my first concern.” They left.

Now that the storm is over, some folks who weren’t affected want things to get back to normal pretty darn quick. There have been Facebook rants by area venues asking the public to give them a break. Evidently, some folks are ticked that the free concerts held on St. Augustine Beach have been suspended.

Really? That’s a problem for you? The person who posted the rant suggested that everyone worried about their fun take a measuring tape out to four feet and make a mark around every room on the ground floor of their home. Now imagine all of that stuff wet with sewer water. Get over yourself.

The lovely catamaran we are now guests aboard is on the north dock which has no power so EW and I are currently onshore charging all electronic devices while I write a couple of posts. This vantage point lets us listen to David Morehead respond to the calls from folks who are anxious to start their cruising adventure and want to include the beautiful city of St. Augustine. Some of them have been rather insistent that David provide them with a mooring or slip. At least one implied that there weren’t a lot of options nearby, and David suggested he check online to see the area damaged and why there were few options.

And for those of you who love music, don’t mind the smoke, and have a place in your heart for the Trade Winds—The Oldest City’s Oldest Bar—they will rise again. When we walked past two days ago, a crew of bar staff, patrons, and friends were removing everything from the bar and dismantling the stages. Already there are Black and Decker Workmate Benches on the sidewalk where soaked plywood had been stacked. We will soon listen once again to “Those Guys”, and Joe and Rusty, and Dewy Via, in St. Augustine’s iconic bar.

Give us some time, people. Some restaurants and stores have re-opened. Enjoy those and wait patiently for others.  More importantly, there are people who have lost everything or nearly everything. If you can, help them. We have lost nothing except water under the keel. Just like the Mary Ellen Carter, La Luna will sail again. In the meantime, treat those of us in St. Augustine, Flagler, and points north with a bit of sensitivity. We have maintained our sense of humor, but some things just cut a bit too close to the bone.

In closing, I will resurrect a comment the musician Fond Kiser made when we were discussing our first year in St. Augustine. He had just moved back here from Austin when Hermine joined us. I mentioned that we had arrived in time for the area’s coldest winter in years, hottest summer on record, and now a potential hit from a hurricane in an area known for being safe. “Hmm,” said Fond in his charming accent. “The city may want to take up a collection to pay to have you move out of town.”  After Hurricane Matthew, they may want to consider his suggestion.

NOTE: The link above for the Mary Ellen Carter was performed by Stan Rogers, who wrote it. We learned it from Maine’s Schooner Fare and I have to share that version out of loyalty. (And because I raised a stein many, many times as I belted out “Rise Again! Rise Again! Let her name not be lost to the knowledge of men.”

Honest the Next Post will be about People Helping People

Peace and patience be with you through all that you must endure. As a first time Sailboat owner (Purchased 2 weeks in Annapolis before Matthew) I cannot fathom what you are going through. Even though we were on the hard and got barely a whisker of your troubles, I was still warily watching the weather diligently. I think you have an amazing attitude and totally believe your angst at the Woman and the property manager at the old folks home and all of the morons who want things righted in 2 days is spot on and that they will experience Karma. Best of luck will keep reading your Journal.

Oh and bu the way, I am a HUGE Stan Rogers fan. A man who was taken from our midst way too soon. Here is a link to him performing one of my favorites Barrets Privateers!
https://www.youtube.com/watch?v=s0CvSIhF_tA

Barbara, every time I post something fun on Facebook, I think of family and friends who are still experiencing the aftermath of Matthew, areas that are even now flooding here in NC. Yes, some of us were spared and can laugh again, but I know I must remember that not everyone is laughing, not everyone has a home or a car or a place to work--because the disaster is ongoing. Ongoing. Can you imagine?

Barb, wonderfully written. Touched many, many deep places. I am so glad that you have a community around you to help you move through the tough places.

BTW, Tommy Rowe of Schooner Fare was a college friend. I too have lifted many a pint while singing along to many of their songs

Well done, Barb. Love both your posts so far about recovering from Matthew.

So very sorry to hear about the losses experienced by you and so many others. Glad to hear you're keeping positive vibes going and recovering though!

One thing intrigued me... Is it possible the officer asked about leaking oil or gas to determine if there was a fire hazard, not just environmental hazard?

Keep your head and spirits up!

We here at the "Salty Southeast Cruisers' Net" are keeping all impacted by Matthew in our prayers. Please don't hesitate to let us know what we can do to help you communicate your needs as the recovery progresses.

Good luck with refloating your boat. Down here in Daytona we dodged the bullet that struck the heart of St. Augustine. The worst I saw here at Halifax Harbor where some shredded headsails and rubrail chafe.

I took a dinghy ride the other day south on the ICW and saw a few boats on shore and another down by the bow at a dock. I feel so very fortunate to have had my Irwin 38 CC survive at our floating docks.

Good luck to all who are waiting patiently for insurance companies and skilled trades to get around to helping you restore your floating home to condition better than before Matthew.

Thank you, Glen. It all worked out for us, though the cruising kitty took a bit of a hit, we were very fortunate.

Thank you, Win. We got lucky. Very lucky.

Thank you for your kind thoughts. You are right, they do need to ask the question and check. We clearly were safe so didn't need rescue and their next priority is the environment. Just think she needed a communication skills lesson. Ah well. All is wonderful and we are back aboard a floating boat.

Thank you, Mike Taylor. Welcome to the club. Life is great afloat.