So This Happened (Part One of La Luna Encounters Hurricane Matthew)

We are fine. We are truly fine.

The boat is mostly fine.

I asked the universe to move Matthew to the East and he moved, but not far enough.

I asked that our boat come thru relatively unscathed, and attached to the ball, and she did—but the mooring ball and tackle detached from the mooring and La Luna drifted/scooted to shore.

I must learn to be more specific. 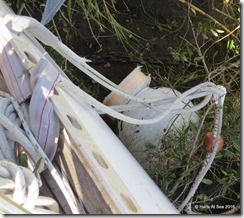 We don’t know when, but we do know that we are one of three boats in the marina (all big) who broke their tackle. Over 29 boats broke free from various spots in St. Augustine, ours is one of the least damaged, and the only one in our new “neighborhood” who did not damage anything on shore except a few mangrove bushes. We were very fortunate. 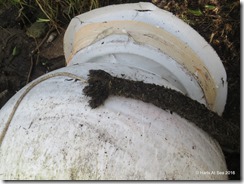 We did this. It was a decision based on what we knew at the time, the options open to us, the very strange direction of Matthew, and an engine with a problem that happened just before evacuation day. Given what we know now, we would have arranged a tow up the San Sebastian to a dock there. Instead, we prepared La Luna more thoroughly than most boats in the mooring field. An incredible number had their headsails on (shredded). Many did not take advantage of the free, very tough, fire hose donated by the St. Augustine Fire Department. Many of them did not add extra mooring lines. We did all of that.

Like the rest of St. Augustine, we did not fully prepare for an event that has never before occurred: a tide and surge so high that it washed up over the sea wall into the Marina tunnel area between the onshore showers and the lounge. In fact, when talking with the crew before we evacuated, one of them said that in 20 years he had been there that area has never gotten swamped.

This was a 100-year storm. This is the storm that reminds us that we aren’t in control; the storm that reminds us that even the best plans for living in a hurricane zone can be wrecked by a storm that comes just 5 miles closer than we wanted to generate a surge never before experienced here. We don’t make excuses, but we aren’t beating ourselves either. One of EW’s phrases is “You make the decision, and you make the decision right.” We are together, the boat is fine, and once she’s back in the water and we check the engine, she will be 99% just as she was when we left her.

That makes us very, very fortunate. 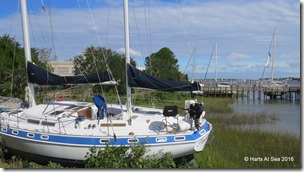 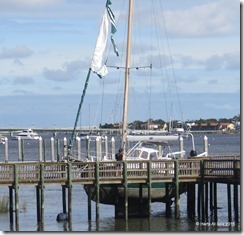 There are at least 10 boats within a few hundred yards of us. We have been meeting on Facebook or at the boats and are working together to find out how we can get our vessels back into the water. This is a puzzlement. 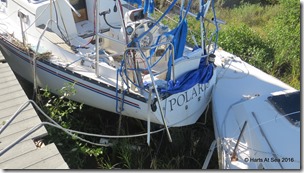 La Luna and the others floated in on an extremely large surge, over what is normally (and what are now) mud flats. Imagine a barge even getting in there, where they would be aground in 2 feet of water. Now imagine the crane lifting La Luna up and putting her…..where? Down on the other side in mud and water? Not likely. We are looking at using a trash pump and maybe air bags, to help slide her, tilted over (probably with water weights like those used to get vessels under bridges—although in our case it will be to keep the keel from plowing into the mud. 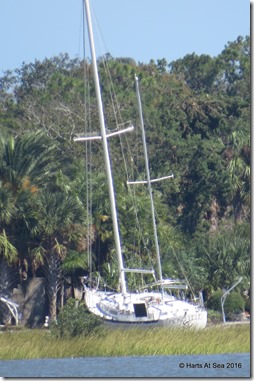 Anyway, this is what we think will work. We saw one post on Facebook that mentioned tying the line around the boat, not on the chocks. I like that idea, but not sure how it will work. Our hope is that La Luna can stay canted to port and swing around to be hauled bow out to deeper water where we will anchor. The marina will not allow any boats back in prior to checking all mooring balls and fixing the docks. Those who remained safe through the storm have stayed. The docks are badly damaged and if the north dock had failed, they could have lost all the boats in the marina.

This was a big one, folks, with a death toll nearing 600, of which over 30 were in the US.  How sad. How devastating. My heart goes out to those families. We are fine. We will get her back in the water and move home again.

Next Post: People Who Need People and the People who Help them 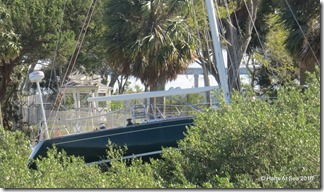 Excellent post. Sorry to hear about/see your boat that way, but also realize it could be much worse. We are in Savannah, GA, and also surrounded by boats trapped in the marshes. I am sure you will work out the puzzle of getting her back into the water.

Good luck, and I will certainly be checking back in for updates!

Oh no. That looks like a really tricky predicament. could any barge get close on a high tide? Two feet of water at high tide? sounds like a real project. Dig around and let water in? Contract with a helicopter lift? Find a brilliant local who's done this sort of boat rescue before? So sorry to see this and realize your situation is not resolved yet. Best wishes for a successful extraction. Maybe you should pray for another hurricane to lift it out. On the other hand, maybe not!! So glad you're safe and hope this resolves smoothly.

I am the captain of the green sloop in the before last picture and would like to discuss refloating options with you. Please write me as soon as you can.