Those of you who use Facebook know that we are back in the water and living aboard and very, very thankful. We also are grateful to the many who helped us, supported us, hugged us, housed us, fed us, loved us, made us smile, and provided excellent advice.

There are two parts in getting a relatively undamaged boat back into the water, 1. Paying for it; 2. Doing the Heavy Lifting.

We choose to have only liability insurance on La Luna. We believe in liability insurance for our own protection and it is required for entering marinas all over the world. Even after reading our policy, it was not clear to us that liability would help in our situation. After all, La Luna had successfully traveled on her own sometime during Hurricane Matthew and arrived in one of the best possible spots without coming into contact with anything other than mud, small trees, and mangroves. She didn’t damage anyone’s personal property, and that is all we thought liability would cover.

You who read (and understand) the fine print, you who grilled your insurance agents, you who are both boaters and lawyers or insurance agents—all of you may know that your liability insurance (in most cases) kicks in when your boat goes walk-about. We did not know that. For over a week post-Matthew we thought we had to pay to get La Luna floating again. It was not an easy week, yet we continued to be thankful, saying “Once she’s floating, she’s our home again.”

Many other boaters were not as fortunate. This tug left St. Augustine recently with Polaris, Mental Floss, Nyght-Bryte, Anticipation, and at least two other loved sailing vessels. We know Polaris was totaled. Certainly, the others on deck are secured like cargo rather than someone’s current or future dream.

Thanks to David Wiggins, marine surveyor and hurricane insurance expert sent by Boat U.S., we learned that having your big, heavy boat beached on someone else’s property is not something the landowner likes all that much, so our boat was a liability. Thanks to EW’s hours of phone calls (on a Sunday) and thanks to those agents and adjusters who reached out to us in our time of need (on a Sunday), we learned that $14,100 was a reasonable fee for a heavy boat in that predicament, (Whew!) and that our insurance would cover all but the deductible (Double Whew!).  Sunday was a very good day. Before we went cruising, we purchased insurance through Boat US, and recommend them. Once we left the country, we opted to purchase Markel Insurance through IMS Jackline Insurance and have found both the agent and the claims office to be excellent.

We lost track of the days; moving, worrying, seeing to La Luna, and trying to figure out how to move her. There is a strong Facebook Group of local cruisers here and that became the go-to method of communication. Phosphorescence was lying right next to us, but her owner was on a Cruise Ship somewhere in Panama. We messaged with him and worked with his brother and with his insurance agent, David Wiggins. EW also began talking with any of the other boaters who wanted to communicate and whose boats were near ours, nine in all.

One was “up a creek” and able to winch his boat out to deep water over the course of days with help of the extreme high tide. Others opted to go with a crane and barge from Fernandina, which didn’t actually arrive in St. Augustine until after our boats had been hauled. EW talked with a highly recommended local barge and crane company, Yelton Marine Construction.  While he is impressed with the owner and crew, it was decided that their rig was too small to handle ours in the best possible way. EW also talked with DIVECOM Marine, a salvage company from Tampa. Their method would have included skidding La Luna over the mud using a big tug and trash pump and all sorts of stuff. Again, nice guys, but not our favorite method; I am sure they were able to help others in the area. In the meantime, McCulley Marine Services arrived with an 110-ton crane on a barge and a nifty tug operator who looked like Father Time. Owner, Boo McCulley drove up from Fort Peirce to seek out business and therefore help folks like EW and me.  David Wiggins, who has worked 26 previous hurricanes, had hired McCulley previously, recommended them, and chose them to haul out our temporary on-shore neighbor, Phosphorescence. Once we met with Boo, EW immediately decided that he wanted them to handle La Luna, as well.

Time note, all of this happened before we called our insurance company. EW nailed that down on Sunday, the day the crane moved into position for both La Luna and Phosphorescence. I love it when a plan comes together.

On Monday morning it was all about the tide as we gathered along the shore, joined by a surprising and heartwarming number of friends for support. Kirsten and Rocky rented a car and drove down from Georgia, Cathy made the trek again from Amelia Island, Joe dropped by from “Camp Elkton”, and Lisa and Matt came by from a few blocks away. The barge lifted Phosphorescence first. The crew was careful, skilled, and a delight. I called them engineering Bubbas and mean that in the best possible way. The barge operator called me “little lady” and assured me they’d have the boat on the water by noon. The others all “ma’amed” me and kept dismissing my praise as just a day in the life. EW says that they were careful y treated La Luna as if she were an eggshell.

By one, both vessels were off the mud and Phosphorescence was on her way to a safe dock. La Luna was (mostly) upright and (somewhat) in the water. Unfortunately taking care means taking time and we had lost the super high tide. No worries. She would stay in slings, held in the water by the crane until the next high tide when they would carry her out to deep water as tug and barge moved to a safe anchoring spot near the dolphins to the south. It was agreed that EW would join them and stay aboard that night, while I spent one last night with Jae-p on UB I.  EW has been singing the praises of the McCulley crew ever since. Not only did they take care of our home, they worked very hard to take care of EW the night he slept on board, even to the point of making him coffee the next morning.

On Tuesday, October 18, I loaded the dinghy with the incredible amount of items we’d taken ashore before and after the hurricane, and rendezvoused with EW aboard our brilliant and forgiving floating home. Once we had tossed everything down below, the crew prepared to lower her the final six inches into the water, and then removed the slings, and towed us to a very temporary anchorage. Once again, I found myself in tears as I thanked each of them for all they had done. One of them replied, “I love my job! I get to do this and I get to make you happy!”

And that was it. Friends from Ann O'Malley's (Irish Pub, Buffalo fans, and Air B n B apartment) had offered to tow us to our anchorage near the mooring field, but our boat was too heavy and the winds too strong. We hired Tow Boat US who ably placed us in a safe temporary spot. This week we are putting things back in place below decks, cleaning, and fixing. EW removed the burst muffler and we ordered the new one. By the end of the week, we will be on our new, inspected mooring once again, living the life in St. Augustine.

NOTE: We took photos from two cameras, but the smaller outdoor camera didn’t work. Trust me, the boat looked great hung next to the tug overnight, and the dinghy was full on Tuesday morning.

The Tug, Barge, and Crane on Monday morning. 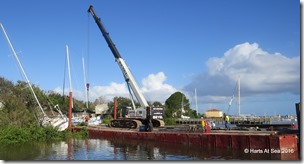 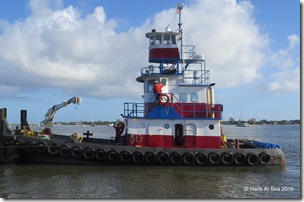 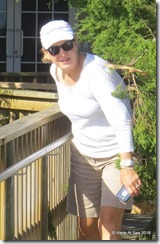 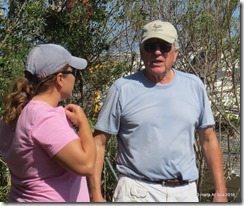 Cathy, wiggling past a downed tree on a compromised dock to give me a hug.

Photos not taken: Rocky, Joe, Matt, Lisa, and my boss and owner of the Black Raven, Gunner Hedquist. 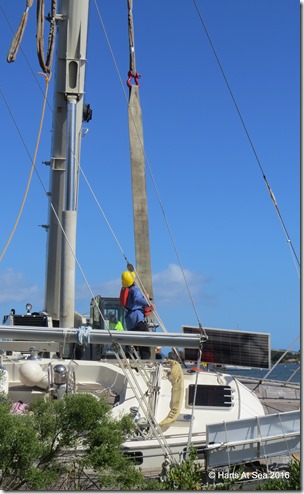 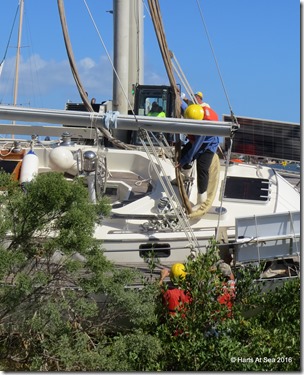 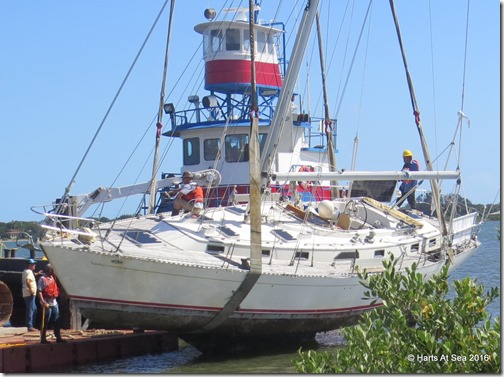 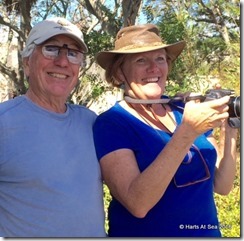 They  took great care of her while we watched, shed a few tears, and took photos. And then she was safe. 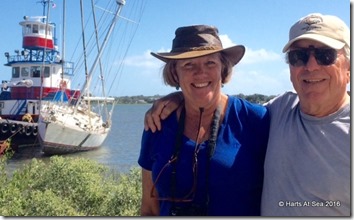 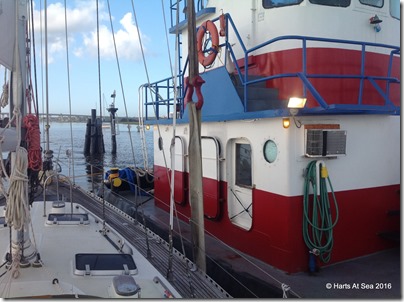 Sometime in the afternoon, they (somehow) moved La Luna from the port side to the starboard side of the tug. Once in deep water, they adjusted her in the slings, dove on her again to check for damage, and helped EW make sure all was well.

He spent the night on board La Luna, where I joined him on Tuesday.

We are so happy and relieved, but this is one adventure we never want to repeat.

Wonderful news! It all worked out in the end. So pleased for you two.

So glad to see that dear La Luna is back in her home and that you are back in yours!

Your grace under pressure was amazing - both you and EW. This was not a fun experience and I am so glad that La Luna is still your comfy home.

I am happy for you that fate btought you to our llfetime friend, Boo McCulley! You were, indeed, in the best of care....
He is a real hero, and, with his bride, Faye, at the top of our list. We are looking forward SO much to meeting up with them when we arrive in St Aug from CO next week. Best to you and La Luna.

Wow! Thank you. We just love Boo. He is the nicest man and so good at what he does. Great crew. We are very thankful