This Grey-Haired Guitarist Went to Market

Yes, it took me over seven months to get over it. I have (mostly) ceased to compare this life with that of cruising and think more often about how living aboard in St. Augustine compares to living aboard in South Portland. Both areas have a strong sense of history. One area is much more modest in how they promote such history. St Augustine can evidently claim to be the oldest continually inhabited “city” in America. (Of course, no one here counts any actual native communities in that discussion. Evidently city life in America began in 1565.) “Oldest” is the town’s favorite superlative and it’s not always used wisely. Seriously, would you want to be a patient of the “Oldest City Dentist” Think about it. I keep imagining Tim Conway in one of his old man sketches, with a dentist drill.Here he is a butcher.  https://www.youtube.com/watch?v=0ry8khR922g 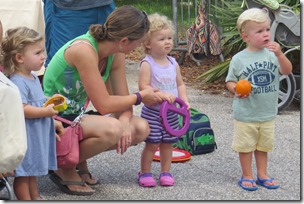 On shore, there are people who recognize us as new locals and we are now “regulars” at a number of events. Well, since the majority of our events involve music,  EW is the regular and I’m the “Band-Aid”. One of his favorite venues is the Saturday Market at the Amphitheater where he gets to stand in the hot sun and  play for over four hours with 5-20 excellent musicians. I like the market, and have made friends with some of the vendors but I opt to arrive two hours later than EW, who is generally one of the first musicians to arrive and one of the last to leave. 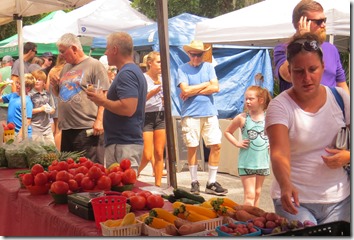 I check out all the booths, chat with vendors, and act like a professional Band-Aid by getting coffee, water, and snacks, and (once) holding music  for EW and four others learning a new song. Near the end of the morning, I purchase produce. The corn here is almost as good as that in Maine, but it’s impossible to purchase corn picked that day.

You know you are NOT from Maine if you think yesterday’s corn is fresh corn. On the other hand, you haven’t had a peach unless you’ve had yesterday’s peach from Georgia or South Carolina.

For your enjoyment and edification, here are shots of the market, and a video of EW leading the group in Teen Age Wedding. As you can tell, he tries to enjoy himself. Truly he is so tickled that these outstanding—many professional—musicians will play so joyfully with him. How can you not smile at this? One man, living his dream.

You asked for a video, you get a video.

Postscript: Small World Moment. The woman guitarist in the pink top is Lynn Healey. Stew met her a couple of months ago, and then she left St. Augustine to perform with her band. He had told me about her and she is just as nice as he said. Here’s the small world part: Lynn knows Peter Bonta and has played with Bob Perilla and Bill Kirchen—friends of Peter and LeeAnn, formerly from Two Much Fun.

And so we are reminded that the cruising life is still with us. 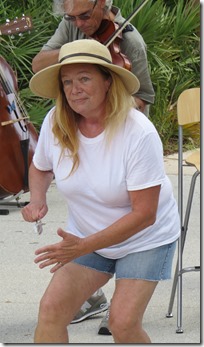 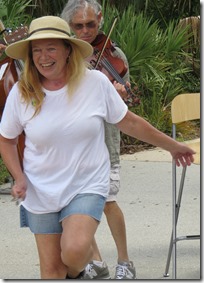 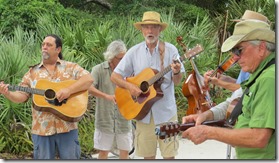