Home Archives Profile Subscribe
Have You Seen My Funny Keyboard? I Seemed to Have Lost it Somewhere.
Oh! What a Night!

1. A hot summer here in St. Augustine is hotter than a hot summer in Grenada and Panama. One might have thought (as I did) that being closer to the equator would be warmer than being up here in the southern part of North America.

2. The sun doesn’t set in St. Augustine until very late. (Well, late by Caribbean standards.) The phrase “cruisers’ midnight” refers to 9:00 or 10:00 PM when cruisers usually call it a night. After all, when sunset is around 6:30 PM, that’s about 3 hours of darkness. Here, the sun doesn’t set until around 8:30, so midnight is midnight. We rarely stay up that late, but we’ve had “issues” with our pizza/movie night. I’m just not ready to watch a movie before dark, while EW is definitely ready for pizza around 7:00. We have compromised. The pizza is usually in the oven by 7, and we start the movie during daylight, It’s not the same, and we can no longer set it up on deck unless we are prepared to actually stay up until midnight. 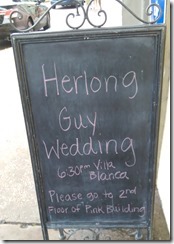 4. St. Augustine is a Destination Wedding town, about which many people say, “We’ve chosen our venue in St. Augustine”. Weddings have venues as if they were conferences or concerts. Though that began when we still lived in Maine, it has a whole new meaning here in St. Augustine. The marina office is across the street from one of the more popular venues, so we frequently see wedding parties, guests, limos, flower bedecked horse-drawn carriages, and tasteful wedding signs. This one amused us. Greatly. You’d think the person who had written it might have offered an edit of some sort. Ah well. I assume it is a happy union. (I could not resist.)

5. This is a music town. There are a whole bunch of singer/songwriters per capita, and we enjoy many of them. EW plays weekly at the open jam at the market. This week I performed as “Band-Aid” when I was asked to hold up some music for EW and four others who were learning new tunes after the event ended.

6. Working. Yeah. That job thing. It’s been a dry year in St. Augustine, but I am now moving forward with two jobs because this is a gig economy. Let me just state that St. Augustine is a tourist town not at all like Portland in that tourism is pretty much  the only industry. When you add the economy, interesting Florida labor practices, and my evidently advanced, unemployable—age the sum includes few job opportunities. I currently have two jobs, one in the store of the Black Raven Pirate Ship, and one as an HR consultant and sales for a Jacksonville company that represents the Predictive Index.

A. Black Raven Ship Store. First of all, they take pirates and colonial history very seriously in St. Augustine. At any point in time one can walk down the street

and see a fully garbed pirate, or colonial muster. (And it is “garb”. Call them costumes at your peril. They carry real swords. I am not kidding.) I am not a garbed pirate. I sell tickets to the ship’s adventures, prepare the little treasure chests for the kids, and man the counter in the store three mornings a week. These are not Black Raven Pirates. This is a few from a Pirate Krew who dressed in garb to go out on the town. This kind of thing happens in St. Augustine.

B. Through the miracle of Maine networking, blogging, and Facebook, I was reconnected with Steve Waterhouse, who had been a consultant in Maine many years ago. That lovely man remembered me with favor and offered me a consulting gig with his organization, Predictive Results, which consults and sells the Predictive Index. I can work from the boat, and make calls on potential clients in Florida, Maine, Massachusetts, and nearly the entire country. I will most likely focus in North Florida and perhaps a bit in Maine. In the meantime, I’m learning more about this very interesting tool for employee assessment and strategic management. I am also learning a whole new business vocabulary, having nothing to do with belaying lines, hoisting sails, or navigating though coral heads. It is no secret that I’m a short-timer with the Pirate Store and will resign with plenty of notice once income from PI is a constant.

7. Technology. It’s been a recurring theme. Those five years created all sorts of gaps in our knowledge. We each have a cheap AT&T Android phone and I am beginning to grasp how smartphones have taken over. I actually said to someone this week that the best way to reach me for social things is to text. I used to hate texting. Texting was the way you could reach your refrigeration tech, and not good for much else. For some reason all marine refrigeration techs do not answer their phone, they text. Even the one in Guadeloupe who spoke very broken English. I digress. Frequently. The point is that I didn’t “get” texting until now… long after it had become a way of life. This five-year gap has caused me to be late to the party on most things technical. So I am delighted, delighted I tell you to actually witness a new technological fad in the making. Pokemon Go! I’m not playing (our cheap phones don’t have a lot of memory, and I really don’t need a new way to waste time) but I love hearing about something new as it is happening. Makes me feel all current.

8. Politics. Whoa! I’m actually happy to be here during this election year. If not, I would never have believed it. Plus now I can answer the questions on Wait Wait Don’t Tell me.

9. NPR. I am in NPR heaven. Kind of. Maine Public Radio will always be the NPR affiliate of my heart, but Florida does have many of our favorite national programs. I assure you that it’s not our fault that both Garrison Keillor and Michael Feldman both retired shortly after we returned to the US. I also had to break it to EW that Thomas Louis Magliozzi died while we were at sea and that the Car Talk shows we have been enjoying are all repeats.

10. Time marches on. Frankly, it’s dragged a bit here in St. Augustine. We are just now getting used to being back in the states. Transitions are tough. We are determined to make it work here, get the boat and cruising kitty fixed and go on another adventure.  In the meantime, we’ll make music and evidently party with pirates.