What Are You Reading? 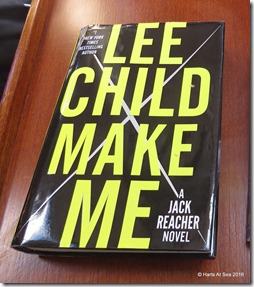 We have purchased few books in the past five years, fewer still in the past two. We’ve relied on book sharing with other cruisers, which tends to be both limiting and surprising. I love reading books on  my Kindle but pretty much abhor paying the full hard-cover price for an e-book. This had been a Facebook discussion among writers a couple of years ago—a discussion I didn’t have the data time for doing much other than putting in my two-cents, so I don’t know if they came to a consensus.

Consequently, while we have never run out of reading material, the majority of our options tend to be genre books enjoyed by other cruisers. That’s OK. We like genre books though we like to supplement them with non-fiction, biographies, and (especially EW) historical non-fiction. Thus, we discovered Lee Child. He became our new Robert Parker. (Back in Maine, with successful careers, we bought the new, hard-cover Spencer for Hire books because we just couldn’t wait for the paperback version.)

Since early Jack Reacher books are frequently on sale or offered at reasonable prices on Amazon, and since “Santa” purchased a couple of the newer books as e-books, we are nearly caught up with the series. A couple of weeks ago, I perused the lending library in the Marina lounge and found the hard-cover of  “Make Me”, which had been published in September of 2015. Score!

I immediately began reading it while the laundry was tumbling in the dryer.  Shortly afterward, a distinguished looking cruiser came into the lounge and also looked over the offered books, picking one to read. He saw what I was reading and asked, “Did you just get that from here?” I tried not to crow as I answered in the affirmative, and offered to make sure he got it next. “You going to be here a few days? Both my husband and I will have to read it before I pass it on.”

He slumped. They were heading south tomorrow, but would return in a month or two. “No worries. I will save it for you.” We exchanged boat cards just before his wife walked into the room. “Oh! Is that the new Jack Reacher?” Her husband and I laughed as he related what had been discussed moments before.

The next morning, I opened an email from them, saying they had put another Jack Reacher novel on the lending shelves. Since EW and I had read that one, we left if for the next person, though I checked when we went ashore to find that it had been snatched up. While we try not to keep many books and few hard-cover ones on board, “Make Me” has a temporary place of honor in the main salon, with the boat card from M/V Erban Renewal taped inside. It will be waiting for you, Julia and Steve. 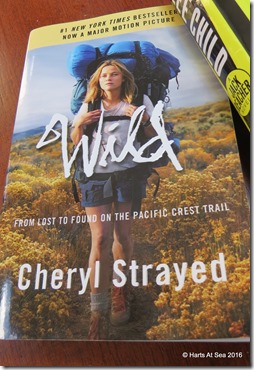 As for my next book, I was delighted to find a paperback copy of “Wild”. Even cruisers who’ve been somewhat out of touch know about this book and the subsequent movie. Or at least, I did. I’ve been reading it slowly,stopping to savor, do something else, and enjoy later. This bitingly honest book resonates with me. I don’t know whether I would have liked Cheryl Strayed when she was in her 20’s, and certainly wouldn’t have approved of many of her choices, but her struggles were not my struggles, and her lessons are not my lessons. I am awed by her decision to walk a huge section of the Pacific Coast Trail in the 90’s --- alone. And I see parallels with some cruisers I’ve met and read about who also survived and succeeded despite a lack of knowledge, insufficient preparation, and incorrect gear.

I wouldn’t recommend anyone to undertake a cruise, a hike, or another feat without more understanding of what is needed. Still, this seems to have been the right choice—and perhaps the saving grace— for Cheryl and most of those sailors I mentioned. I am struck once again by the knowledge that I am not the person who would have set sail in my 20’s, with little or no technology. And I am once again in awe of those who preceded me, showed me the way, and fed my dream.

And perhaps I was wrong about the difference between what Cheryl and I needed to learn. As Cheryl said at the end of the book:

“That it was enough to trust that what I’d done was true. To understand its meaning without yet being able to say precisely what it was…That it was everything. It was my life—like all lives, mysterious and irrevocable and sacred. So very close. so very present, so very belonging to me.”

What are you reading?

I'm with you on not wanting to spend the money on Kindle books. I check out the book exchange at our marina regularly. Besides being free, it also forces me to read books I wouldn't normally and I've often been pleasantly surprised by books I thought I wouldn't like.

So nice that you are writing about books! Let me know if you get any good suggestions....
Cathy

I followed your advice and just bought a nearly new "Make Me" on amazon for $7 with shipping. Read part of it and sounds good.

Did you find a job?

We both finished "Make Me" The ending still haunts me when I'm trying to get to sleep. I hope his other ones are different. Good read but creepy

We are heading back to Maine May 11th.

The thing I like best about Lee Child's earlier books is that one will be reading along, following the plot, when Reacher will make a single observation and suddenly you realize that something completely different has been happening all along.
Two other authors worth pursuing are Randy Wayne White's Doc Ford books, set mostly in and around Sanabel Florida, and Willian Kent Krueger's Cork O'Connor books about a (private) cop / family man in upper Minnesota. There is a big component of Native American culture in these, though I am very annoyed with him for killing off an important character.

PS: How can you be at Bahia Mar in Ft. Lauderdale and not read John d. MacDonald's Travis McGee stories???

This Is It: 2 hemispheres, 2 people, and 1 boat Kindle Edition
by Jackie Parry (Author)
4.7 out of 5 stars 18 customer reviews
See all formats and editions
Kindle
$0.00
Subscribers read for free
$2.99 to buy

This is from Amazon