Home Archives Profile Subscribe
Women Who Cruise
Button, Button, Where is the Button?

As Winter Ebbs in St. Augustine (We Hope) 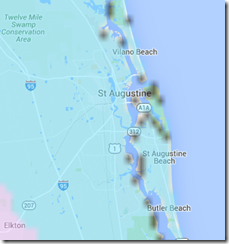 It’s been an interesting winter in St. Augustine. When we arrived before Christmas, we enjoyed 80-degree temperatures. In January, as regular readers know, things went north. EW had to buy blankets, and we both needed more long pants. Getting out of bed in the morning was shocking. Don’t even mention using the head.

Well, it must be mentioned. You know when you have to get  up in the middle of the night and you shuffle to the head, half awake, take care of business and shuffle back to bed to fall immediately asleep? Yeah, well that didn’t happen during our two months of winter. That cold seat would wake the dead if the dead have to use heads. This phenomenon was the topic of discussion. I began to huddle under the warmth of our Jaguars blanket 10 or 15 minutes after EW, who noted my lack of bounding out of bed, by saying one morning, “It’s safe to get up, I’ve warmed the seat up for you.”

One cold night, he suggested bringing the seat into bed with us. NOT going to happen.

We ate more, and accomplished less.

Our few pairs of wool socks were worn more and washed less as we just couldn’t do laundry often enough to keep up.

And then, there was the day. when our early morning trip to shore gave me the opportunity to see something I haven’t seen in a while….frost. In Northeastern Florida, frost happens. Those of you who haven’t read the early years of this blog, may not know that we lived aboard for 8 years prior to cruising. We lived aboard in Maine. Year round. Of course back then, the furnace worked, we had a fluffy duvet, and boots. Here, at least we could congratulate ourselves for having stored many of our fleece jackets, tops, and vests. I may have worn all of mine at one time the coldest days.

I’ve seen many cruisers wearing Keens with socks, and here it’s acceptable. (Unlike when tourists wear socks with sandals during a Maine summer. That is just wrong.)

We have been assured by natives and those who’ve lived here for a while, that Valentine’s Day marks the end of cold weather. I’ll let you know. We’ll be going to an Oyster Roast in the afternoon and hope the two-day heat wave continues and we have another 70-degree day. (Looks like that's a hope not to be realized.) The map at the top of the page represents the average “last frost” according to a local weather source; and the lovely teal color suggests we could have a frost as late as the 21st.

Looks like this year St. Augustine will be above average, as the upcoming week shows lows in the 40’s and daily highs reaching into the 70’s most days—just not on Valentine's Day. 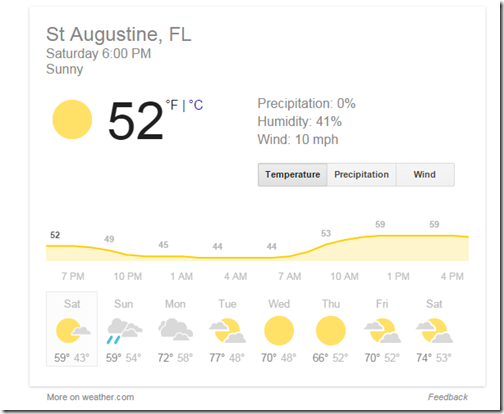 It’s springtime in St. Augustine. We’ve survived our two months of winter, and send condolences to those of you in the Northeast US during your current cold wave. Hope you have plenty of wood, gas, or oil at home. I strongly recommend hot chocolate and cuddling. During the worst days we enjoyed hot chocolate with a “nudge” of rum. Sure beats marshmallows! As for the cuddling, EW and I slept each night entwined, moving practically in unison as we spooned first on one side and then on the other, wrapped in each other’s arms all night long.

By the way, EW has promised me pancakes for Valentine's Day and he found real maple syrup. We have both agreed to accept Vermont syrup, but it was a big discussion in the store.

I had a crazy Barb day the other day... I was in West Marine and the lady there had a hint of Main accent! I swear, I almost called her Barb. I still smile thinking about it..

I sure hope we cross path again and you get to meet my wife!

Mrs. Hart,
I came across your blog after reading "zerotocruising.com" and see you've been docked near St Augustine and was hoping you had some info on CHEAP live-aboard docking inside the St Johns river. I'm familiar with the marina in St Augustine from my part-time boat lease from SailTime but, was hoping you knew of a cost effective and fresher water dock somewhere down the St Johns/ Trout River area. My plan is to sell the house (done) and buy a boat (not done) to live on for the next few years before I retire. My office is in Gainesville but I travel a lot, Orlando, Daytona, and Pensacola, for work so I've been looking for docks on the St Johns, Cedar Key and Crystal River areas. Anyways, if you know of a affordable live-aboard dock on the river please let me know. The "fresher" the water the better as I have few years before retirement. Thanks, Chris