Home Archives Profile Subscribe
Your Moment of Zen
Finally! A Music Night in the U.S.

Wheathah or Not–We Can Handle It

It’s been a cold week in St. Augustine. Not as cold as it was in Maine or Buffalo (or North Tonawanda) but we expected cold when we lived north of the 40th Parallel. This is Florida. This is the state whose residents I mocked in 2010 on our way to the Bahamas. Dear Friend Dora reminded me of my derision during one of our recent phone conversations. “Now, you be careful. You made fun of how they bundled their children when you were in Fort Lauderdale.”

I did. To my defense, it wasn’t nearly as cold in Fort Lauderdale on the occasion of their 2010 Christmas Boat Parade as it was here this past week in St. Augustine, which, by the way, is about 350 miles farther north. As I recall, I had intended to purchase a few bathing costumes and was appalled that the stores had down jackets and no tank-top two-pieces.  “Who would buy these here?” I exclaimed. Often. To EW. At the Christmas Boat Parade we learned that a lot of people purchased cold weather clothing, and many purchased down items, bundling their toddlers nearly like Ralphie’s little brother in “A Christmas Story”.

OK. That may be a bit of an exaggeration. Still, for the past five years I have been continually amazed at the amount of winter clothing offered for sale in the Bahamas, Caribbean, and Panama. You will never make me believe that those who live in St. Thomas over the winter need footed P.J.s. 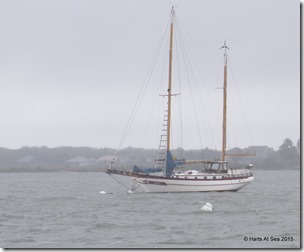 We needed them this week. Nights dipped into the 40’s and the winds blew in the 20’s with gusts to 40. This was serious people. As one woman (who dingied ashore for her shower in footed pajamas) said, “We don’t fight when it’s this cold. We need to keep each other warm at night.” I assure you that EW and I cooperated and were either spooned or entwined all night for three nights.

When the winds were in the teens to twenties, we went ashore for a bit, bundled in fleece and wearing (gasp!) real socks. Wool socks. Wool socks pulled up to our knees. (One older bagger at Publix yesterday wore brogans, knee socks, and shorts. Be still my beating heart.) On the day of the worst wind, the only people who went ashore were those with jobs. The rest of us stayed with our boats and monitored chafe, and made and ate soup, and baked. Yesterday. EW 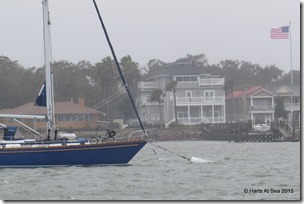 and I were delighted to find much reduced seas and went ashore for much needed showers and a trip on the Port of Call Cruisers’ Bus. Every person on board talked about soup and cookies. These are my kind of people.

During the siege, we were delighted  to hear from La Luna’s former owner, Peter and his wife Barbara who dropped over to St. Augustine to take us out to lunch and to hear about our cruise. Peter has been keeping up on this blog and wanted the “Rest of the Story” and Barbara is a lovely, gracious woman who had thoughtful questions and lovely stories of her own. Nothing will warm a person up like meeting up with friends.  I love that we seem to be living at a “crossroads” of sorts and will continue to see old and new, cruising and land-lubbing friends while we live and work here.

Today, we have a reasonable breeze and sun. I’m back to going barefoot on the boat but our Dear Friend Jaime would be feeling the chill right now.  It’s no longer 64 on the boat, but isn’t much above 70. This is a shock to our systems after Panama and I’m grateful for that gradual re-entry from there to here. I’m also glad that we had fleece hats, jackets, and vests stored under the master bunk.

We are Mainahs. (Well, one is a Mainah transplanted from Buffalo.) In any case, we can handle the cold.

Above, two of our neighbors in 30 knot winds. By the way, we knew the winds hit 30 when the wind generator stopped. There is a safety on it that causes it to cut off at 30. That happened often one day and night. Unfortunately two vessels anchored north of the bridge, where the current and waves can be rougher chaffed their mooring lines, smashed into the Bridge of Lions, and broke their masts. Here's a link.

Keep warm Barb. Tonight in northern Florida it may be only 38 degrees. Cold. Especially on a boat in the wind. Sorry.