Finally! A Music Night in the U.S.

Cruisers with kids make a special effort to anchor in harbors where there are other boats with kids. Some fly a kid-themed burgee and many try to connect on Facebook and plan routes accordingly.

While we are in St. Augustine I may have to get EW a guitar burgee so he can more easily find folks with whom to play music. Every time we’ve met new cruisers and exchanged cards he asks (hopefully and more and more wistfully), “Anyone on your boat play music?”

On Thursday, we took the Port of Call Cruisers Bus to various shops and stores, and talk of the harsh winds, unexpected cold, chafe gear, and dogs took up most of the early conversation. I win the wife award for bringing up music, though setting up a play date hadn’t been my intention. Just before we pulled into the parking lot for the fish market/produce stand a European sailor heading for Cuba and I were chatting about the kinds of things she was taking down to give to the folks she would meet in Cuba. I asked her if she had thought of guitar strings and reeds for woodwinds. She had not, but decided immediately to grab some before they took off. 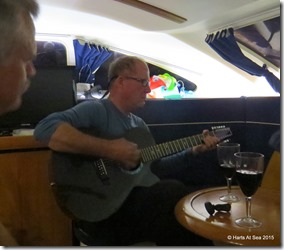 While she and I were in the fish market, EW, Kent, Kirsten, and Rocky gathered for a confab in the parking lot. Turns out Kent and Kirsten also play guitar and sing. Quicker than you can say “Jam Session” one was planned for that evening.

After much texting we decided not to take the dinghies back ashore to the lounge but to stay out in the harbor. Kent graciously invited us to his catamaran—the only vessel of the three big enough for three guitars in the salon. This was never a problem in the Caribbean where three guitars can agreeably if not easily squeeze into any cockpit, but it was much too cold, windy, and drizzly to play on deck last night here in Northeastern Florida. 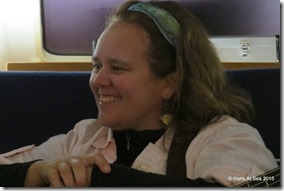 Turns out Kent is a professional musician/architect with a trained voice and excellent guitar skills. Kirsten also has a lovely singing voice and is about at the same level on guitar as EW was when we first set out five years ago. EW was EW at his finest. On tune, some good guitar licks, gravely voice, and fierce rock star face. Rocky and I were the band-aids, pouring wine, replacing empty cans of beer with full ones, and offering Rocky’s outstanding home-made guacamole.

They played for five hours. 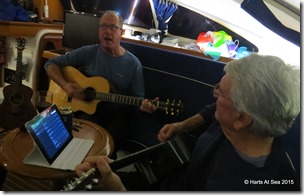 It was a great night during which both EW and I thought fondly of all the wonderful music nights we shared with so many musician friends and band-aids in the Caribbean, Azores, and Canaries.

I think that guitar burgee may be a great idea.

NOTE, the black twelve-string is made by RainSong and is carbon fiber. Kent says he can use it as a paddle. EW says that Fatty Goodlander has a similar six-string model. I say we don’t have room for a second guitar. 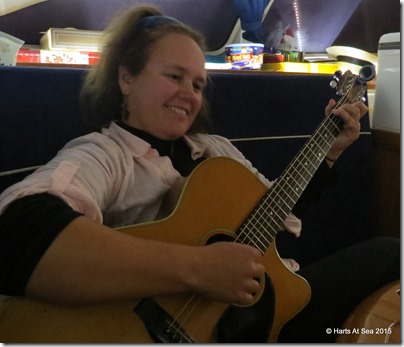