Timeline of Our Trek North

Yes, I know that the blog got messed up/closed down/ran only headlines/whatever. Now that we have some time in Miami and I can get online at the wonderful branch library at Key Biscayne, I am working to get things up to date, to  edit and repost the lost blogs, and to add photos. So for the next little while, these posts will consist of two parts: (1.) What’s happening in Key West, and (2.) A review of the trip starting from the beginning.

I. At This Moment in Time

We are on a mooring in ….. (see above). Looks like we’re back in Maine! This photo was taken moments after we picked up our mooring. in St. Augustine.

We arrived in time for the 4:30 Bridge of Lions opening and were on our mooring before 5:00 PM after sailing some and motoring most of the way from Miami. We had hand steered all the way, doing “120’s” instead of “90’s”, except for the last day. On Wednesday the fog crept in before sunrise and we were both on watch at helm or radar until 2:00, when it finally lifted. Unfortunately, unbeknown to us, that fog simply moved to the entrance of St. Augustine. Yep, those of you you have entered that “interesting” channel in a rip tide heading out to sea…we did it without being able to see the markers until we were right on them.

No worries. I was taught to sail in Maine. EW has driven boats in the rivers of Maine and New Hampshire. We got this.

As for the rest of the timeline, we arrived in Biscayne Bay on December 3, anchoring outside of No Name Harbor in Biscayne Bay. As of December 6, Miami had broken all prior records for rainfall in December. They are not having a good year. The harbor is well sheltered from the Nasty Northerlies, and here we sat. We have done boat projects, enjoyed wonderfully welcome company, and walked to town a number of times..

It may be fate that we ended up back there—and it certainly brought us full circle. In December of 2010 we spent time here waiting to cross the Gulf Stream to the capital “B” Bimini. That year was also a difficult year to cross and the one-day window fell on Christmas Day. We took it. On December 3rd, nearly five years later, we motored slowly in the somewhat straighter shallow channel, past the old fishing houses on stilts, back to No Name Harbor.

Here’s a photo of what was going on in the Gulf Stream. While we could have motor north in north winds, it wouldn’t be fun, and there would be squalls. We stayed put.

II. The Update of the Recent Past

For this first Update post, let’s look at the timeline to this point.

October 17—One day prior to our fifth anniversary at sea, we announced that we would return to the states, but only as far north as Florida, where I would go back to work and EW would work on the boat. We were (and still are) clear, that once I retire we will head back out to sea. (Being much younger than EW I am not ready for retirement.)

November 2—Chris Parker gave us a “Go Now” directive for a good but short window to Key West. This was unexpected as salty Panama sailors had said that folks usually don’t go until after the 10th as hurricanes can and do form in the Western Caribbean in November.

November 3—We checked out of Panama and headed north, one day later than Chris Parker’s suggested departure.

November 6—EW celebrates his birthday at sea. (I owe him a carrot cake.)

November 11—I jinx our progress by mentioning that we decided to pass by Isla Mujeres. (Some of you know how that worked out.

November 13—We anchor in Isla Mujeres, having decided with Chris Parker that we would not safely get to either Key West or the Dry Tortugas prior to the Nasty Northerlies. (If  we had been able to leave on the 2nd, we’d have made it.)

November 17—We leave Isla Mujeres late in the afternoon, heading for Key West (or at least the Dry Tortugas) before the next round of Nasty Northerlies. This time we have a Buddy Boat, the Party of Five, though with only four on board. (Check out this video by Quincey http://www.svpartyoffive.com/2015/12/07/quincys-video/)

November 22—We anchor off Flemming Key at Key West.

December 1—Left Key West for Miami. (Which would be as far as we could get before the next Nasty Northerlies.

December 3—After an “interesting” passage, arrived and anchored outside of No Name Harbor in Biscayne Bay, Miami. We arrived at the entrance of the channel after midnight and anchored on the East side of Key Biscayne until daylight. This is not an approved anchorage but was a safe stop for a few hours and I did keep watch. (Sort of.) 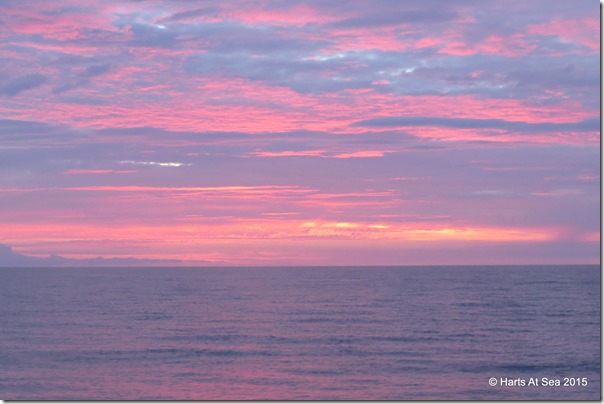 We continued to remain upbeat and mostly cheerful. We were thrilled to find we were able to connect with wonderful cruising Friends Bob and Vicki from Foxsea. More stories from our visits with them later.

Finally, an interesting note (to me, anyway) especially for Steve and Alice on Ocean Star (somewhere in the Pacific). Many of us had trouble making bread while in the San Blas. Dani on Sundowner did not. She made perfect sourdough bread with a number of different starters. If I am going to care for another live thing on board it will have fur and give puppy kisses, so no sourdough for us. Unfortunately, my no-fail easy artesian bread from Mike, formerly on Happy Times did not do well in the San Blas.

My pizza dough did fine, so we knew the yeast was good. Must have been the heat. I made Mike’s bread this week and it performed perfectly and tastes great. 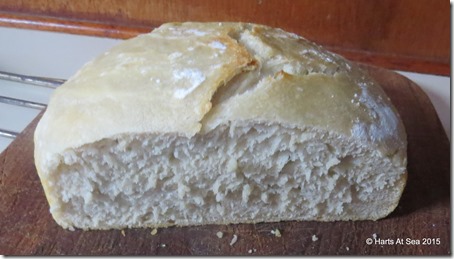 So glad to see you guys got there safe. Loads of nasty weather.

So happy that you are safely back after five years of sailing adventures! Will you have a land based mailbox in Miami? more accessibility for e-mails and texts?