Flipper and Dogs and Stuff 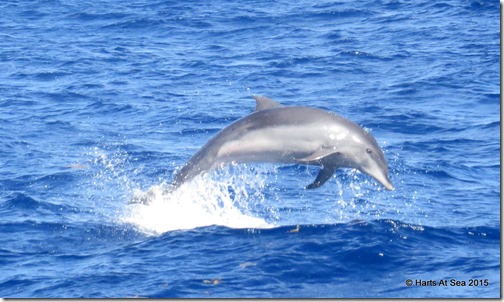 We liked both Key West and Key Biscayne (and we are thrilled with St. Augustine). I’ve especially enjoyed the excellent “fur fix” opportunities.  So far I’ve met a recently rescued wire haired fox terrier, a Labradoodle,  a stunning Portuguese water dog, and a Golden who stopped by to visit as I sat in the dinghy. We miss having a dog but choose not to sail with one. I think I may feel that void more now that we are here in the states. This post goes out with special hugs to Mimi, Bondo, Scrumpy, Chewy, Sissy, and my sweet Hunter—boat and island dogs of my heart.

As for the stuff, we (mostly I) have been working on a huge tidying project on the boat. You’ll hear a lot more about it in the future. As you may imagine, with a huge list of things to fix, EW hasn’t totally bought into the tidying moments. However, I am sneaky and when I emptied a very accessible cupboard, I offered it to EW for tools and parts storage, emphasizing that he didn’t have to take advantage of it right away. He, however, saw the value in that space and immediately cleaned out two other cupboards, getting rid of stuff between one cabinet and the next.

The result is we had six kitchen garbage bags of stuff seeking a dumpster and there were no dumpsters in No Name Harbor. No worries, when we filled up the diesel and water tanks at Crandon Marina in Biscayne Bay, Ernesto, Superior Dock Person, told us just to space them out in the various bins on the fuel dock. “They don’t have a system here, so don’t worry about it” We heart Ernesto.

II. Heading North with Flipper (Actually a lot of Flippers) 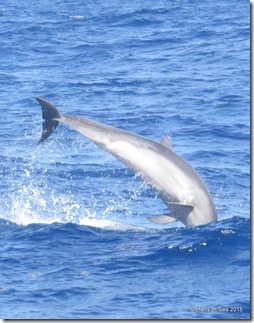 I made a bunch of new friends the last hour of my afternoon watch  on November 8th. I was sleepy but pretending to be alert, checking the horizon for traffic, when we were approached by a fleet (pod/troop/bevy) of dolphins. Now this isn't the first time we've had dolphins cavort near La Luna. It's happened before, but never by such a large group and never for nearly an hour. 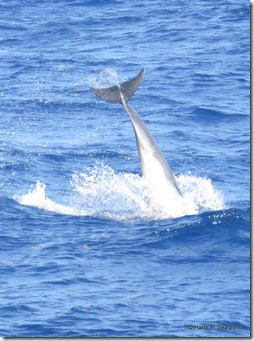 These appeared to be bottle nosed dolphins--just like Flipper---and they spent the hour playing and performing for me. I was a most appreciative audience. At first I stayed in the cockpit and provided verbal ovations: "Hello beautiful." "Aren't you the best?" followed by many oohs and ahs and soft hand claps of pleasure. It seemed as though many of them swam near the cockpit in response to my appreciation. I called to EW and he joined me for some minutes before going below to read the engine manual. (Don't ask.) 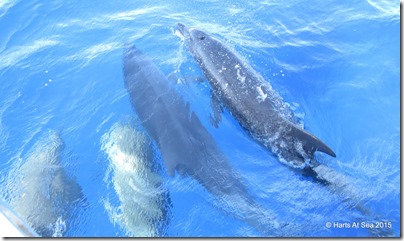 We’ve had groups of dolphins play in our wake in the Azores and Trinidad, but again, not for as long or as exuberantly as this group in the Northwest Caribbean. EW handed me the camera and I again stayed in the cockpit, taking photos and exclaiming. Finally, I ducked below to put on the life jacket and harness and made my way to the bow. There, I was the sole audience for a spectacular show. They leapt fully out of the water; three of them slapped their tails in turn; one stood on his tail to spy me; one did a flip; and all of them chased each other around the boat, passing back and forth in front of La Luna's wake. I snapped photos and wondered at one point whether they were enjoying the sounds of the camera, the little tone and snick-snick-snick that meant I was in sport mode, trying to take many photos to get one good shot. Later, I put the camera aside and simply enjoyed their acrobatics and joy.

I got splashed and laughed. I continued to talk with them. It was my best dolphin experience ever.

Both EW and I feel that seeing dolphins play near your boat is a good omen. It certainly made my day.

As did our progress. As of 0900 on Sunday morning (Panama Time) we were located at 17 degrees 20.42 minutes North, and 82 degrees 12.90 minutes West. We were sailing between 4-5 knots downwind in an East breeze. We had about 400 miles left to the arbitrary mark made off Isla Mujeres, and over 200 miles beyond that to Key West. However, we knew that this East breeze would be Northeast in the Gulf of Mexico and were prepared to tack, perhaps doubling that 200 miles. On this blissful dolphin day, we thought we’d be able to sail al the way to Key West, wait a few days, and make one long passage up to Amelia Island for Thanksgiving.

We were so naïve. 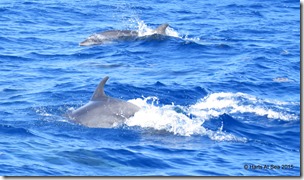 Hey are dolphins like  dogs in that if they swim upside down, showing their white bellies, does it mean they trust you? I did not provide belly rubs, but I so wanted to. The harness (and I) remained tethered to the deck. 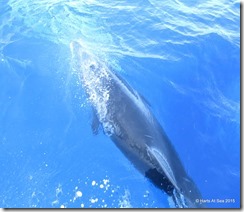 The original title of this post was “Dolphins and Dinner” For the dinner portion of this message, let me tell you about the excellent lupper we enjoyed on the 8th. (For those uninitiated, a “Lupper” is a meal offered in mid-afternoon. I am a proponent of luppers, particularly at sea as they require me to prepare only one meal in addition to breakfast.)  For EW's birthday, I’d  cooked the smoked pork chops available in Panama and served them with roasted veggies including chunks of potato, onions, peppers, and eggplant. On Dolphin Day I smashed the leftover veggies and dumped them into hot olive oil in my small iron skillet, and fried that mess until the bottom was a bit crunchy. I whisked four eggs, added shredded cheddar cheese, basil, and mustard and poured that over the vegetable crust. Then I popped it into the oven for 20 minutes.

We have a winner.