Home Archives Profile Subscribe
Timeline of Our Trek North
Two Different Passages: One North and One Back to the “Real World”

New and Old Friends at Sea

I. Technology  in Key Biscayne

My smartish phone broke in Panama and would not read a SIM card. I spent a frustrating five hours walking all over Key West before a charming man in a small shop helped me determine that it was, indeed, toast. Technology has advanced a whole lot in 5 years (can you say “Android”) and I am not ready to spend $600 for a phone. Still we need to communicate, so yesterday EW and I walked to an AT&T affiliate store and purchased a SIM card for the old, not-so-smart phone I had in St. Thomas. We still don’t have data, but we can be contacted and can contact others.

Though it wasn't easy in Key Biscayne when we communicated via Sailmail with dear cruising friends Bob and Vicki from Fox Sea, we did get together. We had met them in April of 2011 in Antigua and instantly became friends (that they are excellent and eager Euchre players helped cement the friendship). In addition they are outstanding travelers who have had incredible adventures since we parted ways. Of course we have stayed in touch and they emailed us to say they were currently in Miami, “With a car if you need to get anywhere. We would love to see you.” We didn’t need the car, but we did need a friend fix and invited them to the boat for an early dinner, story sharing, and (of course) a few rounds of Euchre.

The Harts won in the friend department. Have  I mentioned that we had rainy weather in Key Biscayne? Well that Monday was miserable, with driving rain on their appointed hour of arrival. EW got drenched going in to get them. I got drenched helping EW with the lines, and Bob and Vicki got drenched getting out to the boat. Towels and a change of clothing all around, plus coffee with a shot of whiskey, and we were good to go. It was not a quiet night. Bob and Vicki also had boat problems in Panama and also have stories about getting parts and making things work. They spent time in Guatemala and Mexico, and left their boat for a few months to crew on a boat going from Australia to Africa. Along the way they took tours to visit with native populations, watch birds, and seek out snakes at night in South Africa. (Why?) We sold them on the Azores and commiserated with them about Panama. It was so incredibly wonderful to see them that I can’t even tell you. There aren’t many people you can invite to your boat in a driving rain, especially when they must take a dinghy ride to get here. However, I know that Bob and Vicki aren’t the only ones who would visit us in those conditions. We are very fortunate to have such wonderful friends.

II. Under the Sea in an Octopus’s Garden With You 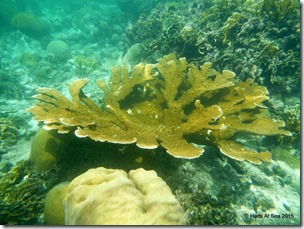 Flash back to November 1-3. The day before we left the San Blas, we played with new friends, and we are thankful that EW got to enjoy one last and outstanding snorkel adventure before heading back to the states. This was the first time he’d been snorkeling since our time in the San Blas in July. (Having shingles will do that.) Back in July, Jaime and Keith had pointed out a reef they called "The Japanese Garden". It's a dinghy ride (though a longer one than normal) from "The Pool" and we invited Dani and Tate from Sundowner to join us as their dinghy is powered by "Ole Crappy", a 3.5 little chugger. 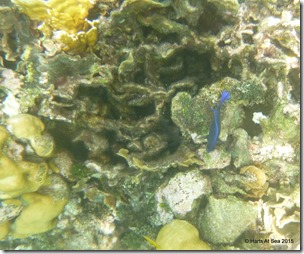 Dani and Tate invited folks from other boats,  whom they had met in Provedencia. Altogether we were three dinghies, and 8 people, from five boats. It's how we roll here in the San Blas. Everyone raved about "The Japanese Garden", which offers scores of beautiful and interesting fish, spotted lobster, at least one (late and now eaten) barracuda, and incredible coral of all different kinds. 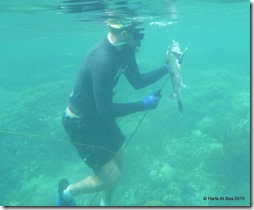 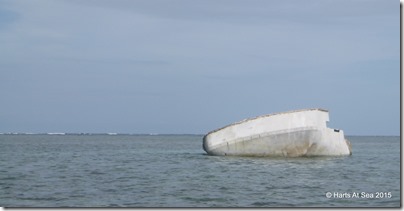 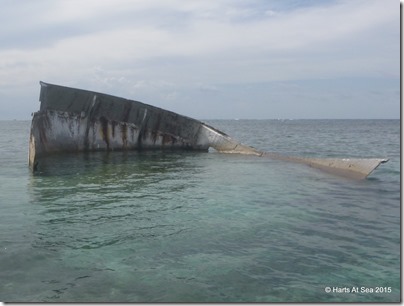 Afterward, Tate and Steve from "Tango" went off for further fishing while the other two dinghies attempted to motor around back of the islands for the "scenic" route. One of those dinghies motored all the way back. The other captain took the path less traveled had to rely on two blonds to row through the shallows.

Dani and I are good sports.

That night, Dani and Tate hosted us for dinner of marinated and pan fried dog snapper, mmmmm. They both love to cook, and we love cruising with folks who love to cook. Dani and I planned a joint birthday gathering for EW (the 6th) and Tate (the 3rd)to be held on Monday night. We were going to invite 6 other boats and ask them to bring the standard munchie to share and your own drinks for a night of (crowded) revelry on deck. I was going to make carrot cake.

By now you know that on Monday morning, I tuned in for our first time listening to Chris Parker as a "Sponsored Vessel". We paid for the month of November and had fingers crossed that we would get a window by the 10th. I had plans for those 9 days; plans that included at least two San Blas adventures, much swimming and snorkeling, and many short but important boat projects.

After his normal broadcast, I checked in to introduce myself and to  remind him of our intentions. He came back with, "Can you leave today or tomorrow?"  EW was in the salon with me and at first we both looked at each other and shook our heads, thinking, "No way!" But Chris continued on with the weather, the possibilities, and that leaving even on Wednesday may be OK, but Monday or Tuesday would be better. After that, who knew when we'd next get such favorable conditions? 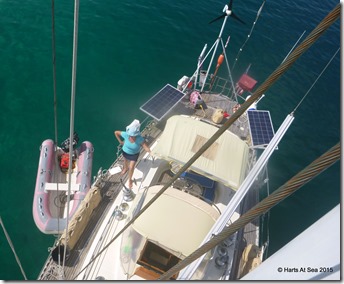 So we rallied. Big time. Canceled the party on La Luna, got on the radio to ask anyone in the East Lemons to call us if a veggie boat showed up there. (They tend to stick to the more western anchorages and not as many go to the Holandes this time of year.) EW went up the mast for one project, and then we said our good-byes, and hauled anchor for the East Lemons, arriving at 1430. While we were getting underway, Laura from Gilana called to let us know that the "staples" boat was in their anchorage, saying, "These guys don't often have a lot of fruits and veggies, when they come by I'll call you."

We got lucky, as that boat had plenty of good things. Laura got into the launcha to browse the items while her husband and captain, Mike got on the radio to me. The conversation went like this: Mike stated, "Potatoes." I said "Six, please." Mike said, "Rice." I said "Zero." And so on, down through my want list. They bought and paid for the stuff, put the chicken and broccoli in their fridge, and waited for me to arrive. Perfect. The generosity of cruisers never ceases to amaze me. In addition, Mike advised me about getting rid of that last bag of garbage,  and they agreed to hand off an item that belonged to another boat who was not in the anchorage. Mike and Laura took a bunch of monkeys off my back and enabled us to get underway.

At 0714 on November 3 we left East Lemons for Porvinir to check out of Panama.. We arrived and anchored just at 0830, in time for Chris Parker's broadcast and my second talk with him,  "Go for it." We expect to motor the first day or day and a half, have up to 30 knot gusts through the "convergence zone" and smooth sailing to just off Isla Mujeres. We hoped to get to the Yucatan in 8-12 days, and crossed our fingers that the weather gods would still love us at the Yucatan, so we could turn right and head north of Cuba to the east coast of Florida and up to Amelia Island for Thanksgiving with landlubber but great boat guests and life friends Stu and Cathy.

As you know, that last bit didn’t happen, but, say it with me….”It’s all part of the Adventure.” 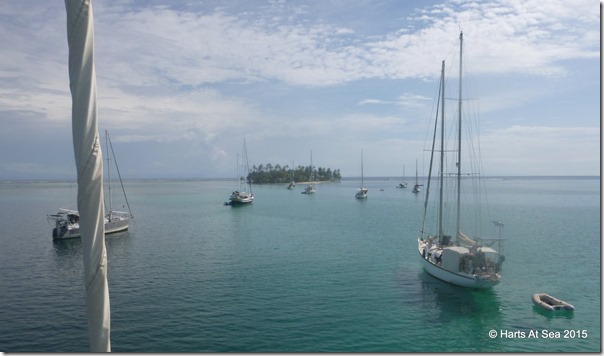 Oh, while we totally understand why Jaime calls this the “Japanese Garden”, both EW and I found that we had an ear worm that evening. We were both humming, “I’d like to be. Under the Sea. In an Octopus’s garden with you.”