We struggle when we talk about the San Blas. It is an exquisitely beautiful area and we are indeed fortunate to have been able to visit these islands. We did not realize that relatively few boats spend time here in the summer. Grenada is a huge hurricane season draw for cruising sailors, but fewer than 30 boats spend a lot of time in the San Blas from June through November. It’s hot,  with a challenging number of severe lightening storms.

This area is incredibly beautiful.The photo below was taken from the stern of our boat. I could and did swim from La Luna around this first reef and snorkeled, viewing eagle rays, the ever tasty ocean trigger fish, and the more beautiful queen trigger fish. Before they set sail to travel East, Keith and Jaime led an expedition to the reef you can see breaking in the background. There are caves, huge coral, sharks,and millions of fish.It was the most breathtaking snorkeling I’ve experienced. 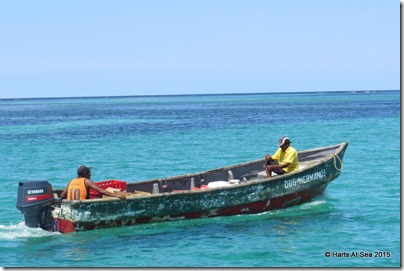 This is how we shop for groceries. Dos Hermanos or another “veggie” boat will visit the anchorages nearest Carti. Many cruisers spend most of their time in one of two island groups just so they can be served by the veggie boats whose visits are infrequent during the summer season. In addition to fruits and veggies we can purchase wine, beer, whole chickens, and a small array of rotating items. Note, everything that is sold by the pound is weighed in the same scale. Can you say chicken blood on the broccoli? Yep. Cleaning is vital.

Here’s a storm building from the east and a bit north. The ones we really have to watch out for come from the south, with no warning. Folks have clocked 30-50 to even 70 knot gusts during those “chokosanas”. (Spelling mine and probably wrong.) We’ve been fortunate to be around only for the 30 knot gusts, but it’s important to anchor where you have 360 degrees of swing. 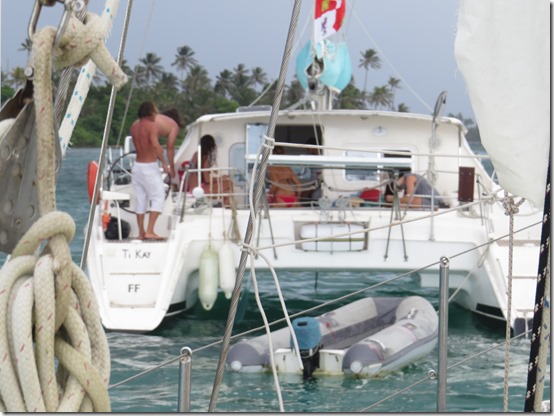 This is not safe anchoring and was taken from amidships on La Luna as a storm brewed up from the southwest. We were not happy. This is a local charter boat and (forgive me) they anchor worse than the normal French cruiser. This guy was doubly bad as the boat hails from Guadeloupe. (It’s not prejudiced if it’s true. If EW and I get invited to a Halloween party next year, we will wear stripped tees, white capris and manpris, and carry dingy anchors. When folks ask what we are supposed to be we will drop our anchor on their toes and say, “Bonne nuit! We are French cruisers!”) 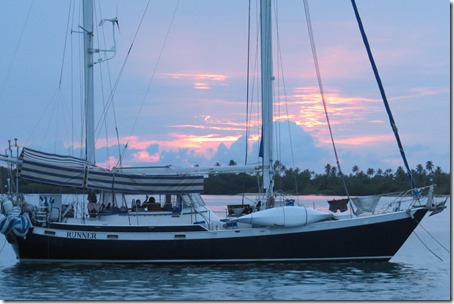 This is S/V Runner, at home on anchor in The Swimming Pool. Reg and Debbie also provided EW with excellent medicine for shingles, and had us over for a wonderful dinner once EW was social (defined as getting dressed). They’ve lived in the San Blas as retired residents for 20 years, and willingly share their knowledge. Deb is an avid snorkeler, obtaining small fish for her three on-board tanks, and catching smaller fish for food. As you can imagine, with the Panama Canal close by, VHF Channel 16 is pretty busy with important stuff. Years ago, the authorities asked the cruisers to pick a channel for hailing and emergencies and they picked 72, which we generally keep on all the time. During our first month in the San Blas in addition to the normal boat-to-boat calls, I would often hear a vibrant voice saying, “Ten Minutes!” and nothing else.

It bugged me. I just wanted to know what those people were doing in ten minutes. While we were in The Pool I asked Deb if I could join her one day when she snorkeled. She agreed and told me that we’d go around 10:30 and she would give me some warning. At 10:25 I heard that vibrant voice say “Ten Minutes!” and was delighted to learn I was now part of the club. No initiation was necessary. 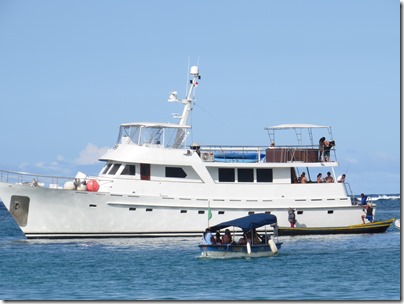 During the summer, a large number of power boats transit the canal from the Pacific side, leaving their boats at various marinas in the Western Caribbean and bringing friends and family out to the San Blas for the weekend. They fish, party on the beach, and party on the boats. They pretty much ignore us, and refuse to stick to the Channel 72 protocol, using it to have lengthy conversations. We sincerely hope they have a wonderful weekend, each and every time, and can’t wait for them to leave on Sunday night. We did not laugh when this boat ran aground setting his anchor close to Barbeque Beach.  We don’t wish that on anyone, but we also knew he was on sand and grass and certainly more embarrassed than damaged. He did not go on the radio to ask for help getting off. 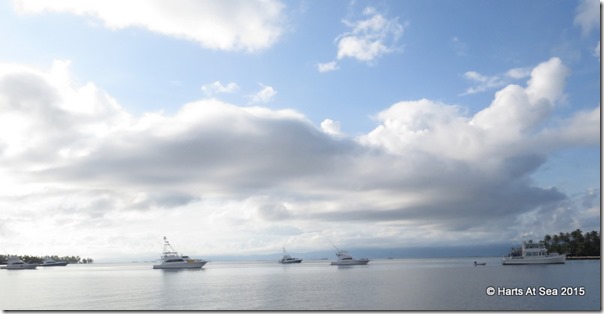 The power boats anchor near us only for a few hours, then head out about a 1/2 mile to another spot for the night. Early Sunday morning, we motored slowly through the fleet on our way to Linton. 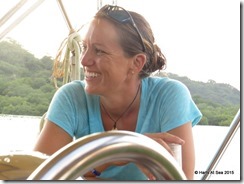 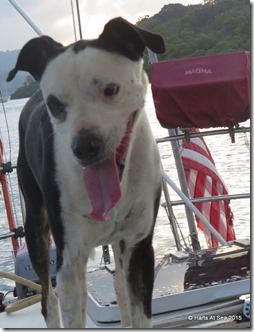 Bonus! S/V Joanna is on the dock in Linton! Nico and Maria came out for a visit, dog cookie, and glass of wine (respectively) the other night.

We hope to see Cathy later this week.