Panama: Where East is West and Nothing is Near and There's No Such Thing as a Quick Trip to Colon

I have an excellent sense of direction, except on islands—and sometimes in Panama. When the full moon rose one night in Linton Bay I was nonplussed for a moment, thinking it was rising from the west. On the Caribbean side, Panama has a snaking, curving coast, so the mountains on the mainland are south of us. On the chart, we are anchored west of Isla Grande under that big messy red dot. Our cruising ground in the Guna Yala are inside the messy red circle.

This anchorage/marina is the shortest distance from the Guna Yala where one may take a bus or taxi to Colon or Panama City. That doesn’t mean it’s easy. It means it’s possible. A bit closer to Colon is the town of Portabelo, where one can anchor and go ashore and catch the bus. There are pluses and minuses for anchoring in Portabelo: On the plus side, it’s on the regular bus route and more buses go between Colon, Sabinitas, and Portobelo than go to the end of the line. We anchored at Linton Bay Marina, which is close to the end of the bus line and offers fewer buses. Also on the plus side for Portabelo, there area a couple of hardware stores, a few small groceries, an excellent Panamanian bakery, a good fruit and vegetable vendor, and Captain Jack’s, the cruisers’ hangout. On the minus side, we have been told not to leave our dinghy ashore overnight, and Portobelo, surrounded by mountains, makes its own weather. It may rain nearly every day in Panama during the rainy season, but it always rains in Portobelo. Also, bad thunderstorms occur more frequently there than they do where we opted to anchor. I will put up with quite a bit of inconvenience to avoid severe lightning.

This cruising life is a trade off. 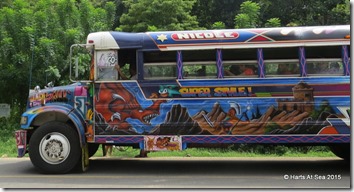 The big trade off is that end of the bus line thing. Affectionately known as “chicken buses” these old, retired, US school buses are often pimped out with graphics and giant versions of those bicycle handle bar streamers we all used to have in my youth. In addition, they have generally taken out the last two seats to allow for large backpacks, bicycles, and groceries, and they have installed pipes along the ceiling so folks standing have something to hold. To say folks are squeezed in would be an understatement. “How tightly are passengers squeezed together?” you might ask. On his last run back from Colon, EW was squished into the window by a rather large woman on the aisle, who was being pressed herself by someone standing in the aisle. At the end of the trip,  EW’s elbow had been rubbed raw on the window molding. Trips to Colon will take about two hours and are never comfortable—though that’s our only injury thus far.

Still, for weeks, one or the other of us would plan a “quick trip” to Colon. One in which we’d scoot in to pick up something that had been ordered or repaired, with the intention of getting on—if not the next bus back, the one after that. It never happens. And—since the buses to “Laguaria”—the end of the line don’t run during the afternoon, if one misses the last mid-day bus, one waits until 3:30 to begin the trek. If one is burdened with groceries, a case of beer, or two alternators, it is best to go to the dingy bus station so that said heavy things can be easily loaded into the back of the bus, and so that you are sure to get a seat.

We usually try to catch the 6:10 bus at the marina going toward the end of the line so that we have seats when the school kids get on at that end. On my “quick trip” I opted to leave at 7:10, and shared a seat with a cruiser from Columbia, who speaks some English. As we entered the last stop before turning back towards Colon, the bus was waved over by the police, who boarded and walked down the aisles. I’m not sure what they expected to achieve, but gathered that two German tourists had been robbed and the police were trying to find the culprits. We sat on the hot bus for 45 minutes, after which the driver returned and we resumed our regularly scheduled program.

It took me well over two hours to get to Colon that day, but my task was quick and easy and I opted to catch the return bus near the Quarto Altos Mall. Every seat was taken except for one full, two-person seat which had two small bags of items sitting all alone. One woman conveyed that I could take it, but I understood she had been holding the seat for someone. I left the groceries in the seat until a gentleman sat next to me and I had to take them up. This kind of ticked me off. This is the only time I’ve been on the bus without having to hold groceries or boat parts or an alternator and there I was, holding someone else’s stuff.

People got on. People got off.  The man next to me got off and someone else got on. In the meantime, I’d use my phone to translate, “These are not my things,” which brought smiles to three ladies in my area, but no relief. Finally, one young woman with a small boy in her arms indicated I should do…something. At first I thought those were her packages, but no, the three ladies had been watching for a moment to get me into another seat, and she wanted me to move next to her quickly “rapidamente” before the school kids got on at the next stop. The bags  belonged to the first lady, who was saving a seat for her two school-age sons. Evidently this is Panama’s version of picking up the kids from school.

In addition, the three ladies had paid attention to me when I mentioned my destination as Puerto Lindo, and my young seat mate conveyed that this bus did not go through to the end, but stopped in Portobelo and turned around. “No problemo.” I said, followed by “Gracias.” I hopped off in Portobelo, helping my seat mate with her own packages, while she carried her baby down the cramped isles. There, I waited for a bus to the end of the line. I had left for my quick trip at 7:00 AM. I arrived in Colon after 9:30 and completed my one mission there in just 20 minutes. Still, I didn’t get back to the marina until 4:00 PM

Proving once again, that there is no such thing as a quick trip to Colon.