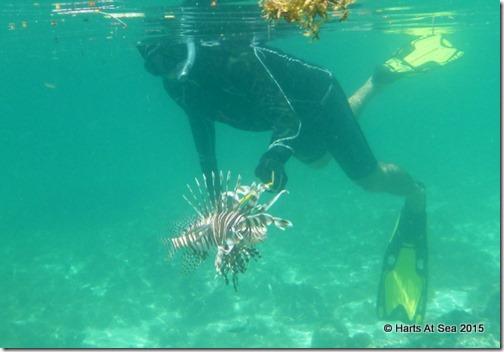 I know I’m loud. Sometimes I don’t know how I am loud, but I am willing to learn and I can be quiet if I need to.

Before we knew EW had shingles he thought it was a 1) New bunch of bug bites, or 2) Sting from a jelly fish so we went snorkeling in the “caves” with Keith, Jaime, and Tate and Dani. This is a section of reef between the flats and the Caribbean Sea with caves, an underwater tunnel, and passages between huge mounds of coral.

I was meandering toward Keith when he gave me the “come here” motion and I meandered faster to see what he wanted to show me. It turned out that they had startled a largish nurse shark on the other side of the coral, and it had headed around to my direction so Keith wanted me to move out of the path of the shark.. No problem. When I meandered faster, I “chugged”, and the shark turned tail. “Chugged” is Keith’s term. Turns out I’m a loud snorkeler. When I kick to move forward, my flippers always clear the water and I make a heck of a lot of noise that I can’t hear because my ears are underwater. The fish (and that shark) can hear me coming from a mile away. That which may be good when one wants a shark to turn, is not good when one wants to get up close and personal with a tang, parrotfish, or turtle.

I can learn, however, and used my new knowledge to keep my feet still and let my arms do all the work—underwater, in long slow motions. Later in the week, when Keith invited me to snorkel a new-to-me reef while he hunted two lionfish, I promised “No chugging.”

Later, I told Jaime that this was not the first time “chug” had been used to describe me.

In addition to being loud, I tend to walk fast. In high school I remember some boys standing off to the side of the hall and saying, “Here comes the train! Chugga. Chugga, Chugga, Whoo Hoo!”

So basically, after blankety-blank number of years, not much has changed.

Well, except now I’m chugging in warm ocean water, and stopping to view the fish, anemones, rays, and turtles.

To keep things honest, we’ve seen everything except a turtle, although they live and frolic in the Guna Yala, they are shy.  They probably heard me chugging. 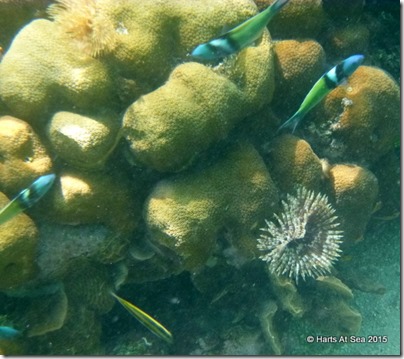