I haven’t done a “Spam” post in a while. It’s a great way to provide a bunch of tidbits about our current location. “Spam” posts were started in The Bahamas when I took a photo of three shelves of different varieties of Spam in the local grocery store. The world doesn’t need that much Spam, and it may not need another one of my mashed together bits of into, but that’s what you get.

San Blas or Guna Yala? The Spanish named these islands the San Blas, more recently, the people who own these islands, the Guna, have let it be known that they prefer the region be known as Guna Yala. If you read about this region in the past, you know them as Kuna. There is no “K” in their alphabet, so they prefer “Guna”. Some cruisers still pronounce it Kuna. The sound is in the language, not the letter. You confused? In the future I will use the term Guna Yala more often than San Blas.

The Topography. These are not the tall volcanic islands of the Eastern Caribbean (or of the Azores). These islands have more in common with photographs I’ve seen of the Pacific, and are small sand islands with coconut palms. They are surrounded by a whole lot of reefs, so navigating is tricky, but the anchorages are lovely, the swimming and snorkeling is great, and we are sailing every few days. It does not suck.

Boat Life. We have friends here as Jaime and Keith from S/V Kookaburra are enjoying their second year in the region. Our week with them was chock full of sailing, anchoring in new spots, learning to navigate some of the reefs and to respect all of them,, meeting fellow cruisers, and playing music. (Jaime found at least three other boaters who play and jam. EW is happy. They’ve gone back to the States for a few weeks and—while we miss them, we are doing boat projects, still cleaning up from the trip, and getting use to sailing in an area much more remote than we’ve ever experienced. Good thing EW and I like each other.

Groceries. Not many. In 150 square miles of the most visited islands, there is one island known for having a number of stores that stock for cruisers. (Actually two islands joined by a foot-bridge.) (And I use the term “stock for cruisers” loosely. Very loosely) Since this is not the busy season and there are fewer than 50 cruising boats in the region, the shops are not stocking many items. A few of the Guna with power boats do still bring veggies, fruits, and groceries to those anchored away from Nargana, the island with stores. We did learn this week that there is a store on the only island that has fresh water available and I had much better luck getting provisions there. Between the two, we rely on the veggie boats, and the Guna who catch and sell fish, lobster, and crab. The crab is delicious.’

Laundry. Remember my old post from back in the day when I was discovering washing laundry in a bucket using ammonia? That was fine as a novelty, but over the past 5 years,  I’ve generally hit the laundry every other week. Here, there is no laundry facility and I will be washing in the bucket through November. We arrived after 12 interesting days with a huge pile of salt water laden clothes, and it took over a week to get them all washed and dried. Now I’m catching up on regular laundry, and have learned new things about bucket laundry.

The People. The Kuna are interesting. They are a closed society in that marriage outside of the society is forbidden. They are an autonomous society in that, while they are residents of Panama, the chiefs set the rules for this region, and work to ensure that the people don’t lose their old ways. Still, each populated island has a Panamanian school which the children attend wearing uniforms much like those in the Eastern Caribbean. Also, many of the adult population in the towns no longer wear traditional dress. And practically everyone has a cell phone.

Many of them still make as sell molas, squares of fabric with designs created largely by cutting away layers of fabric cloth to reveal certain colors to create images or geometric designs. There are traditional molas and tourist molas. One of the master mola makers showed us a design he does of a Christmas tree; this is not a traditional mola. We’ve opted for two so far, made by two different master mola makers; one depicts a sea turtle and the other a ray. 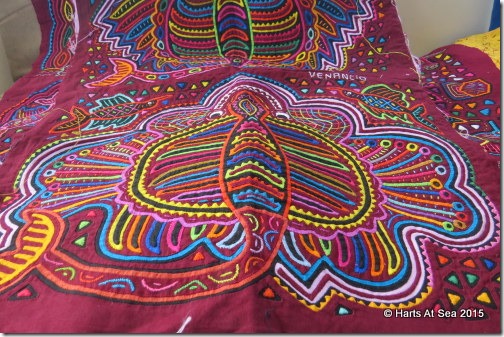 Most people are friendly, helpful, and honest. and while every day folks stop by to see if we want to purchase molas, crab, lobster, or groceries, a simply “No Gracias” will send them on their way. At this anchorage, we had visitors of a different sort.  We had spent Wednesday going into one of the few settled islands to get water (That’s another long story, already written to send to a magazine.) We had come out to an anchorage near the island of Sabudupored, that Jaime and Keith just call “Workman” because it’s usually empty and they can get a lot of work done. The theory is that if there aren’t a lot of boats, there are fewer Guna stopping by to sell stuff. Not so much.

Wednesday had been a long (though great) day and we just wanted to settle back in the cockpit and enjoy a gin and tonic with fresh limes purchased on the dock. But just as I had pulled out the gin,  three drunk boaters came by in a nice newish fiberglass local boat. They wanted gas and beer and EW sold them some. One wanted photos with us and showed no interest in going; he owned the new boat and he was the happy, insistent, and friendly guy, out for a day on the water and indulging in too many beers. That guy. He lives everywhere. He said he was a “professional” electrician and worked at the power plant and he’s very proud to have a job like that, which obviously provides a good income. They drank the three beers and wanted more, but EW did manage to get them to go home. The whole encounter only lasted about 20 minutes and we were able to move on to our G and Ts.

On Thursday, we worked at Workman. EW has a long list of repairs, and I am still cleaning, and need to write. He fixed the fridge fan and worked on the engine, while I defrosted the freezer, cleaned the fridge and wrote 4000 words. Not a bad day at all. Again, we were just thinking about stopping for the day, when I heard another power boat and a Guna man calling out “Hola!” I stayed below and when I heard EW say, “Pepsi” I thought this person wanted a Pepsi, but he was selling Pepsi.  EW bought a six pack, and gave the man a $20. (Note to self and spousal unit: We will get LOTS of small bills when we go to town later this month.) Instead of giving us change, the salesman/con artist asked whether he could sell us anything else, and offered onions, veggies, fruits – none of which he had on board. I said yes, we needed more veggies. (When in the Guna Yala, get fresh stuff whenever you can.) He let go of La Luna and began to drift away, repeated my list back to me and said he’s see us “manana”. As EW called him back for the change, but he waved it and said, “No problem! No Problem!” He was slick; as EW said, “He left before I could beat him up!” The whole thing happened so quickly that we could only laugh. So far, at 1500 on “manana” we have not seen him or our 13.00 dollars of change.  Lesson learned.

To be fair to us and the Guna, a few days ago we bought $10.00 worth of crabs and the fisherman took our $20 to another boat and got change and came back. That is the more usual experience here.

Gotta dash. Keith on Kook kindly left his large green stand up board for us to use and I need to exercise today. Time to get wet, followed by pizza night.