East Meets West and Has a Ball 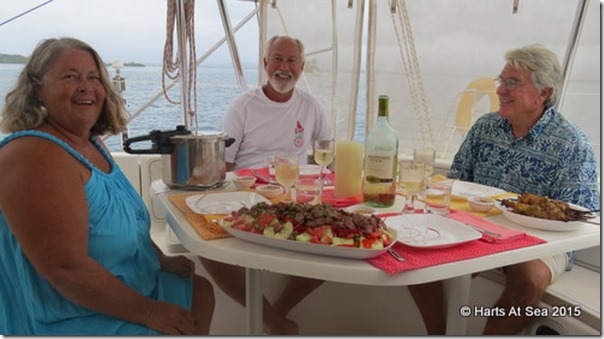 If either John or Lela played an instrument, EW would be absolutely ecstatic. As it is, he is merely very happy, having fun, and eating well. We are still anchored in Sabudupored, where the snorkeling is fine, the thunderstorms mild and not right overhead, and the neighbors are both strong and good-looking. It doesn’t hurt that Lela is a fantastic cook and a generous soul.

We met them in the Lemon Cays where they invited us and Jim and Christine from Ullr on board their cat, Yachtsman’s Dream, for grilled hamburgers on the Fourth of July. John and Lela are from Richmond, Washington (that’s the western USA) while we are from Maine (and kind of Florida—both eastern USA). Hence, the East Meets West. John is retired from the navy and Lela is a retired nurse. They have two sons and one grandson, and sail a catamaran. Other than that, we are just alike.

Not really, but we all enjoy each other, we all have have a well-developed sense of humor, and we all help each other out. Furthermore, we all like to eat, two of us like to cook and two willingly clean up after the cooks. See, we are twin couples from different mothers. What we are – are cruisers. The longer we cruise, the more people  we meet, and the more places we visit, the better I understand what makes a successful cruising couple. * Some of those qualities are:

We hope we get to introduce them to John and Lela – who also embody all of those qualities (as do Jim and Christine from Ullr and Becky and Denny from Kokomo. Meeting people like this is one of the reasons I love cruising.

So, back to the original point of this post. Both La Luna  and Yachtsman’s Dream left the East Lemon Cays and headed east. We went to the Green Island group for better cell phone connection, and they went to islands a bit farther north to check out the snorkeling. (Snorkeling is to Lela what writing is to me and music is to EW.)  A few days later they hailed us on the VHF to see whether there was room for another boat here in the anchorage. Oh yeah. We were alone here, and there was plenty of room. Since then, we’ve snorkeled together, Lela had kayaked while I have paddled on Keith’s board, John and I did a trash burn on the beach, we took a dinghy ride to “town”, and we have both hosted the other boat for dinner on numerous occasions.

The burn happened just after they arrived. I had told EW that he had to deal with the trash and he and John set up a time for a beach burn, and then it rained a bit. After the rain, both EW and I realized that he couldn’t go to the beach due to the sand fleas (remember, they come out after a rain) since Lela is afflicted the same way, John and I did the burn. Lela was cooking Thai food that night and had invited us over. (Yeah, life is tough when you cruise with great cooks.) John and I have a bit to learn about running a trash burn, but we got ‘er done. EW had felt guilty for deserting the expedition and hoped I hadn’t been uncomfortable going ashore with a man who was relatively unknown to us. “No problem!” I said. “We got along like a house afire.” “Did you really just say that?” asked EW. And I told him about our adventure including (icky alert. the following anecdote may not be suitable for landlubbers):

“John realized that we both were burning our used toilet paper and we talked heads for a bit.” (NOTE: Cruisers talk about heads just like new parents talk about their baby’s poop. It happens.) “We had a bit of trouble getting the fire going,” I continued, “but we worked it out. Seems fire is a bad thing on Navy subs so that’s not John’s best skill. He said that ‘ The Hunt for Red October’ is the best submarine movie. We had a good time. He even laughed a  couple of my jokes.”  EW asked about the jokes. “Well,” I said, “He told me Lela was spending the time cleaning the boat for company. I said, ‘You mean us?’ and he said ‘Yes.’ I told him we were no longer company. We’ve already eaten aboard your boat once, you’ve been on our boat, and we are burning used toilet paper together. I think once you burn toilet paper together you can no longer be considered company.”

EW rolled his eyes. “You really said that?” “Sure. He was a bit startled but he laughed.” 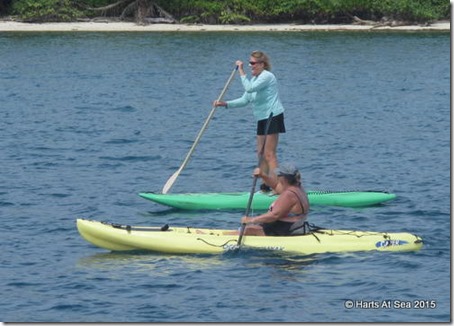 Since then, we’ve had more dinners together, shared recipes, books, movies, and lots of stories. Lela has provided her itch relief treatment to fellow bug sufferer EW, and EW helped them fix their outboard. I led that expedition to Nargana for provisions as I’m the only one of the four who had been there.

So that’s what it’s like when Eastern cruisers meet Western cruisers. State- or even country-of-origin doesn’t matter. Once you’ve broken bread together, shared stories and laughter, helped each other a bit, and burned your personal waste together… you are friends for life.

And that’s what makes a successful cruising couple.

*My apologies to those solo sailors, both men and women, who started out as part of a couple, or were brave enough to follow their dream alone. I cannot conceive of doing that. You all amaze me. I’m part of a cruising couple, which presents its own rewards and challenges.

P.S. Since this post was written and before it was published, we were joined by Ocean Star and Ullr. We went on a group snorkel and Yachtsman's Dream (as the only Cat) hosted all of us for tapas and sun-downers. Music provided by EW and Jim on Ullr. Oh yeah. Life is definitely good. Two Guna ladies, one in traditional dress, the other, who lives in Panama city, dressed in a more modern style. 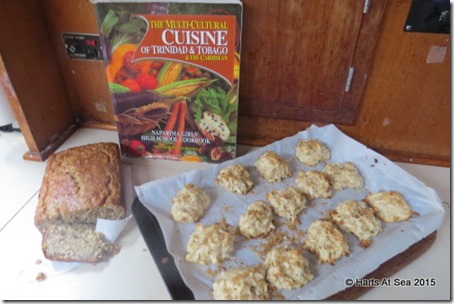 To go with the Thai dinner, I made coconut cookies (and banana bread for EW) both from the cookbook I own thanks to the recommendation of another cruising friend for life, Diana from One White Tree. 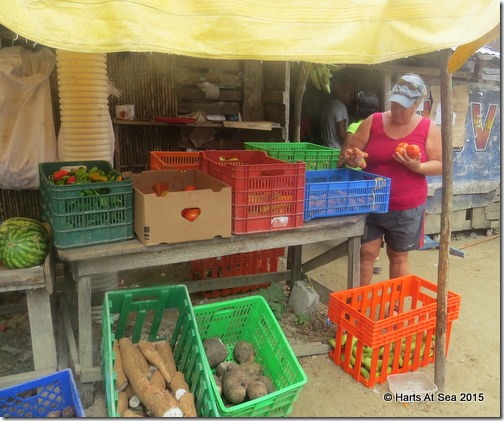 Lela choosing tomatoes at the larger of the stores on Nargana. Cruisers call this store “Wal-Mart”.