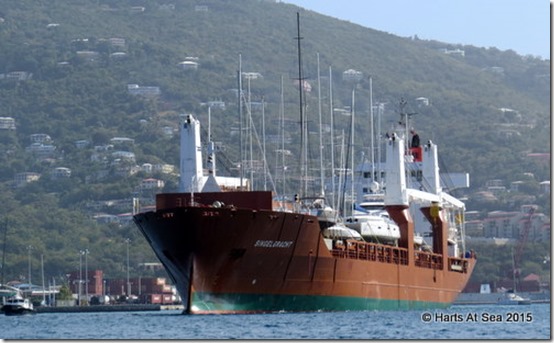 It seems everyone wants to know about our plans for hurricane season. We certainly have been sitting here too long, and we are both anxious to move on, so … see that big ship?

Just kidding. Unlike many other boats leaving St. Thomas this year, we will be powered by our sails. In the meantime, we have watched over eight transport ships load boats destined for Europe or the US. It must be an amazing feeling to watch your “baby” and your home be hauled out of the water and strapped onto a ship.

So are we ready?

Well, not yet. We’re waiting for one Sailrite order and for new credit cards which were sent to the old address. As soon as those cards arrive at our Green Cove Springs mail drop, we will have everything waiting there packed up and sent here.

In the meantime, we need to provision. The sail over to the San Blas should only take 8-10 days, and we’re going straight there, so it would be easy provisioning--- if things were available in those islands. Jaime’s message listed fewer than 20 products sold in the only store. At the end of the list, she said, “Notice there is no etc.” She did say they sell fresh fruits and vegetables delivered via small boats. We’ll purchase and stow enough provisions to last at least six weeks by which point Jaime and Keith will teach us, guide us, and show us the way to Panama City for the next round of provisioning.

In the meantime, we are picking up some things they need—items as diverse as fake ice tea and a new generator; stowing things we need; and getting stuff done online while we have the Choice program. Once I can figure out the technology, our cell phone will provide Wi-Fi while we’re in Panama.

Summer has arrived in St. Thomas. The days are hotter, there is less wind, and more humidity. We aren’t used to it, complain to each other daily, and remind each other, “It’ll be worse in Panama”. How’s that for positive thinking? We will be much closer to the equator. I plan to write in the morning, jump overboard for an exercise swim/snorkel, and then tackle boat projects in the afternoon. We’ll eat lighter meals, consisting of fresh fish caught by EW (no pressure there), and the fruits and veggies Jaime assures me are available weekly from the Guna (formerly known as the Kuna Indians).

(Jaime and Keith, if you are reading this, please be assured we will take time to sail to other islands and to explore with you. All work and no play make for exceedingly dull blog posts and articles.)

For now, I have to complete the tasks which should have been finished weeks ago, and EW has to push me out of my hunkered down mode. For some reason, leaving any spot (except Georgetown in the Bahamas) is difficult for me. That first step is hard. Once we are off and on our way, I’m good.

NOTE: Did you catch “Guna” instead of “Kuna”? According to Jaime, there is no “K” in the Guna language so they changed the way their name appears other languages. When I went to check on that, I learned we won’t actually be in the San Blas, either. According to Wikipedia, we are going to visit Guna Yala:

Guna Yala, formerly known as San Blas, is an indigenous province in northeast Panama (Official Gazette of Panama). Guna Yala is home to the indigenous group known as the Gunas. Its capital is El Porvenir. It is bounded on the north by the Caribbean Sea, on the south by the Darién Province and Embera-Wounaan, on the east by Colombia and on the west by the province of Colón. 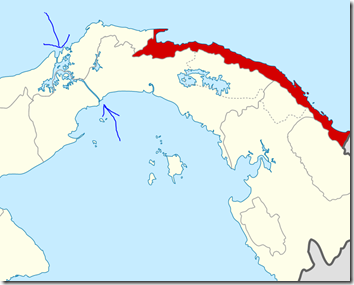 The Guna Yala is in red on this map. My funky blue arrows show both ends of the Panama Canal.