Home Archives Profile Subscribe
When is Sargassum Not a Good Thing?
Mother's Day with the Tree Top Band

Or “Rising to the Occasion”

Facebook has become a vital communication component for cruisers. There are Facebook groups for Grenada, Trinidad, the USVI; there are groups for those who live-aboard, those who sew on boats, those who cook on boats; and of course each of us has groups of friends and family back home.

As we’ve been stuck  um blessed to be in St. Thomas until the new sail arrives, both EW and I have become addicted to Facebook. We pay a monthly fee for Wifi, and we are making sure we get our money’s worth. Once I learned to differentiate between ads, ads re-sent by friends and family, and actual messages by friends and family I discovered that I can learn a lot from Facebook.

Some of the things I’ve learned have worked for me (us). Others have not.

So, let’s start with a win. Back in 2010 in Hampton, Virginia,  we purchased a dinghy step — the kind that helps you step from dinghy to deck. Until we moved permanently off the dock, we had used the swim ladder in the stern to get from dinghy to deck. Once we began living aboard on a mooring and at anchor, we realized side entry with a step would be better. This spring, the old step broke. (Of course.)

There are no steps in the marine stores on the island, and it appears that the one we purchased is no longer available anywhere. (Of course.) Furthermore (What would these stories be without “furthermores”?) the two steps that would be available had we not been in St. Thomas cost 60-something, or 200-something, respectively. I refused to spend that right now. 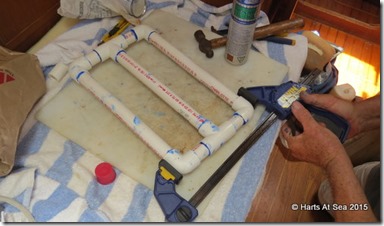 So, I went online to two Facebook groups and put out the message asking if anyone had a cheaper alternative. This lovely sailing woman whom I've never met, told us about a PVC step her “DH” had made (that’s Dear Husband to the social media impaired). I and another lady asked for photos, and she promised to get back to us as soon as possible. She also said that they weren’t on or near the boat, so she’d see what she could do. Within a couple of hours she had sent a photograph of a drawing detailing how to make the step. EW looked at it, we made a parts list, and he trundled off to ACE where he purchased everything we needed for $11.00 (or 10-something to keep all the figures in the same vernacular). We could use the hooks from the broken step, but he used new line. 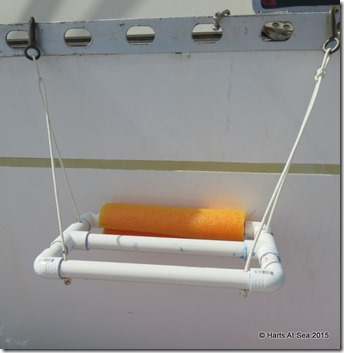 Now lets move on to a fail—or two.

I had posted on the cooking on boats FB page that I was astonished that a small jar of Fleischmann’s yeast cost $12.06. (Or 12-something. That’s more than a step!) I didn't even want to purchase small jars of yeast. On other Caribbean islands I’ve found vacuum foil bricks of yeast, that I store in a ClickClack container in the fridge. It stays fresh for months. When I posted that I couldn’t find those packs here, two folks suggested that I make my own yeast.

You can make yeast? Well, that makes sense because someone makes it. I was game to try. Now please note, I understand about sourdough starter. It requires care and feeding. EW takes care of himself and I still occasionally feed him popcorn for supper. Does this sound like a woman who will take care and feed a mushy pile of dough? It does not. So I skipped those recipes and went right to yeast.

You can actually make yeast out of nearly any fruit as long as it hasn’t been washed or waxed first. (Of course after the big something from which they are surviving no one will have to worry about waxed fruit, so that’s good.) Fruit, however, will add flavor to your bread, and that may not be to your liking, so most recipes discuss making yeast using potatoes. One recipe said that you simply save the water after you’ve boiled potatoes, add sugar and flour and let it sit in a warm place overnight. If it’s fermenting and bubbly, you have yeast. If it’s just a lump, toss it and try again. (They actually said that. Didn’t sound very promising to me. Made me wonder if they would eat a lot of leavened bread after the big something happens.) 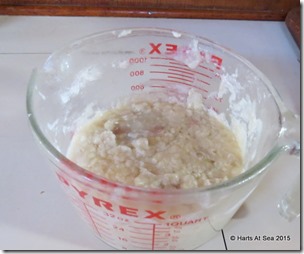 My potato yeast did not rise to the occasion and I ended up with a lump. Much to EW’s delight I was willing to try again, until we took a quick trip to Cost U Less where we found—Ta-Da!—a brick of yeast. Two whole pounds of yeast for six-something. (That’s just over half of a dinghy step.) For the win. 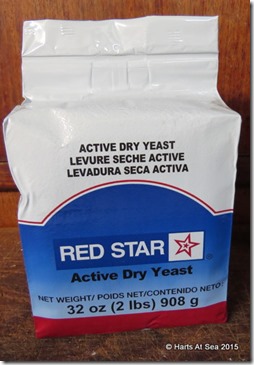 For the second, final, and most spectacular fail of the week, let’s discuss getting into the dinghy from water that is over your head. Our cruising/musician friend Gavin, posted what he called is an easy way to enter your dinghy from the water. It actually looks elegant.

NOTE: You probably won’t be able to see Gavin’s video as it is on Facebook. He hangs with his back to the dinghy, holding on to the carry straps, tells us to curl our legs up into our bodies, throw our head backwards into the water and “Bob’s your uncle!” Gavin ended up kneeled in his dinghy. It was awesome. It looked easy and elegant.

I pretty much do not look elegant when I go from water to dinghy. EW can kick and thrust himself up and then pull himself aboard with his arms. I cannot . I use a method that works for slightly out of shape 50-something (age nor financial worth) women. I watched Gavin’s video a few times and thought, “That looks easy. I bet I can do that.”

Yeah. No. I did not rise to the occasion.  Here is a video of my attempts. Feel free to laugh.

When we were in Guadeloupe and were swimming and snorkeling a lot, I devised a way for me to get back into the dinghy. We always have one five foot rope tied to a ring on the transom in case we need to secure the dinghy fore and aft. I take that line and put it through the large hand hold, leading it to the opposite side of the boat. I take another small line and tie that to the large opposite large hand hold, put a big loop in the other end using a bowline, and toss it over the side. Then I grab onto the thicker line, put my foot in the loop, and haul myself aboard. Is it elegant? No. But I can take care of myself, and both lines are kept in a way that they can be reached and rigged from the water. I’d call that a win.

But no one would call that elegant.

Posted at 05:58 PM in Galley Tips and Recipes, Living Aboard | Permalink | Comments (2)

Oh, Barb, that was a hoot. Thanks for those videos. No way could I manage a flip of any sort; my back hurts just looking at your efforts. We actually use something similar to your second, although we did buy one of those step things that still requires a good line so I can hoist this... um...no longer svelte (or graceful) body aboard.

Great read! And good on getting in the dinghy.