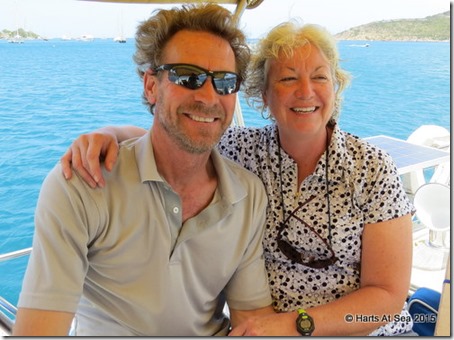 It’s been a busy week in St. Thomas. Most importantly, we were excited to have boat guests on Tuesday when cruising friends Steve and Lynn stayed with us on their way to the BVI. They are crewing on a boat heading up to Annapolis in the Salty Dawg Rally. Those who know Steve and Lynn know that they are outstanding sailors who have sold their boat and are renovating a home. But they’ve not given up the sailing life and we hope to entice them aboard for a longer visit.

In the meantime, they flew into St. Thomas late Tuesday afternoon, and we were ready for them. Yes, I had to clean the boat and make room in the forward cabin. Steve is the guy who kept his engine compartment so clean and well maintained that the Coast Guard (or Coast Guard Auxiliary) asked his permission to tour it with other boaters. Lynn is equally neat. This is a Facebook post from when she was getting ready to sell their boat. 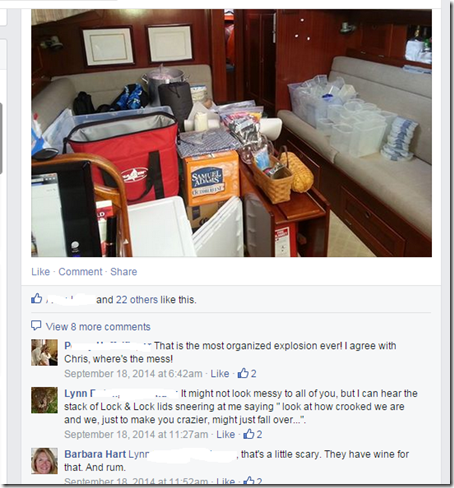 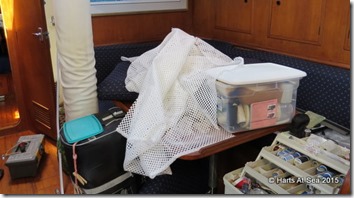 To contrast, this is a photo of La Luna when we were getting ready to cross to the Azores from St. Martin. Lynn, this is a mess.

I didn’t try to get to get La Luna to Celebration standards, but I did spend a few hours organizing and cleaning, and that’s not a bad thing. (Plus I’m done for a week. Woot.) Once again, I made my new favorite meal: barbecue chicken cooked in the pressure cooker. EW finished it off on the grill. Everything was nearly ready when they arrived, so we had a lot of time to catch up. And we had a lot to talk about: our crossings, the Azores, selling their boat, buying a home, renovating a home, neighbors, other boat friends, kids, and more. We talked long after they should have been asleep. It was so great to see them and hard to let go.

They wanted to take the noon ferry to Tortola, and EW and I had reconnaissance to do for friends on Kookaburra who need a new generator, so I suggested that it “wouldn’t be awful” if we all went in the dinghy into Charlotte Amalie. It was pretty windy, but I knew that even if we went to the closer dinghy dock at Crown Bay that we’d all get wet in the “rinse cycle”. How is a wet dinghy ride like being pregnant? Just as you can’t be a “little bit pregnant", on days like Wednesday you don’t get a “little bit wet”.

Still, I should have brought the poncho I have used to protect myself from the salt spray. (Especially knowing that when Lynn cruised she had made a Sunbrella wrap just for wearing on wet dinghy rides.) She and I took many waves over the bow. They guys didn’t fare much better. We were four drenched cruisers when we got ashore. 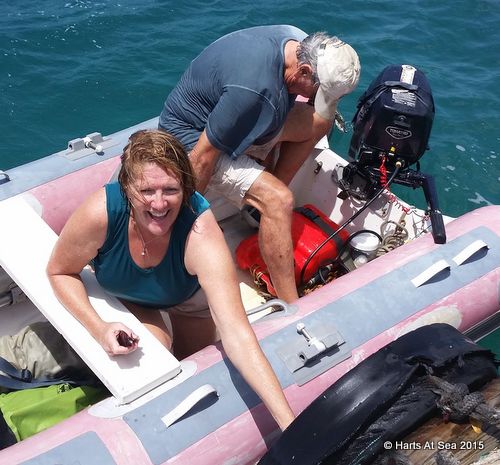 Our hair was wet and sticky with salt; my straight hair clung tight to my scalp in wet strands, making me look older and unclean. Lynn’s wavy hair was standing above her scalp in large curls. It may not be a look she would cultivate, but it wasn’t unattractive. She ran her fingers through it and laughed, saying, “People pay for this.”

“They pay for what?” I asked, thinking first of those who charter sailboats, paying for the “adventure” that is our daily life. But no.

“They pay for salt spray to style their hair.”

Research has shown me that yes, it is a “thing”. One for which you can purchase a spray bottle of salt water for $25.00; or for which there are many recipes for salt water styling sprays. And this would be different from the cheap “White Net” styling spray my mom used 40 years ago, how?

Evidently this is how:

Who knew we cruising women had been setting a trend? Hey, EW! I have a “salty, sexy, sun-dried, wind-styled” mane! It would be a shame to wash that out.

I’m glad we’re cruising. Sometimes current culture back home is too much to contemplate.

We dropped them off at the wall, just past the Customs fence near the ferry terminal. There is no dinghy dock; just tires tied to a wall. The dinghy was bouncing in the breaking waves. (Did I already take responsibility for this trip? It was my idea. EW, Steve, and Lynn were good sports. Good sports who wore wet, salty clothing for the next few hours.) Back to that wall and the dinghy: We had to get Steve, Lynn, two small cunnin’ backpacks, a 50-pound L.L. Bean duffle, and a 6-foot long box up onto the quay. Fortunately, a young man waiting at a job site jumped from his truck and offered to help. Steve scrambled up onto the quay, and EW and I handed the bag up 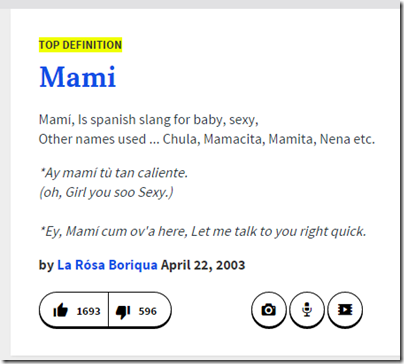 to the two men while Lynn held the dinghy.

Then, the young man reached down and offered Lynn his hand, saying, “I’ve got you Mommy,” with a Spanish accent. He later called me “Mommy” as well. It kind of made us feel old. But I’ve decided that he was actually saying “Mami” and that it still has the definition found in Urban Dictionary. If I’m wrong, I prefer ignorance, thank you very much. If I’m right, must have been all that “salty, sexy, sun-dried, wind-styled” hair.

And, in the category of “you can’t make this s#%t up, We arrived to find that the noon ferry was canceled, and they wouldn’t be able to leave until 2:00. Steve suggested it was time for a “painkiller” and who were we to argue. Evidently, the Big Kahuna has no qualms about serving drenched salty customers. (EW not only knew how to spell “Kahuna” but insisted on telling me that it’s the “surfer’s god”. Thank you, EW.) So, we got to spend another hour or so, visiting with Lynn and Steve in St. Thomas. I’d call that a win.

That evening, EW and I enjoyed a dry dinghy ride to Tickles in Crown Bay for Open Mic night. He didn’t play, so we sat at the bar with friends Ryan and Jenn and their entourage, and a number of musicians. It appears that Harvey has moved to St. Thomas. He’s right behind me, isn’t he? 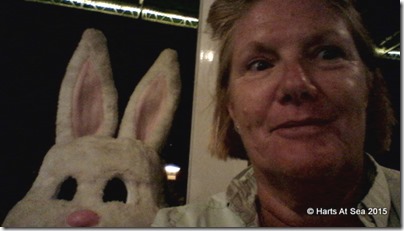 NOTE: The bit about Harvey being behind me was stolen from my Maine Friend Candace K., who delights me with her creative posts from Maine and her travels.

Finally, EW got into the act today, snapping this photo of me writing this post. I like it. (Don’t get excited. The cushions haven’t been covered and we aren’t using this peach color. It’s just a throw over the foam.) I love the new laptop nest. 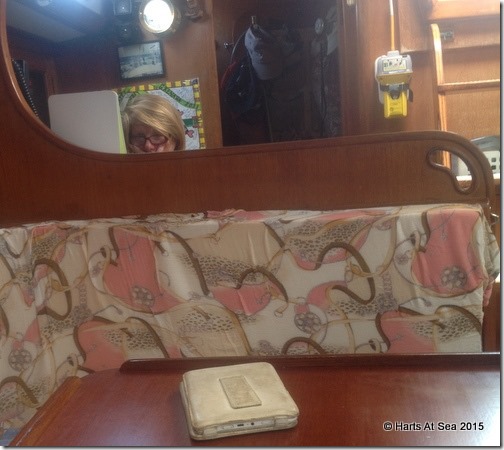