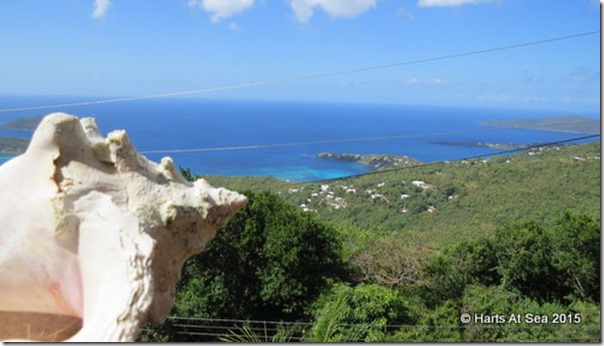 Mother’s Days with EW have been “interesting”. Only a couple of months after we met, EW agreed to accompany me to Waterville, Maine for a Mother’s Day lunch that included meeting my parents for the first time. (No pressure there.) Actually, Mom loved EW from the first, saying that he was “the best thing that ever happened to me”. Once we married, EW knew that if we broke up, he could go “home” to my mother for shelter, hugs, and sympathy. You may find that humorous, but it was no joke.

The next memorable Mother’s Day occurred less than two years after we married. We purchased a home one year and a 26-foot sailboat the following autumn. When Mother’s Day rolled around, we were working on a list of boat projects, but EW had joined the local volunteer fire department which had scheduled a training on Mother’s Day weekend. (You can bet I was all fired up about that.) Still, my folks drove down to Yarmouth where the three of us shared a picnic lunch. Daddy painted the boot stripe on the boat, and Mom played with our pup, Coffee. They didn’t get to see EW that day but still sang his praises. (“Yeah, yeah. I’m proud he’s a firefighter, Mom.”) 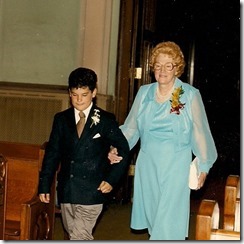 As I was fortunate to become more involved in Favorite’s life my Mother’s Days became a bit more special. (Mom adored him, too. Here Favorite ushers Mom down the aisle at our wedding.)  Of course, when Mom was still alive, we visited with her and Daddy. Later, EW would find something fun and special to do. Once a special Mother’s Day Brunch in a Portland hotel with his mom and sister; at other times as simple as a picnic – with or without boat projects. Mostly with. It was that time of year in Maine.

Once we started cruising, Mother’s Day began to revolve around a breakfast or brunch prepared by EW, and (if we were in the right location) my wonderful Mother’s Day call from Favorite – who never forgets. We aren’t much for presents, but this year EW purchased a quart of maple syrup because we were tragically out of it, so I knew I could expect home-made pancakes and bacon on Mother’s day. On Saturday, EW received a phone call from our musician friend, Jerry. I knew what was going on, and could tell EW wasn’t sure if it would fly. He concluded the call by thanking Jerry and telling him he'd,“let him know". 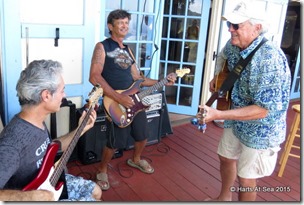 Recently, Jerry has been organizing “Pot Luck” music jams. We missed the first one because he didn’t have our number and the second one because it was on a beach after it had rained. Sand fleas are worse on a beach after a rainfall, and EW wisely decided not to brave the poisonous (to him) pests. On the first Sunday in May we took a taxi up to the top of Dorthea to a home overlooking Hull Bay, where “Coach”, Diane, and their two friendly mutts, Waggley and Tramp live. It was a great day, Diane is a calm and gracious woman, and the view was to die for. The music was good, too. (That’s Mick on bass, Jerry on lead guitar, and EW during our first Tree Top Jam.)

Back to that phone call from Jerry. From EW’s side of the conversation, I could infer that Jerry had called to say that Diane (mother of four) and Coach had invited us all back on Mother’s Day. EW wasn’t sure if that is how I wanted to spend “my day”. Well if I could have done anything I’d have been back in Maine for the lobster feed at my niece Jean’s home, but life isn’t perfect, and music in the treetops is pretty special, and really, how bitchy would I have to be to deny EW this opportunity? Way more bitchy than I am, that’s for sure. Coach kindly offered to taxi us up and back and the day was on.

It was a great afternoon. By the time we got there, Diane’s three grown daughters had called to wish her a Happy Mother’s day, so we were both waiting for our sons to call, and neither of us roamed without our phones until our day was complete. (Both “boys” called by 3:00 PM well within the “I haven’t forgotten Mother’s Day” time frame.

I learned why most musicians aren’t overweight. Playing music trumps eating. (It does not trump drinking beer, but one can do that easily between songs.) The potluck offerings included crab salad, fried chicken, potato salad, two home-made pizzas (moi’s contribution), Texas beans, and an amazing chili, cheese, chicken dip. EW ate the last two small pieces of pizza as we were in the car on our way back to the boat. That was all he ate for the entire day. He played music for six hours and drank beer. He had a really, really good Mother’s Day.

After breakfast, I did laundry, made two pizzas, and was then transported to the treetops, where I could listen to great music, chat with smart women, eat good food and play with two cute dogs. I’d call that a Mother’s Day win. 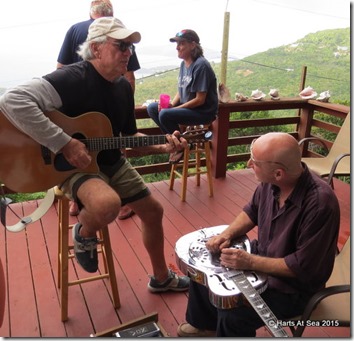 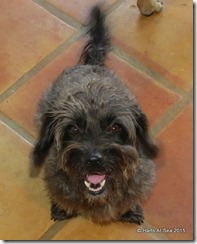 NOTE: During our first Tree Top Jam, I chatted with Diane (remember, she’s from Texas) and mentioned we were out of Maple syrup. We are both charming women and we are both strong women.

Diane (with a Texas accent): Yew know you can make Maple Syrup?

Me: Yep, with a number of Maple trees, flowing sap, and a good fire.

Diane (Smiles then goes all serious again.): No really. You just need some maple flavoring and a little syrup. (I assume she meant Karo or some such thing.)

Diane: My kids just loved it!

Me: I really like you, and I’m sure your kids were fine with it, but that just won’t work for me.

She was tickled when I told her that I had gotten Real Maple Syrup for Mother’s Day. For those of you keeping score, while EW’s New York syrup is delicious, I have (of course) always favored Maine syrup. The only one available here at Cost U Less is from Vermont, so we compromised. 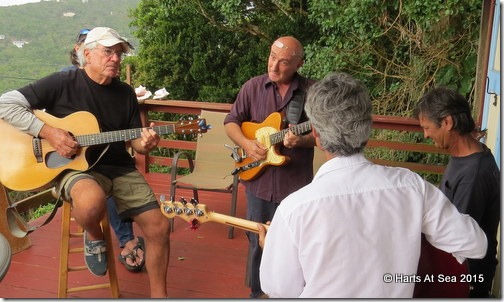 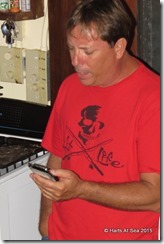 Jerry and Diane and Coach all invited a few friends to listen and enjoy the day. Brian wins the Best Use of Smart Phone award when he quickly found the lyrics for one song. 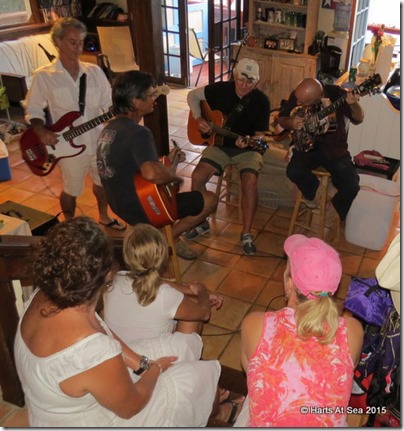 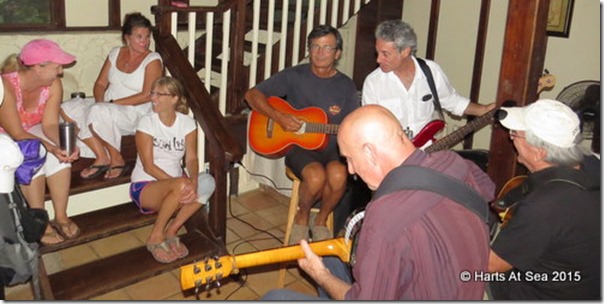 Yep. This does not suck.