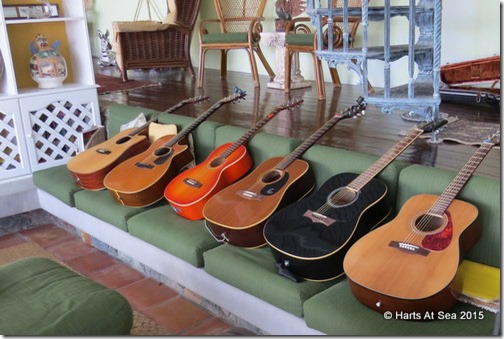 Some people, as I do, forget a word, but remember the first letter and make up the rest. (Some of you do this, right? Please tell me I’m not alone in this.) This is not age, as it’s been a “challenge” for a long time, and probably is a result of doing too many things at once, having a conversation and thinking of something else, or of making intuitive leaps and landing on the wrong lily pad. In any case, confusion can result.

EW was made aware of this very early in our relationship when he asked me to pick up a six-pack of Molson, and I returned with Michelob. There’s a big difference between Molson and Michelob, but when questioned I still replied, “Well, it’s an ‘M’ beer.” EW was not amused, yet we (well I) have had “M-word” challenges for the past 30 years.

Recently, someone posted an article on Facebook with this title:

Of The Time When Arguing And Won’t Admit It

I don’t agree with the article, but loved the headline anyway. It rates right up there with my argument stopping comment, “I wish you wouldn’t be so insistent when I know I’m right.”

And yes, this is all going to tie together.

Yesterday, we were excited to head up into the hills for yet another Saturday Pot-luck Jam. This one was hosted by Richard and Sharon, friends of Coach and Diane. Richard and Sharon have spent the last year taking care of a lovely home on St. Thomas. Silk Cotton Villa is available for rent when the owners aren’t on the island. There are four lovely en-suite guest rooms, the owners’ apartment, and a kitchen/dining/living area completely open to the pool and view. Jerry, EW and I were to ride up with our friend Bethany who would pick us up at Crown Bay, after assuring me she had plenty of room in her car for three people, two guitars, and accouterments. Just as we gathered to wait for her, Bethany called to let us know she was 20 minutes late. No worries, let’s grab a beer at Tickles while we wait. 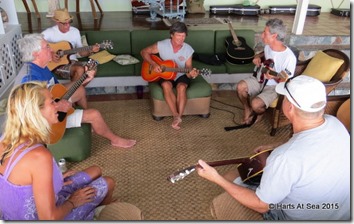 EW suggested that I call Bethany to ask about her car; I did and told the men that she would be in a black Escalade. I was kind of surprised that she had a car that big, but she has been a diving instructor and has a largish dog, so didn’t question it. I was thinking of other things. (You know where this is going, right?)

So we relaxed in an outside booth at Tickles where we could watch the traffic. Time and time again, EW would say, “Is that her?” and Jerry would reply, “No. That’s not an Escalade. Those are huge. That’s not a huge car.” Yes, Bethany was on her second pass when we decided to wander to the parking lot, to find her smiling from her black Ford Escape.

We had a great afternoon. How could we not --- look at this place? 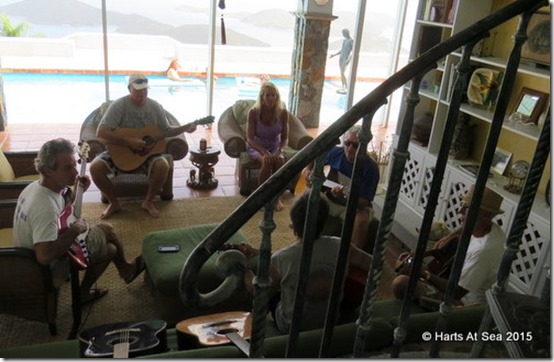 That evening on La Luna EW and I were talking about our day and of course, he brought up the “E-word”. “How could you have gotten it wrong? he asked, “ You told us it was an Escalade right after you got off the phone with her!”

He’s right, but I find it fun to blame him when I’m wrong, so I said, “You should have known. You know what I’m like. Remember the Molson?” He looked at me. “That won’t work. You waver. Sometimes you’re spot on and sometimes you go all M-word. What am I supposed to do? How do I know which way you are wavering — I can’t second guess you all the time. You’re … you’re wavery!”

We both have a point. But sheesh, he has over 30 years of experience with me. He should know when I say Escalade, I could mean Eclipse. Or vice versa.

But he does have a point. I am all wavery. Or I would be if that were a word. And I’m right about that and most other things. If EW disagrees, he can get his own blog.

As for the Saturday jam at the Silk Cotton Villa, we can both agree it was an E-word—Excellent!

The above photo was taken from the Silk Cotton Villa Website. Check it out!