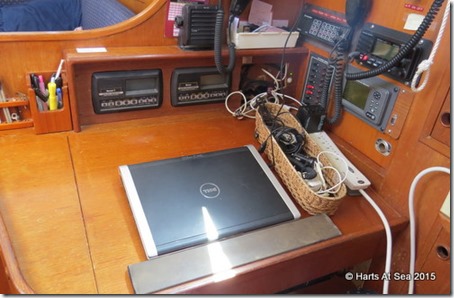 Chart tables are beautiful things. Ours is teak with a heavy lid and amazing hinges. Of course our chart table was created for La Luna when she was built 30 years ago. Before we bought her in 2002, various accoutrements had been installed that made it difficult to raise the lid past coiled microphone cords. In addition – well, charts.

Chart tables of yore (and maybe of today) are designed to hold charts for storage, and to allow space for working with charts and plotters and dividers and parallel rules on the slightly angled top. When EW and I took the Power Squadron’s Advanced Navigation Class, we more often spread the charts on the table because it’s bigger. The charts in storage were kept under the table with the tools mentioned above, and all were difficult to retrieve due to the cords mentioned above above. When we sailed in Maine, and all the way down the coast, through the Bahamas and to the Caribbean we used both electronic navigation and charts. The chart in use is usually on deck in a plastic cover, not on the chart table. The laptop, running navigation software, is on the chart table.

A chart table isn’t usually an optimum place for a laptop. In our case, it was a bit  too high to be ergonomically correct when seating and much too low for standing. When we lived aboard in Maine and I worked from home

, my “office” was my seat at the dinette, because it was just too uncomfortable to use the laptop at the chart table. In addition, the large top and 1.5” fiddles caused us to worry that the laptop wasn’t secure in rough seas. 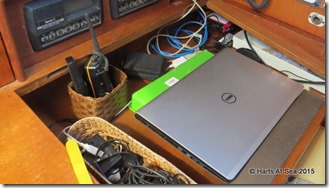 On our way to the Azores last spring, I had one of those epiphanies EW has come to dread: the kind that means A New Project! A New Project he had never considered! Knowing that he would have to do most of the actual work for this project, I presented it softly (for me), but I sold it very well. While we were on the dock in Horta, our first port of call, I convinced him to remove the heavy teak lid. (Sometimes I surprise myself with my powers.) We had no idea how marvelous the hinges were until we had to remove them. One of us held the lid, while the other worked on un-screwing many tiny-headed, long screws. Part way through the process we wondered if we’d be able to actually remove the table without destroying something.

So, now that we had removed this lovely, heavy piece of teak? What to do?  We knew that this project would not be completed for months, and we wanted to field test it, so the lid and hinges, charts, and tools were stored in a safe place, and I went in search of something about 2” tall that would serve as an interim base for the laptop. I found a cheap ugly green silverware drawer liner. Hey, it worked.

Here’s what I knew from the start:

It worked great, and gave us an accessible place to store all the power cords for charging two cameras, a Kindle, an iPad, and an iPod.

So, that brings us to this time of puttering and “fun” boat projects in St. Thomas. (DEFINITION: “Fun” projects may not actually be fun to do, but are projects mainly dealing with the beautification of the boat, or to enhance our enjoyment of the living space. The person or persons undertaking the projects may not consider them fun in process.) I’ve been constructing cardboard models of laptop bases – ones that would allow us to raise it up 2 inches, have a place for a mouse pad, and provide the ability to tie the laptop down for really rough seas (seas that I never want to experience, but still).  I also wanted better storage for that charging gear, and other things frequently used in this location.

And note, we had to work around big honkin’ bolts that hold the Pactor Modem in place under the chart table. (Fortunately placed far enough outboard to still allow room for our legs under the table.) My first prototype (after the ugly green silverware compartment) was a bit elaborate, including the construction of multiple boxes. I knew he’d never go for it, so I set the idea aside and moved on to thinking of other projects, particularly one I’m contemplating using material from the old jib in order to make various open top fabric “boxes for open storage.

Brilliant Idea! Instead of asking EW to make wooden boxes or have me go from store to store to find bins or baskets to exactly fit the space, I could make small sail cloth boxes, to corral the stuff. On a passage, most of the stuff will be moved to a cupboard, so I don’t have to worry about it flying around. But cruising sailors spend more time at anchor than at sea, so that’s no biggie. This week, I planned the laptop pad, and presented the finished idea to EW, who promptly improved it. 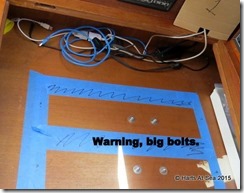 Instead of a strong shelf supported by three braces running along the length, EW took two sheets of 1” PVC board, cut a rectangular hole out of one to allow the bolts from the modem, and  screwed them together from the bottom. At my suggestion, the top board is 1” wider than the bottom with the overhang at the back to allow for the cords to run to that side of the laptop. (One power, one USB for AIS.) One of the challenges I’d discovered during 9 months of using the prototype is that we had to protect the cords going into the laptop. The wide shelf will prevent the baskets from pushing onto the cords and memory sticks. 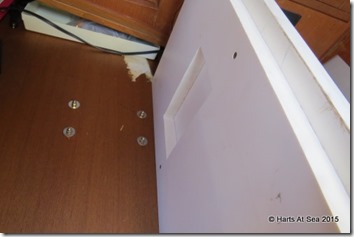 And the piece de resistance for the whole project: a little bridge to go over the USB connection on the starboard side of the laptop. It protects that port from damage, and provides an excellent rest for one’s wrist. Double Sweet! 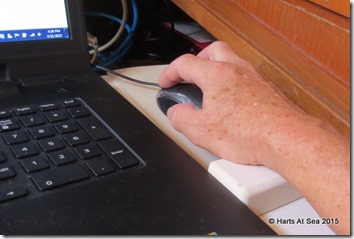 This is still a work in progress.

AND! I love writing here. I’m writing more and now I can work without moving the laptop to the table, and we can eat dinner without moving everything back to the navigation zone.

I am a happy sailor. We are an outstanding team. Seriously. We each have different areas of expertise, and we each come up with ideas for all areas of the boat. He will have a sewing project for me, and I’ll have a power tool project for EW. It all works. And it looks wicked good! 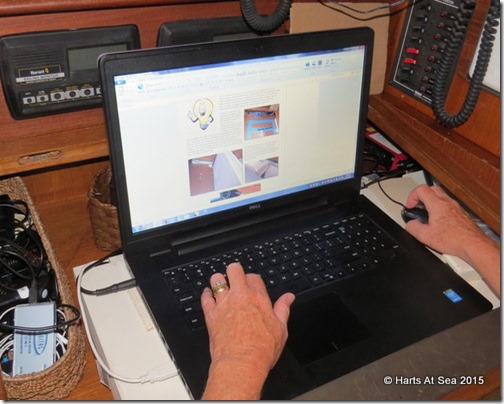