The Rest of the Story (About the Endurance Crossing)

There are still folks who are surprised to hear we didn’t head south to Brazil and Argentina, and others who have commented that I seemed to have finally rediscovered my sense of humor.

Thank the universe for both things. So far, the Rest of the Story has only been shared with a few special friends. (Weren’t they lucky to get dumped on? They all unfailingly provided love and support and that is why they are special friends.)

I had mentioned to someone that “Seventeen things went wrong or broke during the crossing.”  A curious person, (or sadistic) he wanted the list. I may or may not provide it, but let’s start with Number One:

When we left Sint Maarten the second time, we had a few uninvited guests. Many of their progeny remained on board for the entire trip, across the Atlantic, through the Azores, into the Canaries, and back across to Guadeloupe. At first we weren’t sure what we had. Well, at first I was in denial, because our guests were invisible and only bothered EW. “Sure, Honey, I understand,” she says with an eye roll. The short version of the story is we (probably EW) brought sand fleas on board. In addition to being invisible, they are stealth biters, we never saw them and we never felt them. EW is allergic to them. EW had been allergic to them for years and he is even more sensitive now. The tasty and rare and fragile flower known as EW can be brought low by sand fleas and it isn’t funny. (Well, again, it was kind of funny on the way to the Azores, before we harbored colonies and when EW was only getting bit every so often. (I received two bites. All year. Just two.)

In the Azores, we relied on a pharmacist who spoke English to read the labels on pesticides to help us chose the best one. (In the Azores, fleas are “pulgas” One is “pulga” No one ever has one flea.) Since we had no sand on the boat, our guests burrowed down in the bed. Since we slept in the main salon underway and moved the bedding to the master stateroom once we arrived in the Azores, we had colonies in both cabins. Oh joy.

We would spray the boat down, close the boat, take the bedding to shore to launder it, spend the day seeing the sites and go back to scrub the counters and restore the bed. Every couple of weeks. This kept them to a manageable level, but we knew we weren’t killing the eggs. EW’s reaction got worse, I was still persona non grata to the beasts, and he was supplying sustenance to more and more of them, which all happily copulated (or whatever it is that fleas do) and produced still more. Still, it was uncomfortable and a pain in the neck, but not horrible ------- until we crossed back to the Caribbean.

On the crossing, someone is always sleeping or resting in the bed, or on his or her way to the bed after dining or completing a few chores. And we certainly couldn’t get off the boat to let the poison do it’s thing. So, we grew more fleas on EW’s blood. And EW developed greater allergies to the bites, and some bites got infected. I nipped that problem in the bud by using my Mom’s tried and true remedy: soaking affected area in salted water so hot you cry for your Mommy. Works every time with shallow infected scrapes, cuts, and bites. This is not a remedy promoted by EW’s mom, so he therefore thinks I’m a sadistic B!$#h. Tough S^&t. When bites in his ears prevented him from hearing, a hot wash cloth reduced the swelling. When he couldn’t see out of one eye, a hot wash cloth returned his vision. (See the swelling in his right hand, above.) 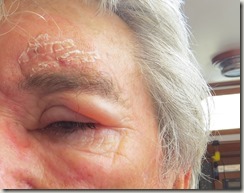 As you may imagine, this was not fun. We’ve always enjoyed that line, “If Momma ain’t happy, ain’t nobody happy.” This is also true about captains who are miserable with real pain, discomfort, swelling, and itching. EW wasn’t happy, we had other issues (remember 17 things) and it was not a fun crossing. (To be fair, remember that I had an infected tooth and was battling galley issues. We were not examples of favorite crew, and this was not a happy boat.) Once we arrived in Guadeloupe, our first order of business was to get EW medical treatment and to find an exterminator. I had worried about the second part all the way across the Atlantic.

Fortunately, I found the French word for exterminator, looked them up in the Yellow Pages, and found one who spoke English. On New Year’s Eve, Thiery met us in the parking lot and discussed the issue. After phone conversations and texts he had already decided that, because of those four questions, we should tackle the project ourselves. He sold us the product, directed me to their American website so I would know and understand it’s use and the safety procedures, and drove us to his favorite hardware store where he helped us purchase a pump sprayer, suits, goggles, and gloves. For the next two weeks, we would stow hard stuff, tape the cupboards in the galley, don our gear and spray the whole boat: cushions, mattress, under the bunks, and the storage areas under them down to the bilge. Afterward, we’d go on deck, strip off the jumpsuits and shower on deck. (Though we were in France, we opted for old swimsuits under the Tivek.) Then we would dress in the cockpit (France) and head off for a full day of sightseeing or shopping in Jarry.  After which we would return and clean the boat. (Jarry, an “industrial park” outside of Pointe au Pitre had a store for everything. The first day, we took the dinghy through the canal. The photo at the top shows the canal.)

We didn’t feel we could take a slip, visit other boaters, or have the refrigeration guy on board until the guests were under control. So, for the first two weeks in Guadeloupe we were isolated, and still using a small cooler for refrigeration. (It was shortly after the worst of this was over that good friends Lynn and Ken from Silverheels III sailed into town to rescue us from ourselves.)We found an excellent physician, who examined and tested EW and confirmed that we had sand fleas and that he was allergic. Medicine helped. I replaced the pillows, and ultimately we ditched the salon cushions. EW was no longer getting bitten in bed, but would get chewed up while dining or reading or watching a movie in the main salon. Still, while in Guadeloupe we treated the boat every two to three weeks to kill all fleas and eggs. We were successful.

How’s he doing? Well, there’s good news and bad news. For the good, he never gets bit on the boat, but we are still in the Caribbean and there are sand fleas. Whenever he leaves the boat he sprays repellent on his body, and a travel can of the stuff goes with us for long trips, swimming, etc. On the bad side of the equation, for EW, Fleas Happen, and when they do, he is very harshly affected. In fact, a couple of weeks ago he had to visit a doctor and learned that bites on his legs will cause allergic reactions (like hives) on other parts of his body (such as the top of his head). We will not be leaving here without an Epi pen.

And that, Boys and Girls, is the rest of the story of our Endurance Crossing, and one of the reasons we elected not to travel farther south. We needed to be closer to friends, family, and help. If we put those 17 things in order of occurrence, enough of them caused problems in the Azores or happened in the Canaries so that we knew we had to head for the Caribbean. The flea situation was just Number One in our early warning system. The other 10 or so things that happened during the crossing let us know we had made the right decision.

We've decided that making a crossing or undertaking a long passage is like reefing. Just as good sailors reef early and often, good sailors also must be sure of the boat and the crew before undertaking a rigorous trip. We don’t regret going at all, and would do it again. Nor do we regret making it a much smaller Atlantic Circle. Good decisions will keep us sailing and looking forward to the next adventure.

Sand Flea bites are dangerous to the skin, its nice to see that you all endured the journey