The "All is Lost" La Luna Review

Way back, back when we were dirt dwellers and had cable, there was a show on the Sci-Fi channel that

seemed to be a guy and two puppets watching old horror movies. The guy and his little buddies would talk through the movie, making fun or … well, frankly I never sat through more than five minutes of this so I don’t know what they did.

I was reminded of this while watching “All is Lost” with EW on our Friday Pizza and a Movie Night. Since we are in St. Thomas with Choice wireless, we signed up for Netflix so we can watch movies not in our on-board stash. We didn’t watch “All is Lost” before we went on our Atlantic circle, but had heard from other sailors enough to know that non-sailors would definitely be on the edge of their seats, while the cruising sailors would scoff at many of the events on the screen. EW and I scoffed. A good movie will transport me into the characters on the screen. I can’t count the times I’ve growled at EW for making a joke or comment when I’m enthralled with a movie. People in movie theaters who talk through the film drive me crazy.

On Movie Night, I was one of those people and it’s

OK because EW was a willing participant. We talked through the whole thing; we laughed at some things and were disgusted with others. It’s probably unfortunate that we had heard about the inaccuracies before watching the movie because we didn’t give it a chance. We were watching Robert Redford, a great actor in a performance that was highly praised, and I just couldn’t get past the fact that he had never prepared a ditch bag before crossing the Indian Ocean. EW couldn’t figure out how he hanked on the storm jib when there wasn’t a mid-stay or forestay available for the hanks.

This after he deliberately sailed his boat back into the offending container (oh yeah, like that would happen) and waited for-absolutely-ever before closing the hole and pumping the bilge. By the way, there is no possibility that amount of water would pour in that hole under those conditions, or to back up a step, that he would have slept through the initial impact. The first scene confused us because we couldn’t figure out what was behind him when he wrote his note as the container was long gone, but the movie didn’t lose us until “Our Man”, as he is named in the credits, woke up with water over the floorboards. Essentially, the movie lost us in the second scene. That was quick.

(At right, the orange, blue and yellow blobs under the companionway are two ditch bags attached to large life jackets to help them float. They were prepared prior to leaving the dock. Now there’s an idea.)

When one is cruising, one becomes intimately familiar with the normal sounds and one comes to immediate attention when something is different. That container did not sneak up silently like a second story man and cut a careful hole above the chart table. That container hit his boat and made a strange noise while doing so. Just ask EW how many times he made a minor sail change or the wind picked up and I would bounce up and ask, “Everything OK?” And that’s when I had an excellent sailor in the cockpit. To provide an analogy for non-sailors, once one has a baby, the soundest sleeper will awake at the softest cry; and once a sailor is at sea, the soundest sleeper will wake at some new noise or lack of noise. (EW was able to sleep through minor noises or changes and only woke up when something was really different and when I might need his help. Points and more sleep to EW for that.)

When the movie first came out, our dear friends, fellow cruisers, and live-aboards, John and Dora, went to see it. John couldn’t get past how quickly “Our Man” cut the only stay holding the mast to the boat. EW wants a knife like that. John wants to make sure his stays are stronger than “Our Man’s” were. Both keep the bolt cutters where they are easily accessible in emergencies. After viewing the film, I Googled “All at Sea Sailing Mistakes” and found this fun and very detailed post on Sailfeed. While I have no quibble with “Our Man’s” background and motivation (or lack thereof), I also had no idea how he had made it so far without mishap.

Every time he went up the companionway in a huge storm, he lifted the kick boards---and he didn’t put them back or slide the hatch closed! I yelled at him for this. (Quietly, because I knew he couldn’t hear me.) I also had trouble with how messy the boat was before the impact. We lived aboard for 8 years in Maine and in the summer our living space was more clutter-free at the dock than “Our Man’s space was while crossing an ocean. Things happen at sea, and even little things can knock stuff over. You bring something out, use it and put it away immediately. His cluttered counters drove me crazy.

When the movie was first out, the Portland Press Herald, our home paper, invited six sailors to the theater for a sailors’ review. These guys may have a combined sailing experience of 242 years, but they aren’t snarky enough to review this movie properly. They seemed to critique what “Our Man” (or Robert Redford) had done, and ignored what “Our Sailing Consultant” didn’t do. “Our Sailing Consultant” is a figment of my imagination. Evidently they didn’t use one. It shows. At the very least I want “Our Man” to have packed a ditch bag as I just can’t get over that.

We had advised our non-sailing family not to watch the movie before we crossed, so they wouldn’t worry more about us. I’m not sure it would have drawn them to the theaters anyway. Certainly the danger is real; my two biggest fears are 1. EW falling overboard, and 2. La Luna hitting a container. We know of at least one Caribbean cruising couple who lost their boat in that fashion, and I do not want to make light of what happened to them and to “Our Man”. You cannot see a container on a dark night in a dark sea. Along those lines, I chuckled at the “reverse” product placement showing a loaded Maresk container ship passing very close to the shipwrecked sailor, with those on watch oblivious to numerous emergency flares. Bet Maresk really loved that. Not.

So we watched the movie, talked and ridiculed the writer, ate our pizza and didn’t let ourselves get caught up in the acting or the drama. Which is probably unfortunate. We knew “Our Man” lived at least until he could write the good-bye note, so we knew he’d live when he fell overboard – (twice!), experienced a 360 the wrong way, and endured yet another storm while in the life raft. That 360 – when the boat capsized and righted itself – was cool to watch. Unfortunately, I had already dis-engaged to the point that I didn’t even care about him or the boat. It was just a cool special effect.

It’s a shame, really. Robert Redford is an excellent actor, deserving of awards and accolades, and of working with expert sailing consultant. Too bad he didn’t have one. 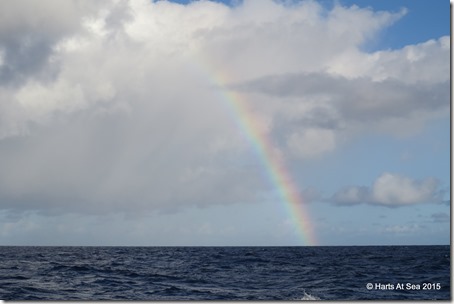 I'm afraid I can't even praise his acting, Barbara. It seemed to be underplayed for the sake of underplay. If I had woken with water pouring into the boat as he did, I'd have done perhaps something just a tad more expressive than observe it dispassionately! Windows would have shattered from my shriek just before launching myself into instant action! In the movie that was the moment of my first eye roll. Generally I'm a huge fan of Mr. Redford, but couldn't get behind this film at all.