On a boat, “Urgent and Important” tasks are those that jump up and down and say, “Fix me! Fix me! Or you won’t be able to sail/run the engine/pump the head/keep yourself from sinking.” “Important” but not Urgent  tasks may nor may not be more fun/creative/satisfying, but they need to be done, sometimes only so they don’t become Urgent. Important tasks can be ugly such as servicing the head or the engine, or creative like making new cushion covers or curtains, or both ugly and creative such as varnishing teak or cleaning the oven.

This month, EW and I have taken the time to set aside some of the Urgent and Important items to work on those that are Important. I’m still working on getting the laptop up and running, and I still had to submit our taxes to the IRS, but it was time to take a break from the corner office; similarly, EW is somewhat patiently waiting for the new jib, and will have to go up the mast soon to attach the new mid-stay, and his Urgent and Important things are still calling, “Me! Me! Me!”– but this past weekend, we started moving away from Urgent and Important, to the Important.

And we found that working on Important is much more empowering. Even if it’s drudgery, such as cleaning the oven. (Cleaning the oven is only urgent if it lights on fire due to the mess. That hasn't happened to me in a long time.) 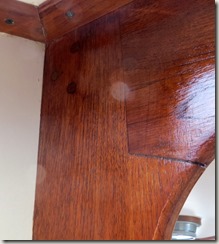 EW chose to start The Varnish Job. This will be a Big Important Job as pretty much the whole interior needs to be brought to life. La Luna will be 30 years old this year; she deserves to be babied. I’ve been dreading this job, thinking we’d have to move off in order to sand and strip the wood, but EW has been thinking about it, evaluating the wood, and identifying the problem areas. He wisely opted to work on problems areas first, in little bites. A week ago he began his first project: the forward head, with just a bit of Project Creep to include the hatch surround just outside the head, and he has since expanded the job to include the dining table and a small shelf along the back of the dinette.

There will be more discussion about some aspects of this job as we go along, but let me pause to reveal his superior project segmenting idea. Some teak areas, such as the hatch surrounds, and the dining table, will need to be varnished with poly that provides UV protection. Other areas, such as interior trim and the teak cabinets will not need to be stripped and will receive satin varnish. (This may change as EW learned of and found a satin poly that has UV – something he didn’t know existed.) In any case, the special areas that will need stripping and UV poly can each be easily tackled in a few days. The plan is to identify such areas and work on a few at a time at a time, sandwiching in Urgent and Important tasks, such as moving the boat to the San Blas before hurricane season, and saving the cabinetry for later.

I have  a lot of writing to do, and need to tackle a number of on-line Urgent and Important tasks while we have Wi-Fi, so while sewing is on my list, I’m waiting until we are settled for hurricane season to begin major projects. Still, I have a long list of Important To-Do’s and this weekend I opted to clean the stove and oven. We each assembled our tools and protected the surrounding areas, and EW put on some tunes, choosing to play our rather extensive “60’s Mix.”

As EW stripped and sanded the teak, and as I disassembled the stove top and began to clean, we listened to Chuck Berry, Patsy Cline, Duane Eddy, the Everly Brothers, a

number of Motown acts, Elvis, and the 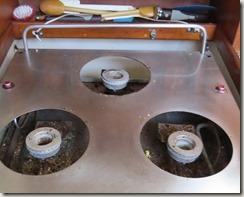 early Beatles. The Beatles were followed by early Dylan, then more Beatles, who were followed by Peter Paul and Mary. And then I was delighted to hear The Monkees. It should surprise no one that I could sing along with the Beatles and the Monkees, while EW knows nearly every Bob Dylan Song.

And that’s how it went: the scritch of sand paper, the scrub of a good brush on stainless steel, and our off-key rendition of “When I’m 64”; or me dancing and singing, “Then I saw her face. Now I’m a believer.”  Peter Bonta, our friend, EW’s guitar mentor, and excellent musician, has said that he has a lot of respect for Michael Nesmith, and I reminded EW of this as I sang along with the Monkees. Of course, I didn’t remember every song, and a couple of lines surprised me. In particular one segment from “She” (written by Michael Dewolf, David Gavurin, Stephen Richards, Jarrod Montague, Philip Lipscomb, and Harriet Wheeler.)

And now I know just why she
Keeps me hangin' 'round.
She needs someone to walk on,
So her feet don't touch the ground.

So we worked and we sang along with more of the Beatles, and a lot more Dylan, and Tom Rush, and Booker T and the MGs, and Joni Mitchell; and we laughed and he made fun of “Bubblegum music” and I told him Dylan couldn’t carry a tune in a bucket but that his lyrics were poetry; and we did good work. Important work. Work that wasn’t required because something broke, but because we love the boat.

It was a good day.

We have the same stove/oven. What do/did you use to make it so sparkling clean? Inquiring minds would love to know!