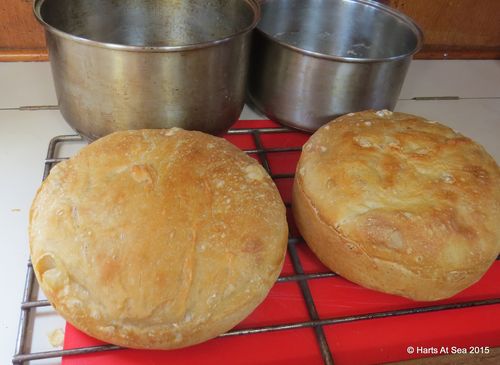 To continue with “Facebook Recipes”, as you may have noticed if you read the post about general cleaners, I have an aversion to reposting recipes on Facebook when I or my friends haven’t first tried them. If I like the look of a recipe, I’ll save it as a Word document to try (or not) later. The challenge with that is by the time I’ve tried a recipe, I have no patience to find the source in order to re-post it.

My experience with artisan bread was a bit different. In the French islands, we eat baguettes – lots of baguettes; in the Azores we purchased the local artisan bread; during crossings and passages and in many anchorages, I make bread. For years I used the “Easy White Bread” from Kay Pastorious “Cruising Cuisine”. We liked it. It was easy. It was fine.

But we loved the artisan bread in the Azores and “Easy White Bread” no longer did it for us. Lo and behold, during one of my very infrequent times on Facebook while in the Azores, someone re-posted a recipe for Artisan Bread that could be “made” in only five minutes. (Turns out there are many versions of this recipe on line. Here’s the one I found for this post.)

Five minutes? Yeah, right. And, the recipe showed wonderful enameled Dutch oven unlike anything I have on board. But it looked interesting, so I copied an saved the recipe for future consideration. A while after that, I remembered another bread recipe, posted on a cruising blog by someone who I know and who actually made the bread. Like my mother and sister, I save recipes, though more and more are saved in a Word document on the laptop than in my three (yes, three!) three ring binders on board.

So I went back to the laptop, and easily found my copy of a recipe shared by Mike of  S/V Happy Times.  We met Mike, his wife Cheryl, and their daughter Mikayla in Isles des Saintes, Guadeloupe, and later spent time with them in Grenada. Cheryl said that bread was very good, and Mike said it was easy. Maybe this Facebook recipe has something going for it.

So I tried it.

Oh. My. Goodness! Cheryl was right. (Cheryl is pretty much always right.)  While folks on the web will all say “5 Minute” bread recipe, Mike makes no such untruthful claim. Active time takes maybe 15 minutes, spread out over 9 hours, so this is not a time consuming process. It does require a hot oven and therefore quite a bit of propane, but I get around that by making two loaves at the same time. The second loaf will certainly last better than an extra French baguette.

Now, it’s interesting to note (for me, anyway) that I didn’t have the kind of dish Mike used, either. I have a Revere Ware copper bottomed Dutch Oven and I have Fagor nesting cookware that we purchased at a boat show in 2002. At first, I made one loaf at a time in the Dutch oven. That worked great, except for the propane issue. So I experimented with making two loaves at a time with my largest and second largest Fagor pots. Since those pots have holes to vent steam, I cover the lids with aluminum foil to keep the heat in. Mike says to oil the pans, the other recipe I got off Facebook said not to oil the pans. Two recipes I found when researching for this post, suggested using parchment paper in the bottom of the pan.

Cover bowl with towel and let rise for 12 to 24 hours. 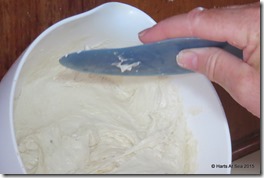 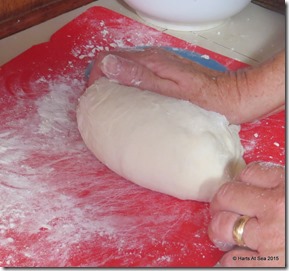 Fold dough over itself a few times.

Pour dough into heated dish. Cover and bake for 30 minutes.

Uncover dish and bake for an additional 15 minutes. Bread should get to 190-200 degrees F.

I tend to make this after supper, and let it sit overnight. I found that the “fold dough over itself a few times” can be a bit sticky, but the results are worth it. The blue soft kitchen scraper is perfect for this job. Finally, I haven’t willingly purchased a “package of yeast” in the Caribbean as I much prefer the large foil wrapped packages found on shelves in the islands. Once on board, I put the whole package into an airtight container in the fridge, and use 1 tablespoon for the “package” called for.

We've made both types of bread. One advantage of the 5 minute bread is being able to store the dough in the refrigerator (for a week or more). This enables you to cut off a small piece to make fresh dinner rolls, or pizza crust/focaccia or flat breads that can be done on the stovetop like naan or pita.
A disadvantage of both recipes is to your GIRTH! How can flour, salt, yeast and water taste sooo good?
This is the recipe that we use: (makes 1 "dutch oven loaf" or multiple smaller breads)
PLAIN
1 cup Water
1 tsp Yeast
1 tsp Salt
1/4 cup Sourdough Starter (optional)
2 1/2 cups Flour
Mix together in a 8 cup container. Let rise for about 2 hours. Refrigerate at least 2 hours. To use for smaller breads - while "pouring" out of the container, snip off portions with a sissor. Handle gently and as little as possible, no kneading, no beating down.
VARIATIONS
RYE - Substitute 1 cup Rye Flour for 1 cup Flour and add 1 tsp Caraway Seeds
HERB - Plain recipe + 1 small minced Onion, 1 tsp crushed Rosemary, 1/2 tsp Dillweed
GARLIC OREGANO (for Focaccia or Pizza Crust) - Plain recipe + 1/4 tsp Garlic Powder, 1 tsp dried Oregano

Thanks, George! Though I'm not sure I need yet another bread recipe due to that girth thing you mentioned, this looks great!