Yet Another Dinghy Key Issue 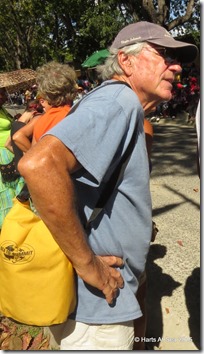 Oh man. Did I ever get in trouble after the parade in Guadeloupe!  We opted not to take a backpack because we just didn’t want to carry a lot of stuff. I had a dry bag on a shoulder strap, with the camera, hand cleanser, sun screen, and bug spray – and the dinghy key.

You know about dinghy keys, right? It’s that little plastic u-shaped thing that allows you to start your engine, and (if you attach it to your person while driving) will pull out and turn the engine off if you fall over-board. In Maine, the dinghy key was always in the dinghy attached to the engine. Once we started cruising, we removed the key to help prevent theft. I pretty much always forgot to use the key and would have problems starting the motor since it won’t start unless something such as the little u-shaped thing holds the button out to allow spark to happen. (I’m guessing about spark. I know that button in, no vroom; button pulled out from the motor, vroom.

(See previous posts about the dinghy key, here, and here,  If this continues I’ll have to create a separate category.)

So, you know what happened, right? Evidently, when I took the camera out of the dry bag, the key came too, and I lost it somewhere along the parade route. Of course, I didn’t realize it until we were in the bus on the way back to Gosier. To say EW wasn’t happy would be an understatement. We weren’t totally recovered from the Endurance Crossing and it was a toss-up as to which one of us could find our sense of humor on any given day. When I announced I’d lost the key, EW lost his sense of humor.

Unfortunately, (or fortunately) depending on how you feel about things, while I was much chagrinned, my sense of humor – and my unwavering faith that things would be just fine --- prevailed. EW was not happy, but I was chipper. Actually, EW was less happy because was chipper. “It’ll be OK,” I opined as my mind leapt from one possibility to another. “How will it be OK?” Mr. Grumpy asked. “The dinghy is locked with a padlock and we don’t have that key, and if we could get it unlocked we can’t start the engine! None of our friends are with us, we don’t have a marine radio and we didn’t bring the phone. Exactly how will this be OK?” 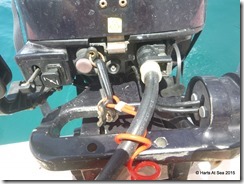 Yes, the dinghy was padlocked to the dock, and yes, that meant we had no way home. In the past I’ve actually found myself without the plastic u-shape safety thingy and I know you don’t need that to run the motor. A small line, or the shoulder strap of one of my purses works just fine. Somehow EW didn’t seem to happy that I knew that. Plus, we had that steel cable/padlock issue to resolve. Since the last dinghy key issue (see first “here” above) both the safety key and the padlock keys were attached to the float and cord.

(At left, the new cord/safety key. The faded red button is held out by the u-shaped safety key. Which of course is different for each brand of motor, because why?)

I figured we’d first see if one of our friends was still in town, if not, we’d have to go to the police to find someone with bolt cutters to release us from the dock. We’d get home, but EW would still not be happy. I was truly repentant, but refused to be discouraged. I knew things would work out.

We got off the bus, and saw that ours was the only dinghy on the dock, therefore we were the only cruisers still on shore. Oh. Plan B? Before we trotted (or stomped) to the police station, we discovered Plan C. (Gosier is this lovely town with friendly people and this dock was used by the little ferries who take folks from the town to the Islet Du Gosier for the day. The last ferry was on the dock when we arrived, and the crew person was one I had chatted with often as he is one of few who speaks English. So we conveyed our issue, and jumped aboard. They took us to La Luna and waited while EW grabbed the bolt cutters and I grabbed the box of spare keys and two flashlights. We traveled to the islet for the last pick up of the day and back on the dock EW paid our 6 Euro plus nice tip for the round trip ride. 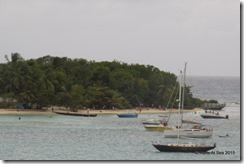 I found a key that fit the padlock on the second try and EW learned which of the two small lines in the boat work best for safety keys. He still wasn’t thrilled with me, but he couldn’t deny that things had worked out very, very well. (Truthfully, my chipperness had been  hiding some anxiety and  I was stunned by how well things had turned out.) I had really screwed up and definitely was extremely fortunate to get bailed out so easily. EW relaxed a bit, and forgave me totally. Though I better not do anything similar for quite some time. I’ve used up his patience when it comes to this damn dinghy key thing. 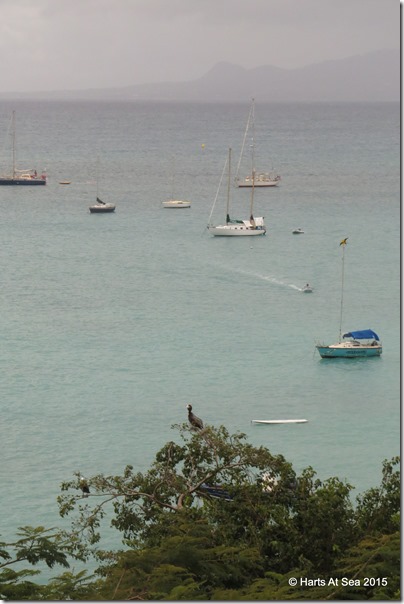 That’s La Luna on the top right, anchored in Islet du Gosier or at the little island off the town of Gosier. Gosier means Pelican. See the pelican in the tree at the bottom?

(And for you non-French speakers, Voila also disappointed us. Having heard the term expressed by real and literary magicians we thought it would translate into something more exciting than, “There you are.”

The French language is so disappointing.