We Are Coming to America

We were truly excited to leave Guadeloupe for many different reasons, but we were delighted to sail into Elephant Bay in St. Thomas for just one…we knew we were home. Neil Diamond’s song reverberated in my head:

But not without a star …

On the boats and on the planes

Never to look back again

EW and I  look back, and we’ll definitely visit foreign shores and islands again. But America is home, and we are proud to be American.

However,  just as I have done things of which I am not proud, I am not proud to be associated with every individual American all the time. (Don't get me started about the typical "ugly American" travelers I've seen during our travels. That's another topic.)

During our travels in the Azores, Canaries, and Guadeloupe, I often tried to keep up with news from home, but more often failed. All broadcasts were in Portuguese, Spanish, or French, and our time with Wi-Fi was limited. For this reason, many of the European sailors we met were more up-to-date on the news from the US than we were. Some of them were brave enough to ask gentle questions of us, trying to determine why we (as in Americans) “hated President Obama”, as more than one person phrased it.

Now, through the generosity of friends we are on a mooring in St. Thomas with a Choice internet box; and by virtue of being in St. Thomas, have access to news on the radio. That is 90% great, but within a few days of arriving:

Since we now “reside” in Florida, I no longer have the option to vote for Senator Collins and have no influence on the first two bullet points.

But what is my responsibility on the final one? One of our boating friends reposted this: 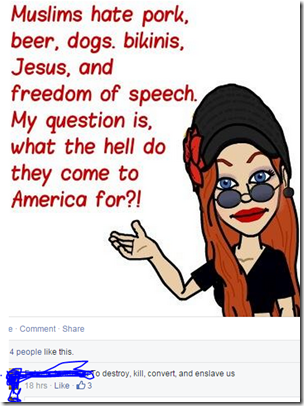 I was appalled. My first thought was to “unfriend” her, but I like her. We disagree on politics, but that doesn’t mean we disagree on everything, or that I haven’t learned something valuable from her posts or those of other strong conservatives.  My second thought was to comment, but I have seen those s#$t storms on Facebook and Twitter and did not want to start one. (NOTICE: Comments on this post will be welcomed from all parties,  but please remain respectful.) In the end, I simply “told” Facebook I didn’t want to see any posts from the person who was my friend’s source. However, I will share my intended comment here:   “I disparage hotdogs, have never worn a bikini, and my relationship with Jesus is not your business. I would say that Muslims come to America for the same freedom of speech and opportunities that enticed my ancestors and yours.”

My silence bothered me. There are many quotes from smart people--- including Abraham Lincoln, Martin Luther King, Jr., and Ginetta Sagan --- who all expressed that there is a time when it is not right to keep silent. Of the quotes I found, I think MLK’s is most appropriate for these times:  “We will have to repent in this generation not merely for the vitriolic words and actions of the bad people, but for the appalling silence of the good people.”

My friends are not bad people. (Even if I think the person who wrote the original FB post may be a bad person – and I’m pretty sure I have no use for the person who commented.) My friends have opinions they wish to share and have perhaps taken the easy way out by re-posting something that is bad. I’m not without blame. I have been vitriolic and spoken rashly and I have re-posted things better left unsaid. I hope someone holds me accountable for it. (I know that Eleanor, one of my friends, business colleagues, and office mates years ago did a great job during our conversations. We certainly rarely agreed about politics, but we were always true friends.)

I have been scornful of those elected officials and so-called journalists who cannot listen and learn and engage in conversations about various issues. I love listening to reasoned and learned “foes” who disagree.  But we need to remember, we aren’t “foes”. We are supposed to be on the same side. America’s side.  This morning, as all of this was spinning around in my caffeine-fueled brain, I listened to a conversation on NPR in which they were discussing that letter signed by 47 Republican Senators.

Two statements, made by two different participants resonated with me. (These quotes are not exactly accurate as I didn’t have a pen in time)

The first:  “We are falling down a slippery slope of name-calling and backbiting that makes it impossible to get things done.”

And later:  “If your first reaction on discussing the partisanship is to blame the other party, then you are not helping.”

I am proud to be an American. I will always be proud to be an American, even if I am not always proud of our leaders. I will not always remain silent. Friends in my timeline have posted ugly, nasty, hurtful things about individuals and groups. If you express those comments to me face-to-face, I will object – respectfully. Since I still don’t believe Facebook is the place for debate, I will not always respond openly on social media sites. But I will not remain silent. We are friends. We can disagree.  I will read your jokes, rejoice at your triumphs, cry when you are hurt, and learn from our differences of opinion whether they be about politics, economics, anchorages, food, or fashion. (Or the  Oxford Comma; of which, as you will note, I’m a fan.)

We are friends. We won’t always agree, and I will not always remain silent. In real life, I will object to hateful comments, and vote with my ballot and my pocketbook. In social media, I will respectfully reject and object to hate,  and --- if provoked ---will vote with the unfriend button.  In return, if I post or re-post hurtful, racist, or hateful comments, please call me out on it. This is not the time for silence. It is the time for conversation. It is time to remember that we purposefully friended each other and that every one of us is also proud to be an American. 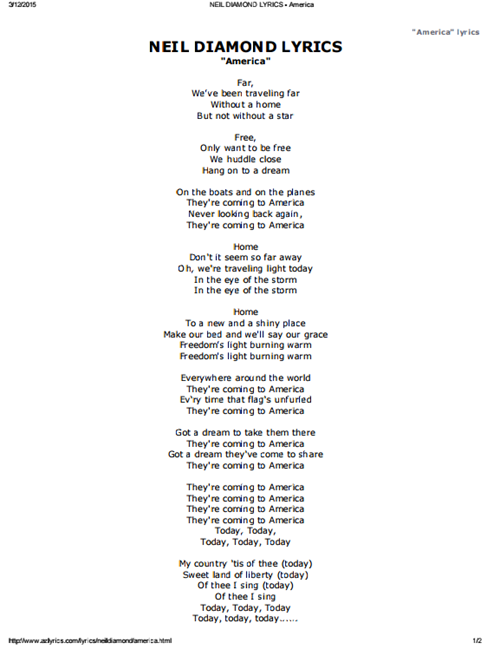 I take solace in the fact that it has been worse in America. In 1856 MA Senator Sumner made a 5 hour anti-slavery speech in the Senate. In the speech, Senator Sumner ridiculed specific Senators for their pro-slavery positions. After his speech, he was approached by a member of the House of Representatives who beat the Senator on the head with a heavy wooden walking stick, so hard that the stick shattered! Had their been F/B then, I'm sure we'd have quite a lot of sickening comments to sort through.

People are afraid and fear is a powerful emotion. Leadership has been lacking. But we'll get through this time. America always does. Welcome home.

Thank you, Matt -- for the welcome and for the perspective. It's good to travel and good to come "home". Stay warm, and keep doing good work in Maine. We need you.

We're also suffering from a swing towards insular nationalism in the UK, with a number of politicians stirring the pot, driven primarily by their own egos, self interest, and self promotion.

Its ugly to see, and drives a wedge between people who should celebrate their variety and differences and enjoy the breadth of experiences it can create.

As for the Oxford comma, I can only but agree, and viva la difference!

Thank you for writing such a nice post about a not so nice topic- and thank you for not unfriending me :-) I do understand your outlook and I waffle a lot myself, I used to take it as a sign of weakness- this waffling I do, but I realize it's an inner fight I have with myself. I feel so despratley that America is at a cross roads and so unsure of how to help it get back on track. I am feriously American but I don't want to be anti anyone as I do truly believe in the golden rule and would so love and rejoice if the world could literally "just all get along". Thank you for your friendship.

Beware re-entry. It's a b_tch!

I feel your heart weeping in this post, dear friend. You know that we're on opposite ends of the political spectrum but you also know my heart is one of kindness.

My roots are as a Kennedy Democrat. I voted for Carter and was extremely excited when he won. NPR and "All Things Considered" were my favorites.

Then, almost everything Reagan said made sense to me.

What troubles me is what I see as an ideological agenda to erode the foundations of the very song that you posted. This agenda is driven by the progressive philosophy that is deeply routed in our unions, our bureaucracy, our education system and both political parties.

Doesn't it bother you that our kids can't sing Christmas songs at school concerts?

Doesn't it bother you that most government workers get paid more than the average worker...and can't easily be fired for even the worst type of behavior?

I respect the offices of our elected officials and I do not hate the people who occupy those offices. I do, however, vehemently disagree with many of their actions, beliefs and practices. On both sides.

Hi George -- thank you for the digital hugs and thoughtful comment. You know I love you. We don't agree on much politically, but some of those things do bother me. We probably don't agree on the fixes, either. That's OK. I know you are a loving, kind, talented, and funny guy. I just think it's time all of us (and I am SO not without wrong here) work to not be personal or nasty. Nasty begets nasty and the whole thing rolls down a steep hill gathering speed and gathering garbage, and gaining momentum. We nice people need to stop feeding the garbage ball. Doesn't mean we need to stop promoting our views. You know what I'm saying ... "The medium is the message". Too often lately the medium is hate. We are all better than that. On another note, I was so delighted to be near Wi-Fi when Brandon got married. What else is new? What did I miss? Love and hugs, Barb

You are a good woman, Barbara Hart. As an expat American living in Australia and about to embark on live aboard cruising in Turkey, I thank you for that post.

How does an illegal immigrant gets social security , without paying into the system ?.... How does an illegally immigrant qualifies for EITC if he or she has but paid taxes ?
The naked hatred and disrespect shown to this president by the Republican Party is unprecedented !! Who would have thought that senators would invite a foreign leader ( no matter who ) to stand in the halls of congress to bash an American presidents international negotiations ?
Who would have thought 47 American senators would write a letter to a foreign leader , seeking to undermine an American president ?