Now in the meantime, EW had come up with ways to help the motor work for a bit longer than 20 minutes. And, because he’s sick of dealing with this motor, he has instituted new protocols that we are to uphold forever and ever. 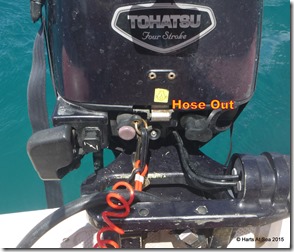 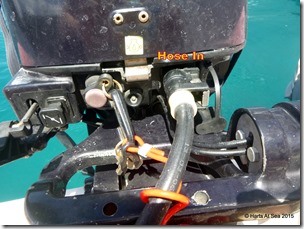 OK. That last one isn’t real. But for the impatient person on board who likes to jump and go, this is a bit laborious. Get in the dinghy, put the safety key in, remove the cover to the gas nozzle, install the gas hose, loosen the vent on the tank, start the motor and untie the boat. If you have forgotten to unlock the boat, turn the motor off, remove the safety key, and use the attached padlock key to unlock the boat. Do this within 2 minutes or you’ll have to remove the hose and …. well you know.

So this worked great the first three weeks we were in Guadeloupe. We were recovering, the boat was recovering, and I mostly remembered all the steps. At times I (and once EW) would forget to attach the fuel hose to the motor. We learned just how far we could go on the residual fuel in the motor before pfffft. (This still happens to me – or more appropriately, I still cause this to happen to me.) 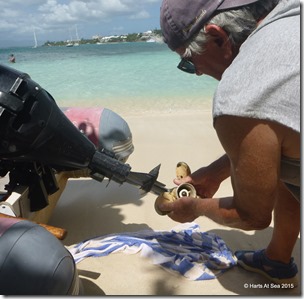 We had moved La Luna to the beautiful Islet du Gosier, where one day the motor stopped pushing the dinghy with any power. Just like that. Fortunately for our marriage, EW was driving the boat at the time. (Big huge sigh of relief.) He (and I) assumed that it was more of the same old same old, but when he mentioned it one night aboard the S/V Triumph Bill suggested that the issue was the propeller.

“But of course!” said EW his best Inspector Clouseau voice. (Living on a French Island brings out the Pink Panther in EW.)

He ordered a new propeller. When it came it, we rowed to the Islet, hauled the dinghy up on the beach, and EW installed the new propeller. Still , we continue with the new protocol when we are leaving the dinghy “for a while”. I’d complain, but she hasn’t stopped working and really, the person who doesn’t fix things doesn’t have a leg to stand on if the dinghy keeps working.

Patience is a virtue.

It’s just not my virtue. 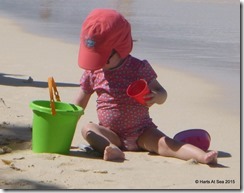 Cruisers fix things on the beach. 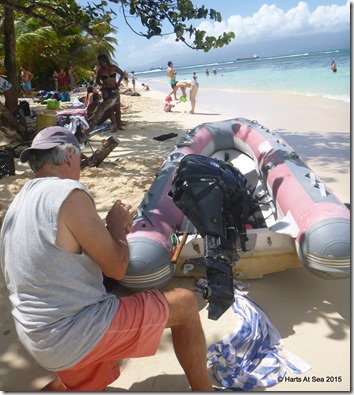