Let’s travel back in time. Now that I have the new laptop up and running and can once again edit and upload photos, you deserve a bit about Carnival in Guadeloupe. 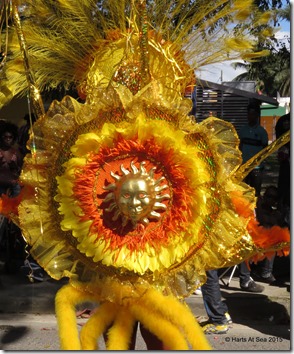 We had been told that the parade in Pointe-a-Pitre would be one of the longest in the Caribbean with over 70 different groups marching. Some boaters opted to anchor near the city, but we like Islet du Gosier and didn’t want to move, so early that week EW and I visited the office of tourism there. Unlike the larger tourism office in Pointe-a-Pitre, the one is Gosier was welcoming, and staffed by people who spoke English. In fact, on our mission to find out about Carnival, the young man spoke the Queens English with a delightfully posh accent. (Go ahead, say “Delightfully posh accent” in one. You know you want to.) 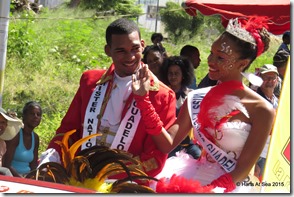 Our first question was whether the normal buses operated on Sunday. He regretfully told us that they did not. “Oh, we wanted to go to Carnival.” He brightened. “Ah. The buses don’t operate on Sundays, but they do have special runs for Carnival.” And he whipped out a schedule and list of stops for the holiday. These special bus for carnival caters to both  tourists and locals and included trips down to the resorts, normally off the bus route. Brilliant.

We spread the word among our cruising friends in the anchorage and were joined by 3 other couples, all heading to town early in order to choose a good spot. None of us brought chairs, but we found a good section of curbing and later in the day I found decent port-a-potties in Point-a-Pitre. 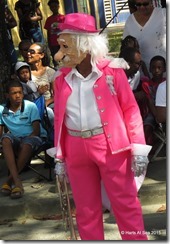 None of us lasted for the entire parade, though EW and I stayed the longest. Of course, it started late (Island time, man) and moved slowly as each group stopped periodically to perform their routine. We understand from other cruisers who watched from downtown that the parade went for miles to a red carpeted area where there were judges and multiple television cameras. These crews had a long day. Each one was followed by helpers who towed coolers of chilled water, and toted various items to repair costumes and shoes. 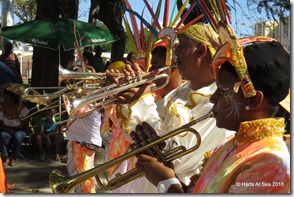 rarely featured recorded soca music. Most of the crews had percussion bands, some had brass instruments as well, and still others had a number of folks on conch shells. They also had crews that promoted social causes, and a number of groups in full masks, mostly gorilla masks. Many of those had whips they would wield with a very loud snap! Frankly, this was a bit disconcerting to us cruisers, but the locals took it in stride and a number of young children had their own whips. We never did learn much about the costumes, though one of our Franco-Canadian friends asked one of the local folk about it. The person wasn’t sure, but thought that masks were worn years ago to hide the identity of slaves who might be punished for participating. We aren’t sure if that is true, or why gorilla masks were chosen. 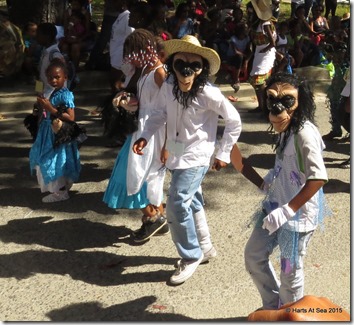 Like all Caribbean carnival parades, the costumes were remarkable, and the participants varied in age, body type, and skin color. There were girls on lead drums, lithe young men leading the dancing, and grandmothers shaking their booty (and pretty much everything else). One group celebrated the booty with exaggerated stuffed gluteus maximi, to the enjoyment of all.

Once EW and I realized we weren’t going to make it to the end, we opted to walk backwards along the parade route so we could see more groups. The talk in the harbor the next day included a discussion of how long one had stayed, determined by how many groups we’d seen. We saw over 40 before leaving, over three hours after it started. I applaud anyone who lasted for the entire event, and would recommend that you visit Guadeloupe during carnival and attend this parade and BYO chairs. 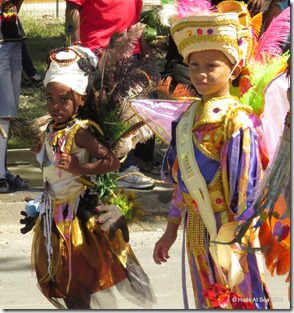 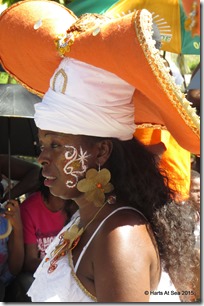 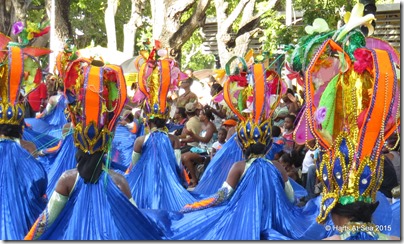 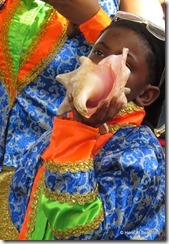 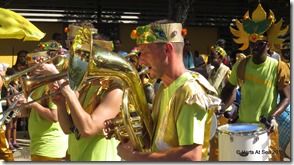 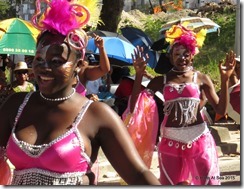