Home Archives Profile Subscribe
Cato, You Fool! Or -- The “Bimps” Along the Way
You Gotta Have Friends---Particularly When in Guadeloupe

We are in France,and since I’ve already  acted the Ugly American when re: conversing in AmeriFrench, I thought I’d jump in with both feet and discuss French Sailors and Anchoring.

We who cruise internationally make light of French sailors and their proclivity of  anchoring very close to other boats. If  there is a large anchorage with a few boats and lots of prime open space, odds are that the French sailor will anchor well within another boat’s safe zone. An international group of sailors who befriended us in the Canaries mentioned that all through the Med, Turkey, and Croatia, they prepared to defend their small circle of territory  when ever any French boat entered the harbor. This is even acknowledged when self-aware French sailors discuss anchoring. In a recent conversation, one Canadian cruiser said that she had to repress a laugh when a friend from France complained about someone anchoring too close to her boat. The French woman caught the Canadian’s eye and had the grace to laugh first. The implication is that if a French sailor thinks you are too close –—you are most certainly to darn close!

We had a prime spot at the entrance to Marina Bas Du Fort, where we had a short and relatively chop-free dinghy ride to the marina and were often able get the marina’s Wi-Fi. Of course, this means that many  other boats try to anchor  in the same location. Some succeed where they shouldn’t.

One such boat was a nearly new catamaran with (of all things) a British flag and pink lettering. We returned from a trip ashore last week to find them anchored well inside La Luna’s zone of safety. As both boats were pointing in the same direction and there was no immediate danger, we wimped out and didn’t address the issue. The next morning, I popped up on deck to lower the dinghy and found the butt end of this cheeky catamaran, very close off La Luna’s stern. How close were they? I don’t think I could have swung the stern ladder down, but if I had, I could have used it to easily clamber aboard their pontoon. 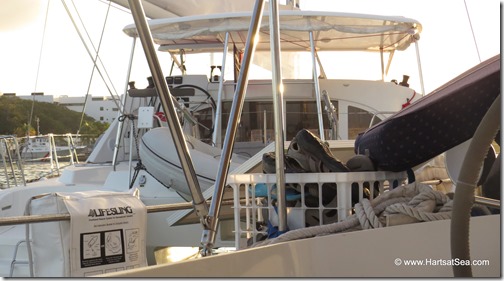 Catamarans swing differently than keeled mono-hulls and it’s the wise boat owner who takes that into consideration. I believe my exclamation roused our neighbor who arrived on deck about the same time EW did. At that point, the cat had finally started to swing and we no longer could have shown up for breakfast sans dinghy. They left shortly afterward, and we assumed/hoped they’d left the island

Also last week, a small sloop anchored well off our bow. The (also compact) young couple appeared to be that breed of practical French sailors who cheerfully and adroitly make their way on a small boat with few amenities. While I was off one morning rowing the dingy for exercise, EW had reason to go on deck and could not help but notice that sailing with few amenities requires one to sleep in the nude, and to hang over the stern for one’s morning business. EW was adamant about how much of the young woman he’d seen, but I was a tad skeptical.

Way back when we were dating, after the “I sail and all of my friends sail,” conversation, EW convinced me to take a Power Squadron safety and chart-plotting course. I was a naïve, twenty-something, and two slightly older young professional males also taking the course delighted in teasing me about 1) taking a course at the behest of my boyfriend, and 2) all of the things I would have to endure at sea. One of those things, they assured me, was hanging over the rail bottom-out in order to relieve myself. I was appalled and promptly called EW,  after class to let him know that was not an option.

Frankly, I didn’t really think it was an option for anyone, but those same Canadian cruisers mentioned above were well aware of this practice among French sailors. Sure enough, a few days later, I happened on deck to observe a tight compact behind, perched just so on the stern rail, as the lady on board did her morning thing. EUWWW!

So, the scene has been set. The small French boat left for a few days and returned to anchor closer to La Luna’s port side. EW watched them anchor, realized they were astute sailors who understood their boat, and decided that while they had unnecessarily positioned their boat within easy hailing distance, they weren’t close enough to cause problems. A few hours later, a large, new catamaran with pink lettering steamed into the anchorage. The cheeky Brits were back. Knowing their modus operandi, EW and I both sat on deck and stared at them while they tried to find a good spot, ignoring the wide open spaces just a few boats beyond.

The Brits wisely chose to avoid the La Luna zone, and instead anchored just ahead of the little French boat. That couple were on board doing boat projects in the hot Caribbean sun. The young gentleman was in cropped pants, a pink long-sleeved shirt, and a floppy hat. He had been concentrating on repairing his steering vane, and hadn’t seen the Brits anchor. They had scooted below to change into fetching shore outfits and had just lowered their dinghy for a trek to the marina when our petite French captain walked up to the bow and asked them to move.

The burly Brit was reluctant to do so, and a discussion ensued. We couldn’t hear it, but all conversation stopped as the French captain planted both feet on his bow pulpit, leaned back against the forestay, crossed his arms, and simply stared at the Brits. Mrs. Britannica looked around the anchorage and suggested to Mr. B. that they move off to port a bit. He clearly wasn’t ready to declare this his own personal anchoring Waterloo, but abandoned the field of conflict and moved his boat.

We were  disappointed. We had been looking forward to the following morning when we imagined the Brits enjoying their tea and scones as a nubile young French female sat on her stern and took a dump, barely a meter aft  of the Brit’s raised dinghy.

Dang! That would have been so great! Ah well. In addition to how one says “You are welcome” in French (which get’s huge smiles here), this week I learned the following: 1) The French are different; 2) French sailors do have an anchoring zone of safety, it’s just smaller than ours; and 3) Those guys back in Maine 30 years ago were right. It is possible for a woman to “go” over the rail.

I am, of course, more likely speak French fluently than I am to bare my non-compact Anglo-Saxon butt in that fashion.

Wait, they're POOPING?!? Aye! No. Enjoyed these stories (minus the poo visuals) :)

The local watering spot for sailors decided to have a Halloween party with costumes necessary for entry. An Englishman came up to me dressed in a 3 corner hat and plastic cutless. Who are you, I asked. Admiral Horatio Hornblower he answered. A bit later an American came up to me wearing a red white and blue top hat. Who are you, I queried. Why, I'm Uncle Sam, says he. Then I was a little confused by the next fellow that was holding court in the middle of the room- dressed like any other sailor, but carrying an anchor. As he approached me, he immediately dropped the anchor next to my feet. I asked, who are you? to which he replied, I'm a Frenchman.