The Hermione Project and Other Crossing Groups 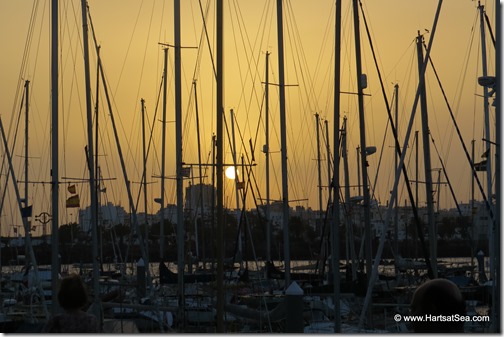 The Canary Islands, and to a lesser extent, the Cape Verdes islands are gathering points for folks crossing the Atlantic. This is a busy time in the marinas, and Marina Lanzarote was filling up as we left to return to Graciosa. Two weeks prior, the marina had allowed us to move to a dock where we could use the Honda generator, and where our neighbors were one workboat and ten or twelve local racing boats. After the sailboats left for a race back to the nearby island of 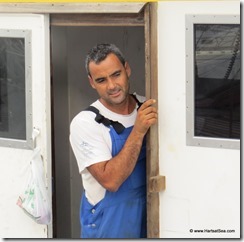 Fuerteventura, we shared the dock with Pablo, Marco and their crew as they worked on their new, second or third hand workboat. They’d purchased her from an Englishman. Pablo speaks fairly good English and is a delight – a diver, business owner, and racing sailor. He reminded me of Favorite, so after we became friends I did gently ask him whether he knew “about his boat’s name”.

He looked chagrined and said that he did. They will change her name to Tandem Alpha, to signify that two strong men own her. He and his crew didn’t mind the generator – and in fact they made more noise than we did, and we didn’t mind that. 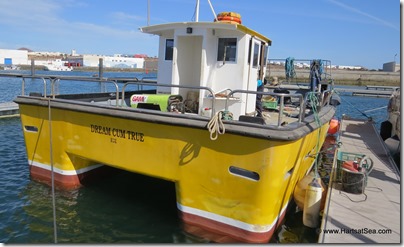 As the days progressed and the marina began to fill, more and more cruising boats joined us. One French gentleman asked why we ran the generator, but he was out near the end of the pier and assured us the two hours she ran in mid-day didn’t bother them at all. Over the next few days, more and more French boats were placed near us, one docking stern-to right across from us.

The first day they arrived, I went over and apologized for running the generator, explaining that our transformer had died and we had no choice but to run Jenny while we installed the solar panels. They were very forgiving, only asking whether we ran it at night. Upon assurance that Jenny would only be operated up to three hours a day between ten and four, we were forgiven. (It had been our experience in the Azores that the French were more disturbed by the use of the generator than any other nationality.)

Now that we were good neighbors, they told us that they were crossing the Atlantic in order to head up to Virginia for the Hermione Project. At least 20 boats from France  will join this replica of Lafayette’s ship and follow in her wake from Virginia to Lunenberg, Nova Scotia, stopping in New York, Boston, and Castine along the way. It sounds like a great thing to do, and certainly patriotic, but they won’t see much of Maine as their schedule is a little tight.

In addition to what EW and I called the “French Contingent”, other sailors from other Atlantic rallies filled the docks. There were folks participating in this year’s ARC, most of whom will leave directly from Lanzarote, while others will first stop in the Cape Verdes; and folks from Jimmy Cornell’s Odyssey – some just doing the Atlantic crossing, and others planning on joining his around the world odyssey. 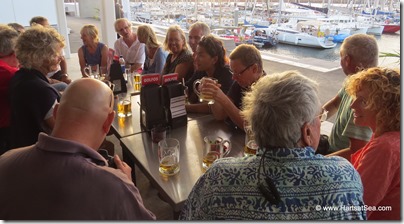 EW and I have no plans to join a formal rally, but were delighted to be asked to join the “Atlantic Crossing Group”. This Google Group of sailors was formed in 2013 by a couple sailing to the Caribbean who wanted to stay in touch and share ideas with others who were crossing. The folks we partied with three weeks ago in Graciosa all belong to this group. We were welcomed with open arms and made new friends from the US, Great Britain, New Zealand, Australia, Germany, Ireland, and Turkey. A number of them were very helpful during our double quest for solar power and butane. There are musicians in the group, and we took over one of the docks one evening for an impromptu jam session. This was our kind of group.

When I signed on, I noticed that the description calls us “over the hill” sailors. I both resembled and resented that remark and said so in a group posting. Now I have to come up with a new description. It’s that kind of group – do-it-yourselfers and delegators – our kind of people. While we truly enjoyed all the people we’ve met, my favorite new sailing friends are Lucy and Ben. I’m appalled that I have no photos of them. They are from Great Britain, and are good sailors, except they can be known to shed quite a bit. One of the boats from Great Britain have not one, but two Labrador Retrievers on board. Big, gentle, loving, tail-wagging labs. I fell in love. Their people,Jack and Fizzy,  are neat, too. 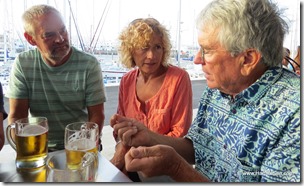 As always, EW and I will set our own course, point of departure, and destination – but we’ll keep in touch with our new friends via sailmail and SSB. Life is good at sea.

At left and above, a gathering of the members of our group who were at the marina. Other members were en route from Gibraltar or Morocco, anchored in Graciosa, or sailing in the Canaries or Cape Verdes. It’s an independent kind of group.

At the top of the post, looking from our “meeting” to boats on the dock at Marina Lanzarote.