First, a recap: We sailed from the Azores to the tiny island of Graciosa, arriving on the 10th of October.

November 4th (finally) we sailed back to Graciosa, with the intent of staying as long as possible before provisioning and taking off across the ocean.

November 17th, we sailed back to Marina Lanzarote, earlier than intended due to strong southerly winds. We stayed on the dock, provisioned, played tourist for just a bit, and left on the 21st, motoring south for two hours to get fuel, then motoring north back to Graciosa to fix a few things and prepare the boat for the crossing.

In the Canaries we sometimes struggled not to become “Ugly Americans”. And our impression is not fair to the Canaries, especially as we’ve only seen two of the islands. (Only one if you consider that Graciosa is part of Lanzarote.

First of all, we have not seen any canaries of the feathered variety. In fact, the Canary Island Group is named after the island that is now known as Gran Canaria, and that island was named by the Romans after the multitude of huge dogs roaming about. There’s even a statue of these large, black dogs in Gran Canaria. So, we weren’t in bird islands, we were in dog islands. This was ironic, as you will see.

Marina Lanzarote is on the northern end of the city of Arrecife, conveniently located near the marine stores, some excellent hardware stores, Antonio’s Solar business, the stainless steel company, and walking distance (once one knows the route) to four grocery stores, and IKEA -- of all things. To check into or out of  the country, one must take a taxi or walk over two miles to the cruise ship port, farther north.

We had arrived on a Friday, not in time to reach the Port Police, so we spent the weekend visiting with cruisers we had met in Graciosa, walking around our end of  town, and enjoying or avoiding the loud grand opening experience at the Marina and it’s somewhat more important shops and restaurants. (Including a Burger King. We cruisers began to call the place “Mall Lanzarote”, not in a good way.) During that weekend we experienced the electrical problems on the dock and blew our transformer. By Monday we knew that we’d be staying in the Marina to install solar panels, and finding things. 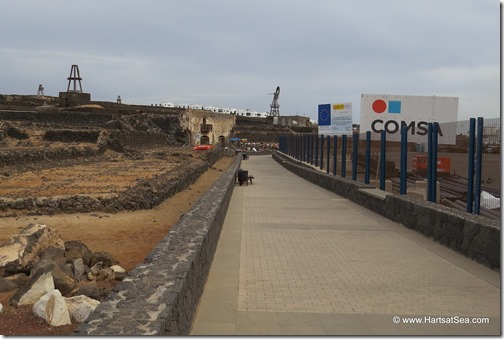 On Monday our tasks were to check into the country and get propane. As has been discussed, one proved to be ridiculously easy (especially since we were clearly illegal) and the other impossible. The walk to the cruise ship terminal was at times picturesque, but since there was no cruise ship in port, the lovely walkway ended at a locked gate, and we trudged through the dusty edges of an industrial park to reach the vehicle gate, which was open. 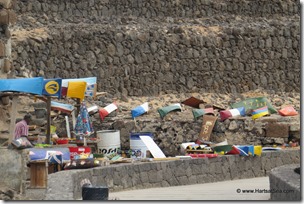 No issues. It’s all part of the adventure. (Note, the photo above and the one below left were the picturesque parts. Really.) We were declared legal, and headed to the road and the round-about. After asking directions, we reached a convenience store, about a mile from the cruise ship terminal, where one can exchange butane bottles from DISA, the local supplier. They do not fill tanks there, but the clerk nicely directed us to the factory –  located a half mile from the cruise ship terminal – in the other direction.

Still all part of the adventure. Reminded me a bit of getting propane in Hampton Virginia. Sort of. So we trekked back around the round-about, down the hill and toward the DISA factory, to be told in no uncertain terms (despite lack of language skills on both sides) that we would not be able to fill our tanks in the Canaries.

The adventure began to wane.

This island has no trees, except for the occasional ornamental Australian Pine and various palm trees along the sidewalks. The countryside is barren: rock, sand, and stone. For interest there are ruins of stone walls that had been around gardens or salt flats a hundred years ago.

We walked back, over the dirt road in the port industrial zone, to the lovely walkway created for cruise ship passengers, and then on a sidewalk in a shopping district at the edge of town. By then it was 2:00 and we had succeeded only in getting our passports stamped. After lunch, we set off for a shopping district that included the IKEA, two grocery stores, and I thought a lot of smaller shops. We had a list.

We had actually been at the doorway of the IKEA store during our morning trek., but couldn’t find it coming from the other direction in the afternoon. We ended up walking about a mile too far up hill,  stopped at a bar for sodas, and got directions sending us back down the hill and (ultimately) into a construction zone.

We were giddy. EW had reached 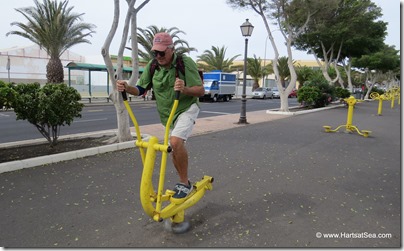 pissed off and gone to not giving a farthing (complete with faux British accent), taking him back to a good mood. As we waded in ankle high dust along a dirt road with a highway just to our left, past an old landfill toward IKEA (we could see the sign), EW said, “You know, if I lived on this island, I wouldn’t even own a dog. It wouldn’t be fair to the dog!” I cracked up. “Seriously,” he continued, “There’s nothing to sniff here!”

The resulting release of laughter and endorphins just made us laugh more when we realized that all of the small shops in the “shopping district” were closed for the day.   (Spanish shop hours are strange; some stores close for four hours in the middle of the day, others don’t open until 4:00 and still others close early in the day. We shopped in IKEA, where I was able to purchase three much needed kitchen items for under 10 Euro, and we were able to purchase about a third of our groceries next door. When we were done, a nice security guard at the store called a taxi for us, telling the dispatcher that the driver should look for “dos gringos” with groceries. (Above, the picturesque walk up the hill that took us too far for IKEA. Yes, I requested EW pose to show the exercise equipment. This is a cool idea. This park is a wide lane between a divided street. It’s brutally hot during the day, but one could jog or walk and stop for a workout in the morning or evening. That’s as green as Lanzarote gets.)

A bunch of British folk have retired here on purpose. There is a English language radio station, complete with ads letting you know that haggis and Christmas crackers are available for the holidays, an English language newspaper, and a surprising number of folks in the shops speaking the Queen’s English. I stood in line at a shop with one mother and daughter and asked if they were on vacation. “Oh no. We moved here.” Without thinking, I burst out, “Why?!” (There’s that Ugly American, again.)

All in all, we figured we walked eight miles during our first Monday in Arrecife. They were hard, dusty miles.

OK, this is pretty, It’s the lagoon in town. These small fishing vessels have a channel from the ocean, under two bridges to this harbor.

Still the Canary Islands aren’t our favorite destination. I’m sure in the future that if we aren’t enamored with a town or island,  we will say, “If I had to live here, I wouldn’t even own a dog.”

OH! The photo at the top of the page was taken when we motored past the small (only) town on Graciosa.