Powered by the Sun, Outfitting La Luna with Solar Panels 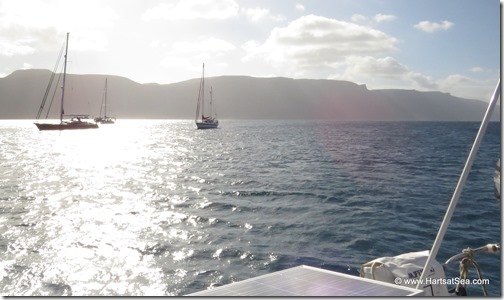 If we knew how easy this would be, we’d have installed solar panels years ago. What stopped us? We thought we really needed an arch over the stern in order to get enough power from the panels and having an arch built increased the cost by a whole bunch of lots (as cousin Jeff says).

Installing a simple arch would probably still be less expensive than installing a real transformer, and one of our main goals was to find a safe way to get power in at least some situations while on the dock. I think back on our time in the Azores when we had to tie up due to weather or harbor rules. Solar would have helped us in every port except Sao Jorge, where we went into the marina due to bad weather. There was no sun, and the high cliffs and break wall prevented gramps from performing. In every other marina we’ve visited on this trip, we could have generated enough power to forego the transformer. (And we did so on the last two days at Marina Lanzarote.)

Still, while we made the decision to go solar in the blink of an eye, we worried, fretted, asked questions of our new boating friends, and did a lot of on-line research.  John and Gill, on S/V Petronella, a lovely old ketch, don’t use as much power as we do (i.e they don’t have freezer) and they never plug in to the dock. I was greatly interested in that their solar panels are also attached to steel bars on the aft quarters of the boat – not high on an arch. John told us about his system and “introduced” us to HandyBob. We did our own research and relied on these  three blogs/websites: Handy Bob, Roads Less Traveled, and S/V Hotwire.

We had passed a solar office on our long, fruitless trek for butane, so we knew there was a provider who had provided panels for boats. Fortunately, while his office manager speaks no English, she was able to convey that Antonio, the owner, installer, and all-around good guy, would be in “a las quatro”. We visited Antonio many times “a las quatro” over the rest of the week. He was very patient. 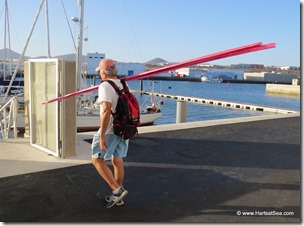 Antonio only sells two brands of panels, and only one in the size we wanted. We talked with other boaters, read the blogs and articles, and decided not to focus on the kind of panels – other than making sure they’d still work if part of the panel was shaded.   While we researched, EW met Manuel, a clerk at the Inox (stainless steel) shop, and we plotted, measured, purchased parts and rod, and EW quite easily installed the steel rod in place of the top lifeline. Both of us had thought that would be a much more labor intensive and much more expensive project than it had been. As soon as we were done, we went back to Antonio for the final purchase. (At left, EW and the 12-foot poles.)

We relied most on HandyBob and RoadsLessTraveled. RoadsLessTraveled actually made some of the mistakes HandyBob mentions when they first installed solar panels on their boat. They should have slogged through HandyBob’s posts. He’s a bit of a curmudgeon with an ax to grind, who has lived in a RV with his wife, traveling the US for many years, totally off the grid and rarely, if ever using a generator. He has little respect for those who sell and install solar systems in the RV market, and doesn’t care who knows it. Every article of his starts out with some version of “I know this is too long, deal with it.” Every article is too long, and every article rants about difficulties he or his friends have had with solar installers in the RV market. Reading HandyBob is a bit of a chore, but worth it; he provided good information and it was backed up by our friends on both sides of the Atlantic, and the other sources. 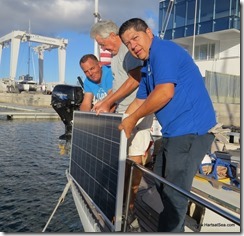 HandyBob foams at the mouth when installers insist and persist in using small cable; running long runs of cable and coiling the extra cable instead of cutting it, and using a less expensive controller. The result is poor output, encouraging folks to purchase more panels than they need. Antonio seemed to agree with all of this, and sells a brand of controllers made in Germany that seem to be very good. Unfortunately, he did not sell the more expensive model that allows us to set the battery charge point at 14.6. The installer Antonio sells comes with a pre-set of 14.4. It took a bit of convincing, but we managed to convey to Antonio that we would spend the extra 220EU (ouch) for the 45 amp controller that would allow us to set the system for our AGM batteries. He had to order it from the mainland and will get it to us while we are here at Graciosa. We expected we’d have to wait to use the solar panels, but he surprised us by loaning us the smaller controller until the proper one arrives. I love Antonio.

He and his crew came to the boat three times to make sure the welder attached the mounts to the right place. EW (bless his heart) cut the holes in the deck, did all the wiring, and walked miles seeking parts. The result: 14 days after we started the quest, we were living off the grid, cranking out power. When there is full sun, the wind generator stops working automatically, when we have a bit of a cloudy day, both solar and Gramps work to boost the batteries. (Above, Antonio, EW, and Fausto installing the starboard panel.) 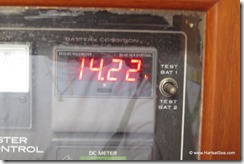 EW is tickled and obsessive. If I lose him, he can be found hunkered down on my side of the bed, reading the amps being produced by the solar panels. Cloud events are now known as “Cumulous Interruptus”, which sounds slightly nasty. Jenny, the Honda generator is now safely installed in her below deck home and we haven’t used her in 6 days. (At left, a sunny day in Graciosa. Woo-hoo!)

Some of the European boats have simple (read less expensive) arches, mainly used to hold their solar panels. When we do that, we’ll add another panel, and bigger wire from the panels to the controller because it will be a longer run. (We had trouble finding wire as big as we would like to use, but what we have is fine.) When we upgrade, we’ll install a 12 volt water heater element so that once the batteries are charged we can heat water. That idea came from our friends Keith and Jaime on S/V Kookaburra. They and I are now persona-non-grata with a number of men from Europe since I told their wives about the hot water option. Oops.

This post is too long. You’ll just have to deal with it. (HandyBob is contagious)

More photos from the project. 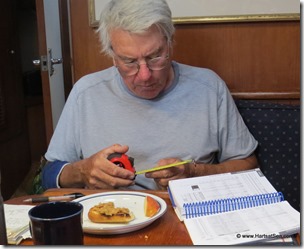 EW spent a lot of time learning about wire size in Europe, and using “Spanish for Cruisers” to plan his shopping trips each day. The book was invaluable to him. He had breakfast with it nearly every day.

First, he had to remove one wire holder from each side, cutting and filing the metal to allow him to attach the pipe holder. 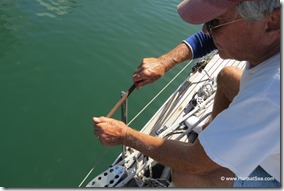 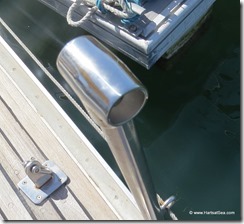 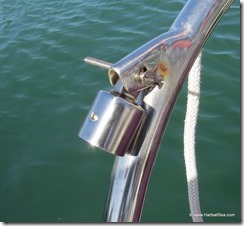 We were able to use the end attachments at right on both ends of the pipe. Once they were in place, we walked back up to the Inox place and purchased pipes cut to size. 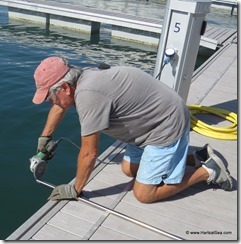 Sort of.  They were a tad long. Fortunately, when we had asked the marina to move us to a slip where we could run the generator without bothering folks, they put us next to Pablo and Marco who had recently purchased this workboat for their dive business. Pablo immediately offered EW a grinder and the cord to use it. For the win! 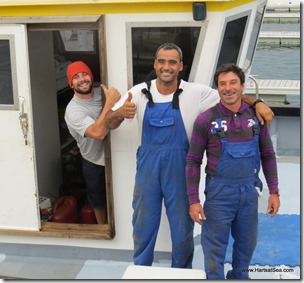 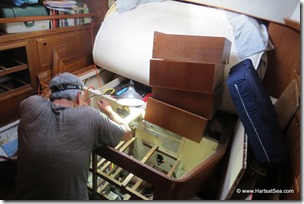 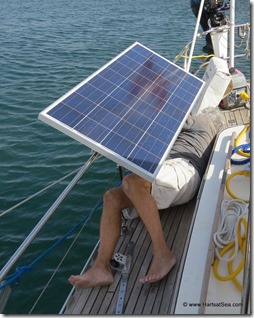 EW adjusting the slant on the panel for our time at the dock, where Gramps and the solar panels worked well together to provide us with power.

At the top of this post, a sunny day in Graciosa with solar panels cranking out juice. 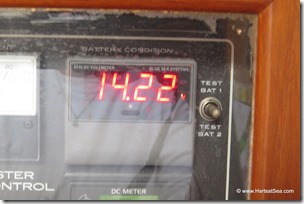 Moonset over Graciosa. Looks like a sunny day in the offing. If I can’t find EW, I’ll look for him back with his new best friend, the Steca Controller.

Good work on the solar thing. We've been all solar since 2011. You'll love it. Thde pix of the digital readout are all Voltage. How many Amps are you putting into your AGM batteries at high noon? our 4 panels totalling 440 Watts give us 22 amps.Love to you and EW from Silverheels III