Fortunately We Are On the Dock in Tenerife 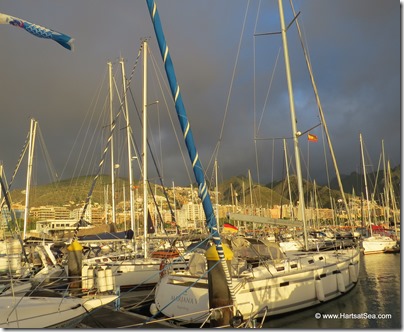 Unfortunately, we may be here longer than anticipated. The past four days have been interesting – mostly in a good way, and when not in exactly a “good” way we can resort to “Thank Goodness it Happened Here!”

Fortunately, we had a great sail for the first 24 hours from Graciosa, and we and our sailing friends (and extra weather support) believed that we had a shot of making our way west and south to beat the nasty front moving in.

Unfortunately, the front came early, and the winds shifted two days sooner than had been predicted by all sources. On Wednesday morning, we found ourselves beating north of Tenerife, which should have been a clue, especially when we had to tack to avoid getting too close to the island. Shortly after noon  I was able to get the day’s GRIB files and realized that we were skunked.

Fortunately, we were only 40 miles from Marina Santa Cruz in Tenerife.

Unfortunately, the wind and waves increased  immediately after we had tacked to our new course, and we found ourselves beating in 20-35 knot winds and 6-8 foot seas.

Fortunately, we main and jib were already reefed.

Unfortunately, Casey, the auto-pilot does not like (is not set up to like) handling a beat in strong seas, so we had to hand steer. EW took the first shift and I worried about being able to handle it when he tired. We had to prepare for 4-5 hours of this.

Fortunately, EW dumped the main (let out the mainsheet so that sail wasn’t pulling – much) and we were still able to sail at 5.5 – 6.5 knots though it was much easier to steer the boat. When my turn came, I held her just fine for over an hour and a half until we had gone far enough past the point of the island for the waves to diminish. At that point we used the autopilot again and tootled along for another hour or more. (It all runs together.) At some point I opened two cans of chili and served it up with butter bread. We felt better.

Unfortunately, we would have to motor the last 12 miles as we had not been able to hug the coast on the way south. We took in the jib and turned to the west in 40 knot gusts. The winds come off the mountains and do strange and amazing things in the Canaries.

Fortunately, we were close enough for cell coverage and I was able to call the marine before they closed at 1900 (7:00 PM) and confirm they had a slip.

Unfortunately, EW realized on our way in that the alternator wasn’t charging the batteries. We are once again on a European dock with no access to local power.

Fortunately, locals told us about Jose, the alternator expert who is amazing.

Unfortunately, he may not be able to find the needed part on the island.

Fortunately, all of our neighbors are OK with us using the generator in the afternoon because ..

Unfortunately, while we are in the midst of a storm and very glad not to be outside, there is no sun and the wind swings from 8 knots to over 30. The wind generator doesn’t charge the boat with fewer than 15 knots and it cuts out when the winds top 30.

Fortunately, all Spanish, French, and German sailors – most of whom hardly hear the generator over the wind – were very forgiving.

Even more fortunately, of the two boats we would bother most, one is not living aboard and we’ve already made friends with and broken bread with the captain and crew of the other boat. 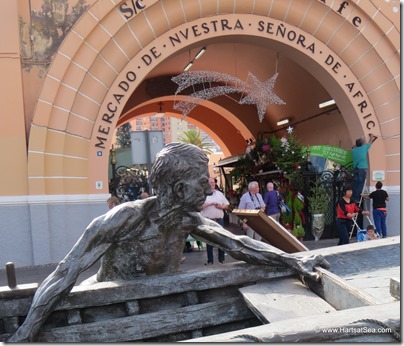 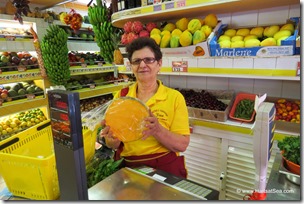 Most fortunately of all … on Thursday morning, I scooted to one of the most wonderful food markets we’ve seen and purchased everything needed to create a Thanksgiving for two: grande pollo, butterflied by the butcher, potatoes, squash, apples, fresh herbs, and white wine. I made a small feast, the first Thanksgiving I’ve commanded since the year we moved aboard. We shared two pieces of pie for Jose to take home to his wife, and invited our new best Irish friends, Kevin and Irene over for pie and wine after dinner. I’m going to keep feeding them because they are closest to the generator. 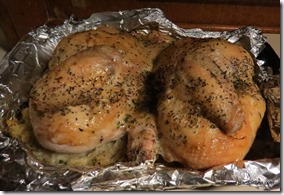 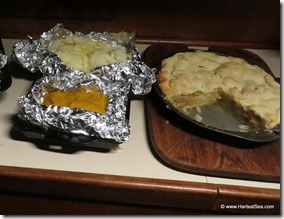 So on this day after Thanksgiving, I am grateful for many things: 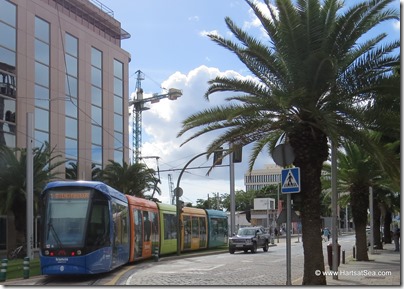 In the meantime, we wait to hear about the availability of parts, make new friends, and – once the weather clears – visit a bit of this island. This town has a tram! How cool is that?

POST SCRIPT: Yes, you will note that we have not moved the bed back. We thought it was too much work to remove the dinghy motor from the master stateroom, and move the mattress, and put it back in four days. We take turns. Last night I had the lovely sea bunk and EW had the settee. Tonight we swap. We occasionally meet each morning for a cuddle in the sea bunk. (Once again with the oversharing.)

POST-POST SCRIPT – Finally getting this up on Sunday morning here (0940 my time, 0440 your time). Storm, rain after the storm and spotty Wi-Fi as a result prevented getting on-line at the marina. The alternator is working perfectly. Jose is brilliant! We plan to leave for Guadeloupe on Tuesday, December 2. Today, we are sight-seeing in two cities (One just a tram ride away.). Won’t get to the mountains as they are horribly clouded over still. Next time. If we visit the Azores again as planned, we will head straight for Tenerife after Santa Maria –despite the ridiculous tax.