Farewell to the Canary Islands 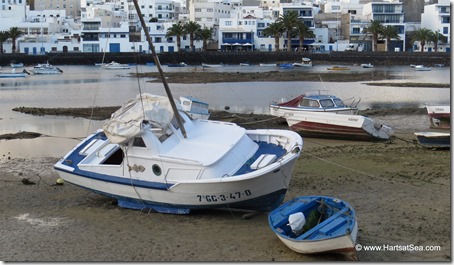 We haven’t loved  the Canary Islands, but we’ve met wonderful people, installed solar panels that are working, and have gotten things done on the boat. We’ve even played tourist a bit. Just a bit. Frankly, we didn’t give the Canaries a chance. At times I’m afraid we’ve been Ugly Americans; we were mostly focused on boat projects and finding parts; we stayed on the boat too much; by necessity we’ve stayed too long in a marina. It’s time to leave.

We had two lovely, quiet, productive weeks in Graciosa. We celebrated EW’s birthday with grilled Azorean steaks, lovely red wine, and cake. EW obsessed over the solar panels and their output, and there were too many hazy, cloudy days. Still, the panels and the wind generator kept up with most of our needs, and the dingy motor worked, so we could ride to town for Wi-Fi and light groceries.

While having this quiet, boat work, contemplative time in Graciosa, EW and I thought about our Atlantic Circle trip and ultimately decided that we didn’t want to sail to Brazil and Argentina, but would rather sail back to the Caribbean. Our plan is to visit some of the islands we haven’t explored, hang a few weeks in the Virgin Islands, and sail west to the San Blas for a while. There, we’ll join Jaime and Keith on S/V Kookaburra, Carrie and Carl on S/V Firefly, and perhaps some of our new friends from the Canaries. We don’t plan to go through the canal, but would be delighted to once again help other boats transit it. 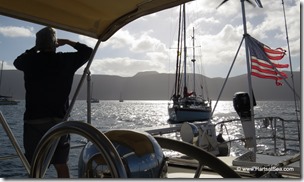 Which brings me to old friends. When we arrived back in Graciosa just before EW’s birthday, I noticed a seaworthy white boat with red trim and mentioned that she looked like a fine boat. After we anchored, EW realized that we knew that boat! She’s S/V Bear, formerly owned by Chuck and Diane, our neighbors at South Port. EW crossed with them from Tenerife to Antigua, and we both helped them transit the Panama Canal. 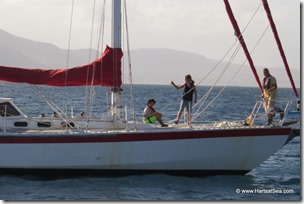 Now she’s owned by a family, also from the states, and we chatted with them as they were raising the anchor. (They had a lot of chain out and came close to our stern. All good -- the better to chat with them.) According to the woman on board, “Rust is the new black.”Bear looked happy , and ready for another adventure and yet another crossing. 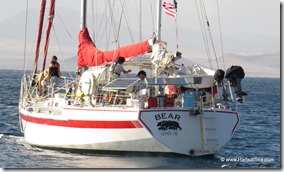 As are we. Sailing in the Canaries is better in the summer when the winds are more constant and less threatening. Like the Azores, there are few comfortable anchorages and none that are safe in a strong southerly. Strong southerlies were predicted for Wednesday of this week, so we joined the other sailboats in exiting the otherwise lovely anchorage. When we left, only 7 boats remained and most of them were getting ready to raise the anchor.  Since we had to go back to Lanzarote for final provisioning and to check out of the Canaries, and since we were now planning on crossing to the Caribbean, and since it’s just a matter of a week or so before yet another round of southerlies, we’ve decided to leave the Canaries.

As I write this, it’s Thursday, November 20th. EW has gone to check out of the marina so we can trek on over to the Port Police office and check out of the islands. We’ll get the veggies, fruits and other cold stuff on the way back, visit with dock mates this afternoon and evening, and leave the marina on Friday. Shhhh. Don’t tell the Port Police, but we’ll finish preparing the boat at Graciosa, and begin our crossing on Monday or Tuesday. As before, I’ll update the blog via our SSB and pactor modem. Though we told folks in our email list that we were sailing to Barbados, we might end up on St. Marten, or Guadeloupe.  Our first port of call may be up in the air, but we are definitely heading west.

It’s time. But that doesn’t mean we are done with the Azores. EW has agreed that we will make another Atlantic Circle in a couple of years. Who know where that will take us? Life is good at sea.