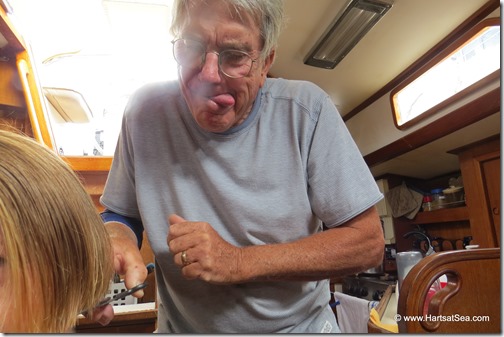 Does it make me a goose that I inveigled EW to cut my hair?

It takes the best hairstylists (like Darleen in Maine and LeeAnn at sea) a few cuts to learn about my hair. As we cruise the islands of the Atlantic I only give each professional one shot at it before moving on and getting another cut in six weeks or so.

Faithful readers will know that I have given EW two horrible cuts in years past, but he still agreed to let me try again and I’m now cutting his hair – and learning his cowlicks – to his satisfaction if not to perfection. After my last professional haircut in the Azores, I suggested that EW should take scissors in hand and save us some money. 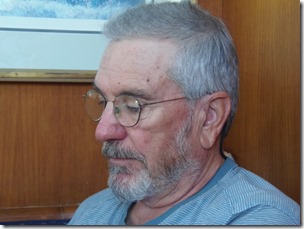 First, I had to seriously absolve him of all guilt if things went bad. (This is where the inveigling came in. I know that means “persuading someone to do something by means of deception or flattery”. Of course, you would have heard if I hated my haircut! Of course, you all would know that EW did it.) But, after all, I did this to him, so how much worse could he do to me?

I wet my hair, clipped it up in sections that could be lowered for cutting at the appropriate time, and arranged a crate and cushion salon chair in La Luna’s saloon.

We began. He has no idea how to cut hair, and I only have a little bit of knowledge (which can be a dangerous thing.

The rules were as follows: 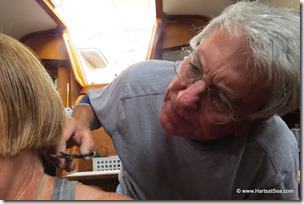 It went quite well. He actually offered me a mirror – which was both good and bad, I tried not to micro-manage (but it is my hair), and we kept our sense of humor. We learned what to do next time. It ended up much shorter than what I had wanted. (EW learned NOT to hold the strand of hair tight while cutting as it springs up afterward. About a half inch.) However, it isn’t shorter than the cut I had in St. Lucia, or when I asked LeeAnn to cut it short so I could go for 8 weeks without a cut.

I like it shorter and may keep it this way now that I’m living with my hairstylist. 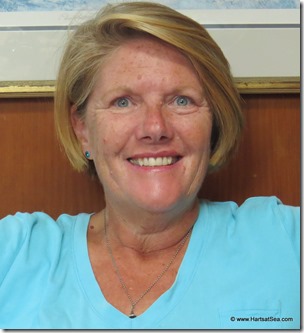 Afterward, I cut EW’s hair, giving him the mirror and I did better than the last time.

However, I look marvelous, don’t I?

Yeah Stew! Good for you! And good for you too Barb for being bold enough to inveigle and brave enough to follow through. (Although I am hoping that Ross doesn't get any ideas from this!)

hey you two, miss you all

Hmmmm. Ross does like to save money. I won't tell him about this, Diana! I had to talk EW into it. Now you'd think he was Vidal Sassoon. Men.

Just found your website. I'm so happy for you guys. And your book looks awesome. Can't wait to read it.

You are a much braver woman that I am! But he did a great job - your hair looks great! Cheers - Ellen