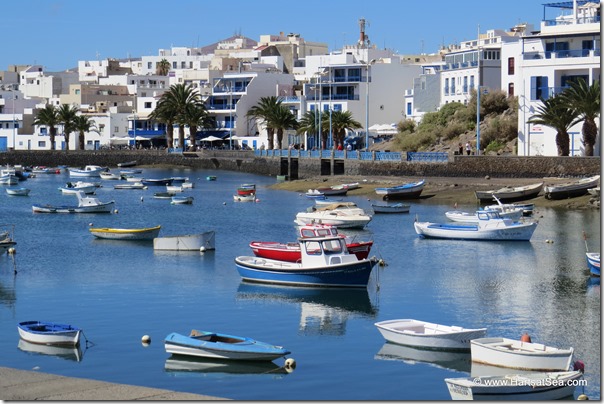 Let’s talk birthdays. A few nights ago there was a marvelous cruisers’ cockpit party with many musicians, great food, and stimulating conversation. I joined two of the ladies when they were discussing birthdays and ages. One is a few years younger than I, and one is three years older. Well, two years older as of today.

Anyway, one of them had received an email from a friend who opined that age and time are relative. The idea was that 365  days equaling a year is arbitrary. If a year were 450 days long, we would all be considerably younger.

I didn’t totally buy it then (as I remember something about the earth and the sun and some very finite revolutions in space) but it did sound good. If a year were 450 days long, I’d be just a tad over 47. For some reason that sounds way better than 58 (which is so close to 60!), but if a year were 450 days long, I wouldn’t right now be in the midst of an awesome birthday celebration.

We are docked at Marina Lanzarote in Arrecife, The Canary Islands. Marina Lanzarote is a new marina – or a newly improved marina complex. There are many new docks, a new office,  stores, a bakery, a restaurant, and more to come. Today, October 18, is their grand opening. I’m pretending it’s all for me.

EW woke early (having gone to bed early the night before) and I got up at eight. We had planned some major boat cleaning while on the dock and he was raring to go, so the first two hours of my birthday were spent cleaning the heads, the blasted companionway, the shower curtains, the cockpit, and the shower grate. EW scrubbed the decks and cabin top.

La Luna looks marvelous. Once we finished our assigned tasks, I took a much needed shower and trotted up to the newly opened Panzaria and purchased two fruit tarts and six tiny muffins for our late breakfast. There were many people already on shore, mostly locals, probably investors, owners, and officials and their families, on hand to celebrate the grand opening. They were very well-dressed and obviously not boaters (many spike heels on the ladies). 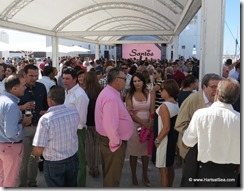 We had heard there was a “parade” at noon, so I told EW we had 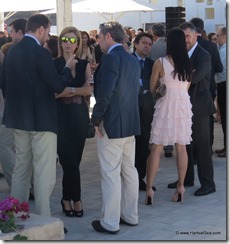 to get up there by 11:50. Of course the parade was late, but the officials were done with their speeches and on to beer, champagne, and little bites of food. Waiters went around offering all of the above to all present – including those of us not in suits, dresses, or heels. For. The. Win. 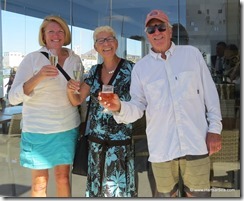 So at noon, my birthday celebration began with free champagne and little chocolate bites, followed by a very short but exuberant “parade’.  Then, EW, Helga, and I wandered into the shops. Helga is on the 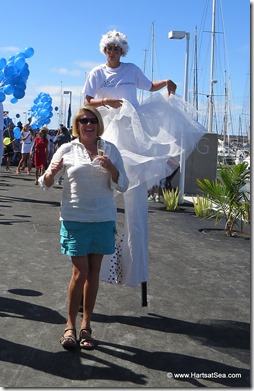 boat, Hash Papi, which did spend a few years in the Caribbean, where she says she met many wonderful cruisers. In January, they are going to Brazil – well Hans and two crew are going to Brazil. Helga will fly over after Hash Papi completes the crossing. 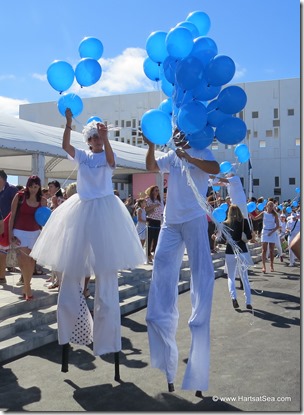 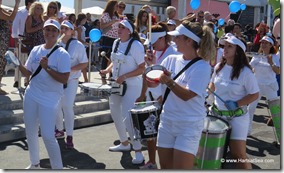 Afterward, EW and I had to go to the 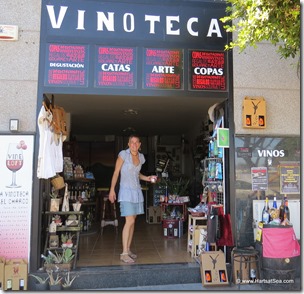 Supermarcado Grande today for a couple of things. Along the way, we found this wine store, and they offered us samples. Oh! Before that, there was free Heineken beer near the main stage at the marina. So we each took a glass. Then we found the Vinoteca, and  had samples of three different wines. (We bought two.) The lovely lady who owns the wine store directed to the Hiperdino supermarket, and told us where we should have lunch, just down the street from her store. 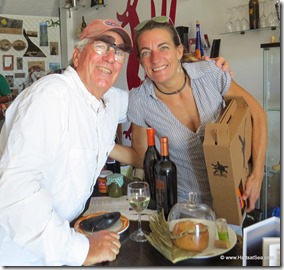 It was a long and late lunch, and the owner of the restaurant should have had a New York – perhaps Brooklyn  --accent. This is Spain. They invented tapas.

We kind of had our hearts set on various tapas and calamari. The owner seated us and asked us if we liked fish. We said we did. He mentioned a fish “especial” he was offering and we thanked him and perused the English portion of the menu, deciding on a potato tapas thing, gazpacho, and the calamari. When he returned for our order and we told him. He frowned. “I thought you said you liked fish!” We mentioned the calamari. “That isn’t FISH!” 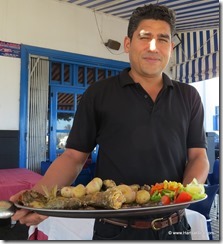 Again, he told us about the “especial” for two. Now you need to understand that this gentleman speaks only a bit more English than we speak Spanish. We knew that he had a platter for two for 31 Euro that included tuna, sardines, potatoes, salad, and other fish. We caved and ordered that with a bottle of white wine. (I’m not a Seinfeld fan, but I do know about the Soup Nazi. This guy was a Spanish Fish Nazi. But nice.) 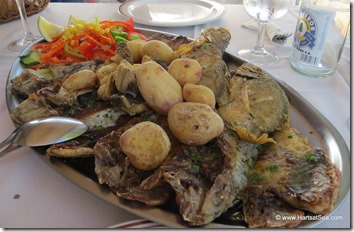 Oh. My. This meal had five different kinds of fish – all cooked to perfection – potatoes, a beautiful salad, bread, and the two sauces of the Canaries. What a meal. We couldn’t finish it and brought the rest home for lupper tomorrow. 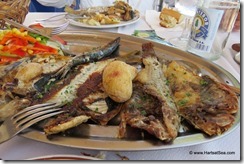 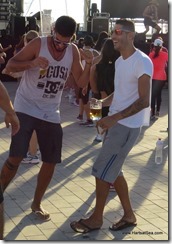 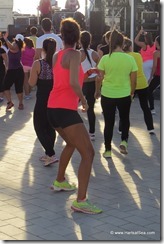 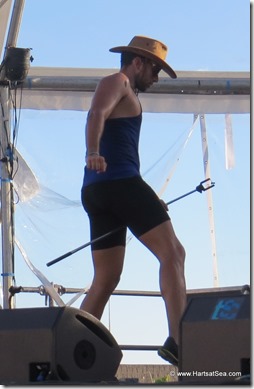 We wandered (slowly) back to the marina where the celebration included a Zumba “demonstration” which had enticed a number of local Zumba aficionados and some sailors to participate. (The sailors are the ones with the beer.) We watched. I have never seen Zumba led by men – particularly tall, handsome men – Zumba has not been my thing, but maybe I’d do better at his classes … 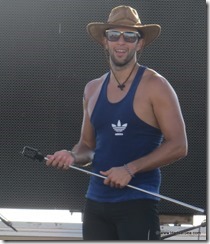 And yes, he rode that microphone stand as if it were a horse. The song called for it. (Happy birthday to me.)

So, it’s just before 7:00 PM here and we are resting on the boat. That means I’m writing this and EW is sleeping with his book in hand. Helga wants to have drinks later, and at 11 tonight there will be fireworks. 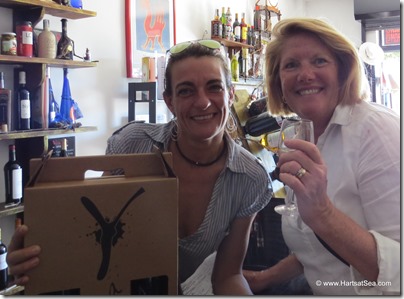 If only those stuck in the rat race new what they were missing!