To recap, we arrived on Friday night, we couldn’t check in over the weekend, we had a music night on Saturday, stayed on the boat on Sunday, and on Monday we finally went ashore. In the meantime, we met Gill and John, sailors from Britain who have a 40-year-old steel Joshua – the kind of boat sailed by Bernard Moitessier – who are sailing to the Caribbean after four years in Turkey. (Gill feels about Turkey as we do about the Azores. As members of the EU they get to stay in the country of their choice nearly indefinitely. This is not fair. But I digress.) 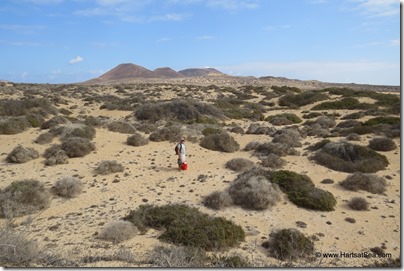 Gill had swum by the boat on Sunday and invited us for “nibbles” at six on Monday. Now that we had our social life taken care of, we had to get to town and check into Spain/the Canaries. This island is a natural park and there are only two settlements, and only one town. The other settlement just has homes and no services. 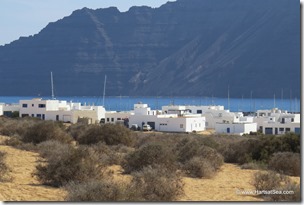 First of all, we can’t check in here and will have to go to Lanzarote. We have sent an inquiry for a reservation as they are often full due to all the boats getting ready to cross alone or in various groups, such as the ARC or the Odyssey. That done, we had lunch in one of the three cafes that have Wi-Fi, shopped for a few provisions, and talked with a tourist representative about things to do on the island. We were running later than I wanted, and the walk back was more arduous due to the heft of the provisions (wine and beer weigh more than lettuce and tomatoes), but we arrived at the boat at 4:00 with plenty of time to mix up another batch of cheese biscuits, chill them for an hour and bake them prior to rowing over to Petronella. Gill and John were great hosts, she had prepared a wonderful variety of “nibbles”, and we all decided to take a hike together the next morning, agreeing to turn on the VHF to channel 69 at 10:00. When we arrived back aboard La Luna, EW promptly entered an alarm in the iPad for 09:55.

The next morning, the iPad started whooping at 08:55. I’m not a fan of the iPad and I despise iTunes, so I was quick to discount the time discrepancy as a problem with the iPad. Both laptops and the ship’s clock told us it was just nine. Shortly afterward, we heard Gill hailing us from the bow of their boat, telling EW to please turn on the radio. I did so and hailed them on 69 – of course at that exact moment, EW and I realized that perhaps our journey from the Azores had taken us into a different time zone. The iPad, now known as the “Time God” was right. For three days, we’d been operating an hour behind everyone else.

Of course, that means we were very late for music night aboard Sephina on Saturday. (Something that wasn’t as apparent since they had other guests and we were essentially the “plus two”.) More appalling, we realized that when we had been the only guests on Petronella the night before, we had been an hour late! I am never an hour late. I am never sanguine about being late. I’m a nasty wreck when I’m late. Gill and John had ignored our breach of etiquette as only the British could/would do. (Even our Canadian friends would have said something, gently.) Of course, they had figured it out when we weren’t on the radio, but on the evening in question, they had looked over to our boat shortly after 6 and noticed that we were on-board, calmly going about our business (i.e. reading on deck while the cheese dough hardened), and actually assumed that they must have asked us to drinks and nibbles at 7.

This also explains why the store that stays open until 2 was closed when we stopped by shortly after 1 on Monday. I have no idea what time I called my sister, Pat, in Maine. No wonder her husband, Jerry suggested I give her a half hour and call back. I kind of wished Gill and John had been American or Australian. Either of those nationalities would have been more likely to at least synchronize watches before parting on Monday evening. On the radio Tuesday morning radio call, we agreed to pack lunches and meet ashore at 11:00. I made sure we arrived first, and we had a great hike, and a good laugh over the whole time thing. We invited them to join us and Rob and Jen for dinner on La Luna that evening. When we suggested they show up at six, John quickly asked, “The real six or the hour one-hour-later six?”  We deserved that. 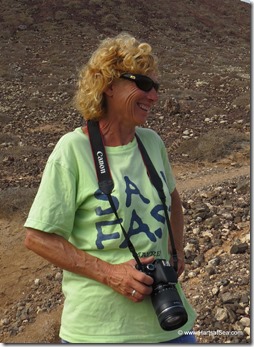 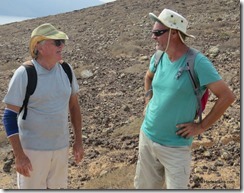 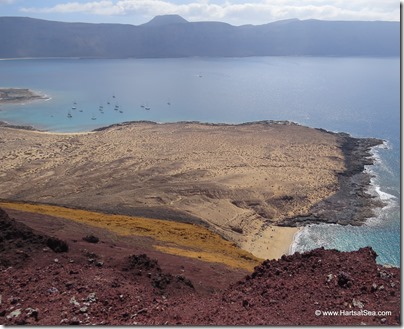 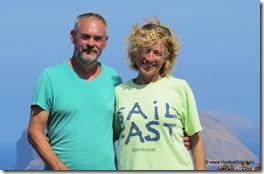 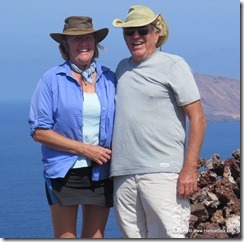 Gill (pronounced “Jill”),  John with EW, EW and John checking out the marker at the top, with Jill taking a photo for her blog, view of the anchorage, and photos of the two couples.