What Would You Have Done?

Here are some multiple choice questions for you sailors and cruisers out there.

1. If you need to repair the dinghy, using various forms of toxic substances and goop would you..

A. Wear quality shorts – the kind that have zip off legs and become pants?

B. Change into work shorts that have been stained and torn?

2. If you opted for B and gotten white 5200 Fast Cure on both legs of the shorts, would you?

A. Ball them up and place them in the sun in the cockpit in a manner that does not allow the 5200 from adhering to the wood?

B. Tell the half of the crew that is adept at removing stains so that she may work on them?

Note, in both cases, B is the right answer.

As you may have surmised, EW opted for A. In both cases. At least he prevented anything else from getting gooped.

I was nearing the end of my laundry morning, and was heading up to put the final load into the drier, when I discovered the shorts. Truthfully, EW had mentioned that he’d gotten stuff on his shorts and “should have changed before starting this job.”

He also said that he was planning on throwing out those shorts on his next trip ashore. First, he was going to make and eat his lunch.

I, being the consummate sailing partner stopped everything, got out some work gloves and towels, and used toluene (proffered by EW between bites), to get almost all of the goop off the shorts. (In fact, if he had been able to answer “B” in question 2. I might have been able to remove all of the goop. Then I put them in my small bucket to soak in a lot of water and a bit of Amazing Roll-Off.

I am reminded of when Favorite lived with us. Early in his high school years he opted for the low-hanging, three- sizes-too-big, and six-inches-too-long pants. As girls became more important, he developed a desire to not look like an idiot and chose a great pair of jeans that actually fit. (His three parental units were thrilled.) Unfortunately he wore them to work at the chandlery (not a bad choice) and spilled a can of bottom paint on them (An accident, but not a good move), went home and called me immediately. (Excellent choice.)

I directed him in soaking the pants until I got home from work. It took three washings and a huge amount of an organic cleaner we had on hand, but those jeans looked like new when I was done. Favorite did it right.  EW knew all about it, but apparently didn’t learn from Favorite’s example.

Good thing I love him.

1.  It seems on this cruise that we have been getting along so well and acting so in tune that I find little to complain about in my usual funny manner. I miss that – and I can think of a few friends who miss it, too.

2. When I nominated Neil Strenge and his blog Mishaps and Memories for the Liebster Award he was very kind in mentioning my book and blog, saying: Barbara is living the dream, and set off from Maine for  life aboard. Barbara writes with a witty, easily read style that will have you laughing our loud!.. and has a book, Harts at sea, that I highly recommend. Her descriptions of the obviously, ever so patient, EW are entertainment in their own right!

That “ever so patient” description of EW is a lie. EW is loving, talented, and good-looking; he has a great sense of humor, has only once ever complained about a blog post, and is resigned to being “the topic.’ He is not patient. (Neither am I but I haven’t been described as such in a popular blog.)

3. I forget the third reason – guess only two were important.

I’m not sure whether the shorts will be entirely 5200-free, but they will be wearable in public and will not yet become boat project only shorts. That’s the important thing.

Well, that and I still love EW. 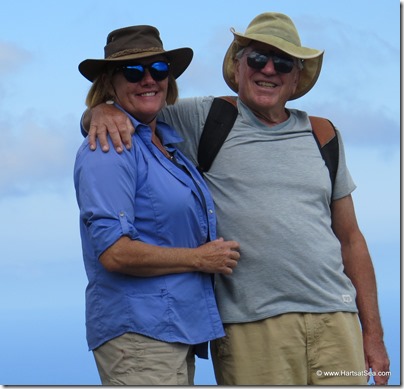 I'm firmly on EW's side!

A good pair of shorts need to look lived in. They MUST have epoxy, antifoul, paint, and 3 different varieties of varnish on them to even qualify for short list consideration....

EW says you are "my kind of guy". He's still thrilled you think he's patient.

Cheers from our last night in the Azores.