Home Archives Profile Subscribe
What Do the Azores and New Bedford Massachusetts Have in Common (Besides Whaling)?
We Finally Met REAL Tourists in the Azores

Sailing in the Azores

Let’s talk about sailing. After all, we’re on a sailboat and many who follow are sailors.

There is wind here, and sometimes it’s from the direction they’ve predicted and we’ve planned for; sometimes it’s not and we get skunked. We got skunked when we left Horta with the intention of sailing to Flores, and ended up in Sao Jorge, instead. The trip from Velas, Sao Jorge to Angra, Terceira took many hours longer than it should have and required us (well EW) to motor back and forth outside of the bay, waiting for daylight.  I discussed this with Felipe, Harbor Master at Angra who suggested a local source for weather. He told me that Passage Weather and other such sites aren’t as useful here because, “We are just a tiny speck in the ocean, and they look at the whole ocean.” Using “tiny speck” weather sources, we left Angra for Graciosa on August 22nd and again ended up motoring much of the way with light winds and swells from the south.

I was down below when EW called, “We have a big problem! Get up here!” I got up there.

Our jib was furled, but the main was out to reduce the sea motion, and the outhaul had parted from the sail. 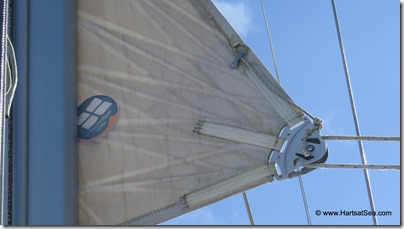 NOTE to non-sailors. Our sails are right triangles. The point at the top is the head, the bottom is the foot, and the edge of the sail that goes from the top of the mast to the corner out on the boom is the leech. That corner where the foot and leech meet is the outhaul. Our sail is “loose-footed”. It furls into the mast, and is attached at the bottom (foot) only at each end of the foot: at the mast (clew) and at the end of the boom via the outhaul.  A plastic and metal contraption designed to hold the sail out on the boom is attached to the outhaul via strong fabric tape that is threaded through slots in this contraption and sewn to the sail. OK? (Here’s a photo from another boat with the outhaul tapes exposed.)

All of the stitching on those tapes ripped. All of it. The outhaul mechanism and the tapes were attached to the boom and the sail was flapping in the breeze.

As problems go, it could have been a lot worse. In the light winds we simply took the sail down and piled it on deck, then we stuffed her below in the forward cabin. Repairing the sail waited a few days until I was  mentally ready. The sewing machine had problems at the start, and got progressively worse. At the outhaul, the sail is a sandwich of sailcloth, a hard plastic “board”, more sailcloth and a very old sun cover. The webbing was stitched through these layers. I took some sailcloth we had on board and made patches over the old sun cover, struggling with the recalcitrant machine. By the time I was ready to actually sew the all-important tape, the machine quit stitching altogether. Praia in Graciosa is a beach/fishing harbor town on an island with just over 5000 people. We didn’t even try to find a sail-maker there, and decided instead to sail back to Horta, where we knew there were at least two sail repair/canvas shops.

I used Felipe’s preferred weather site and we learned that the winds were again going to be light and maybe in the wrong direction.With only one sail, we were resigned to motoring to Horta. Unfortunately, I missed Cristobal. You know, that recent named storm in the Atlantic? The day we sailed from the island of Graciosa to the island of Faial, was the day that our little speck in the ocean was under attack from two fronts. (Is it because they attack that they call weather systems fronts? I just thought of that.) We pulled anchor at 8:15, motored around the southern tip of Graciosa, and by 9:30 were sailing in flat seas in S/W winds of 5-8 knots. We were averaging 4 knots which would allow us to get to Horta before dark.This was going to be a good day at sea, despite the injured mainsail.

By noon, we had 8-10 knots of wind and seas that were 1-2 feet. I thought about baking something and decided instead to make risotto for a hot lunch. We dined on deck with Casey the trusty auto-pilot steering the boat. (This is Sao Jorge and the lighthouse at Rosais Point. That’s that little tiny stick up top.

One hour later, we had SSW winds at 25-30 knots  and were screaming along at 6.7 knots under the jib alone. It was still a good sail. As we rounded the northeastern end of Sao Jorge,  we had seas at 3-5 feet with the occasional wave breaking on the hull and splashing the cockpit. We reefed the jib, EW decided to hand steer, and I grabbed his lightweight water-proof jacket and our tethers.

It was never dangerous. We had visibility, we had control of the boat, and she wasn’t heeling much. For most of the afternoon, we were able to beat on our actual course, in 20-35 knots of wind and 3-6 foot seas. The winds abated at one point and we shook out the reef. An hour later we put it back in. EW hand-steered, I handled the sail, and we both got a workout. Before 1700 (5:00 PM for the LL’s) the winds turned more on the nose and the waves rolled over the bow and down the decks. We were less than 10 miles from the passage between Faial and Pico when we reluctantly decided to furl the jib and start the engine. For the next two hours we plowed into the wind and waves, on our course to Horta in 25-35 knots of wind with 40-knot gusts. 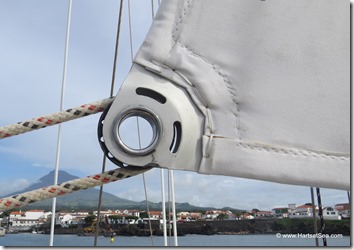 Two hours later we anchored inside the first break wall in Horta, had a snack and went to bed. By no means had this been the perfect sail, but it hadn’t been a horrible day and we certainly made good time for most of it. The next morning, a Friday, we checked in to the marina, walked up the hill to Ralf’s sail “loft”, and made an appointment for 10:00 on Saturday. He returned the fixed main at 10:00 on Sunday. He had cheerfully worked around my amateur repairs, and even suggested that I had done well with the patch. As he had suggested, he covered the outhaul tapes and my patch with Sunbrella, to protect the stitching. (He said he has no idea why all sail-makers don’t do that. Now that we’ve spent three years in the Caribbean, neither do we.) We had asked that he look at a section of the leech that needed to be re-stitched. (I hadn’t gotten that far.) Instead, he took about an inch off the entire leech and remade it, then he covered that with Sunbrella, as well. Finally, he gave us the good news that this was a sail in good condition and should last a number of years.

Here’s the lighthouse on Sao Jorge – rather unimpressive. We much preferred the view from the point. 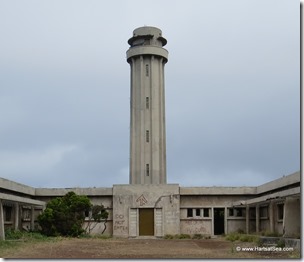 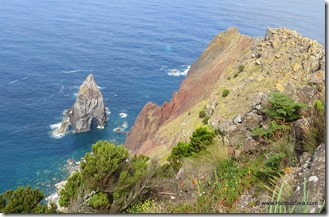