Holy Cow! Daddy, This One's For You.

The above photo from Sao Miguel is a typical scene in the Azorean countryside. As is the one below from Sao Jorge.

Note that the cows are grazing in distant pastures. If the “cows” are beef cattle, steers, or too young to milk, then it’s not an issue. From our first glimpse of the pastures in the Azores I marveled at how they milked the cows on these tiny islands.

First a bit of background, Daddy (yes I know I’m too old to call him Daddy, but you will just have to deal) worked for H.P. Hood for over 25 years. He started in Skowhegan, Maine when he was a young widower with three children, and needed a job that would allow him to be home every evening. His first job at Hood was to haul the full milk cans off the trucks, and put the cleaned cans back on for the next trip to the farms. I assume he also hauled those cans into the plant and dumped them into vats for processing.

When Hood wanted to modernize, Daddy was promoted to field-man (that was the term then, and they were all men) and became the company’s liaison to the farmers. His first task: to convince the farmers to build new, cement floored milking parlors and to purchase and install surge-milkers. I was his youngest and the child of his second marriage, so I just heard about this. I was also the only one of his kids not to live on a farm at some point. I was his “city kid”. Still, he took me to visit “his” farmers and told me many stories. (I remember a coffee mug from the era (one of two that Mom considered “off-color”) depicting a happy farmer with his arm around a sub-standard cow. The caption: “If I had only one cow and she had only one teat, I’d STILL used my surge-milker!)

The point is that I’m not entirely ignorant about milking cows and knew that these generally modern islands ---with WIFI, hybrid vehicles, wind and steam power generating plants, and jet ski races --- were milking cows and transporting milk the old fashioned way. We saw trucks with milk cans and small remote milking parlors, some portable, on every island, but I hadn’t seen them milking the cows until Jose took us for a drive.

We met Jose in Graciosa when we were at anchor and when he and his wife were on vacation. They had one of the very few transient slips in the marina and sailed past our anchorage one evening, jib and main full and heading for the sharp turn into the marina. I took photos of their boat under sail and stopped by the next day to exchange emails. Jose was delighted with the photos and to learn that we were planning on visiting Sao Miguel. He came to our slip after our arrival and offered to spend his last vacation day taking us for a drive. (Have I told you that I love the Azores?) The weather is frankly lousy this week with a huge nasty front to the north, low clouds over the mountains, and a constant threat of rain. 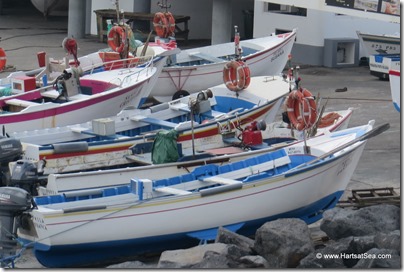 Jose drove us further east along the southern coast to Vila Franca de Campo, where he was born, and where we wish to visit via sailboat before we leave. 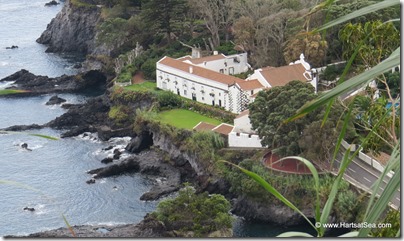 Along the way, we stopped at fishing villages, viewpoints, and beaches. He told us to let him know whenever we wanted him to stop, but he did just fine on his own. 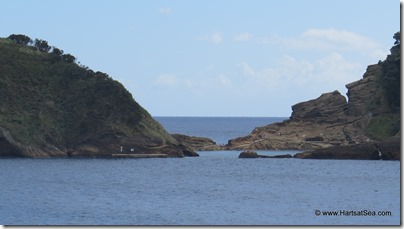 After Vila Franca, Jose drove north over the hilly/mountainous/crater-filled middle of the island on increasingly smaller roads, taking us deep into farming country. We rounded a bend to see this: 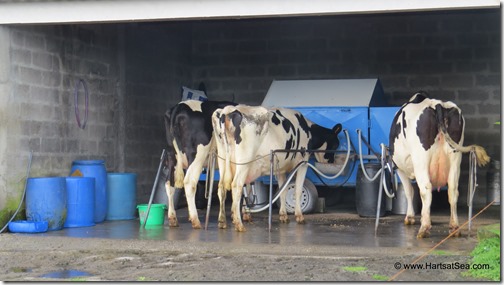 Jose pulled over, disregarding the smell, the wet road dotted with cow leavings, and what I am sure was an unusual request. The farmer was cheerful, but indicated he didn’t speak English. I was bouncing, and EW was resigned to a Barbara Moment. (That’s how we roll.) 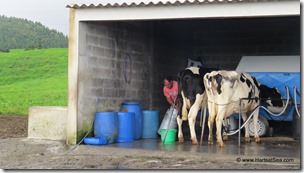 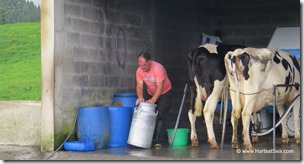 Cows everywhere know when it’s time for milking, which usually means increased comfort (think about it) and food. They wander on their own to the milking parlor to meet the farmer. In some cases, the farmer must unlatch a gate to let them wander along the road to the parlor, but this shed seemed to be inside the pasture. The lady at left had been milked, released from the surge-milker, and decided to head back to the herd. 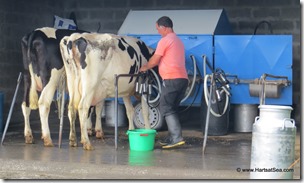 The farmer set the can at the entrance to the shed, took care of another cow, and then picked up the can and moved toward us. (Even in my excitement I had the presence of mind not to go beyond the paved road to the muddy/xxitty area outside the shed. That’s what zooms are for.) 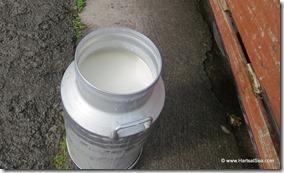 “Oh yes, Please!”  My mother was was a clean freak and I have just enough of her in me to have looked around for little cups, or a ladle.

Nah!  The farmer took off the lid, tilted the can, and filled her up, offering me the first sip. 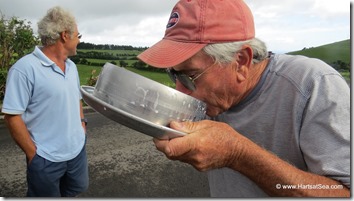 I passed it on to EW, who drank deeply, and passed it to Jose, who is a really, really good sport and who got milk on his nose.

We didn’t drink all of the milk, so the farmer simply dumped it back into the can. I’m sure they pasteurized the milk at the processing plant, right?

Here’s something I didn’t know – EW had never had fresh milk, and he’d never ever had warm from the cow milk. He was almost as delighted as I was. 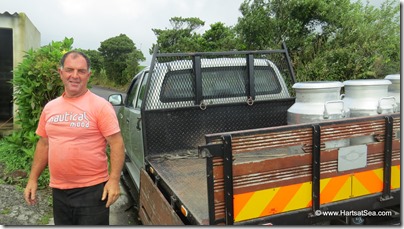 The farmer seemed happy, too.

EW and I endeavored to clean the bottoms of our shoes before getting back into Jose’s car.

Jose took us over rutted washed out roads, past magnificent views, pastures, and volcanic craters.

He drove down one into a valley with a stream where there had been a spring water bottling plant when he was young.

We visited Ribeira Grande on the north shore, and returned over the mountains through the clouds, stopping at other sites along the way.

Back at the marina we invited him to the boat for refreshments, where he wanted to try some Caribbean Rum. Go figure. We were, of course able to comply. We had offered to pay for gas, but he had refused. Once on board we offered him a bottle of maple syrup. He has family in Canada and he knows and likes maple syrup. We were all happy. It was a happy kind of day. And I got to cross “See a milking parlor” from my Azores Bucket List. 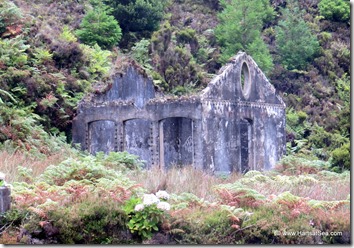 The old spring building for the bottling plant. 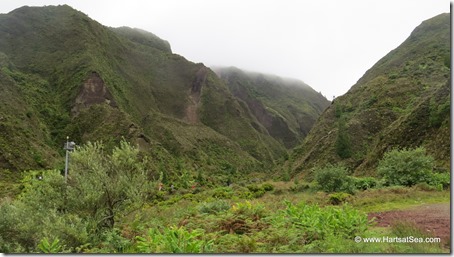 One of the views from inside the crater. That pole on the left side is one of the seismic monitors. 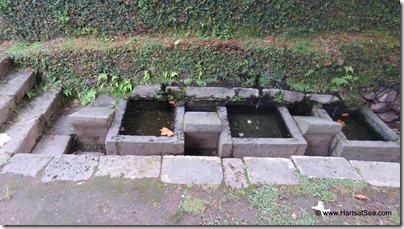 Do you know what this is? It was always conveniently placed at a crossroads or near a small group of homes – if  the ladies were fortunate. 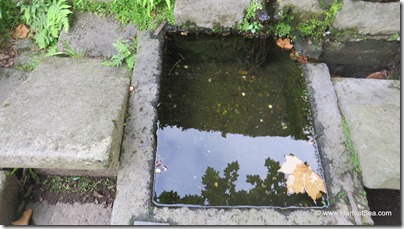 Three ladies at a time could gather near the stream and wash clothes. The slanted stone at the left of each “tub” was for scrubbing. We had seen one of these in Terceira where they had cut grooves into those stones for better scrubbing power. This evidently was easier than toting water back home for laundry – and certainly more social.

Good to know there is someone else out there who's too old to call their father Daddy but still does. I am still trying to train my 33 year-old son not to do it - at least when anybody else is listening. I think the ultimate solution is going to be that almost everyone in my family (of all generations) is now calling me Grandad. For some reason that sounds a whole lot better than Daddy.